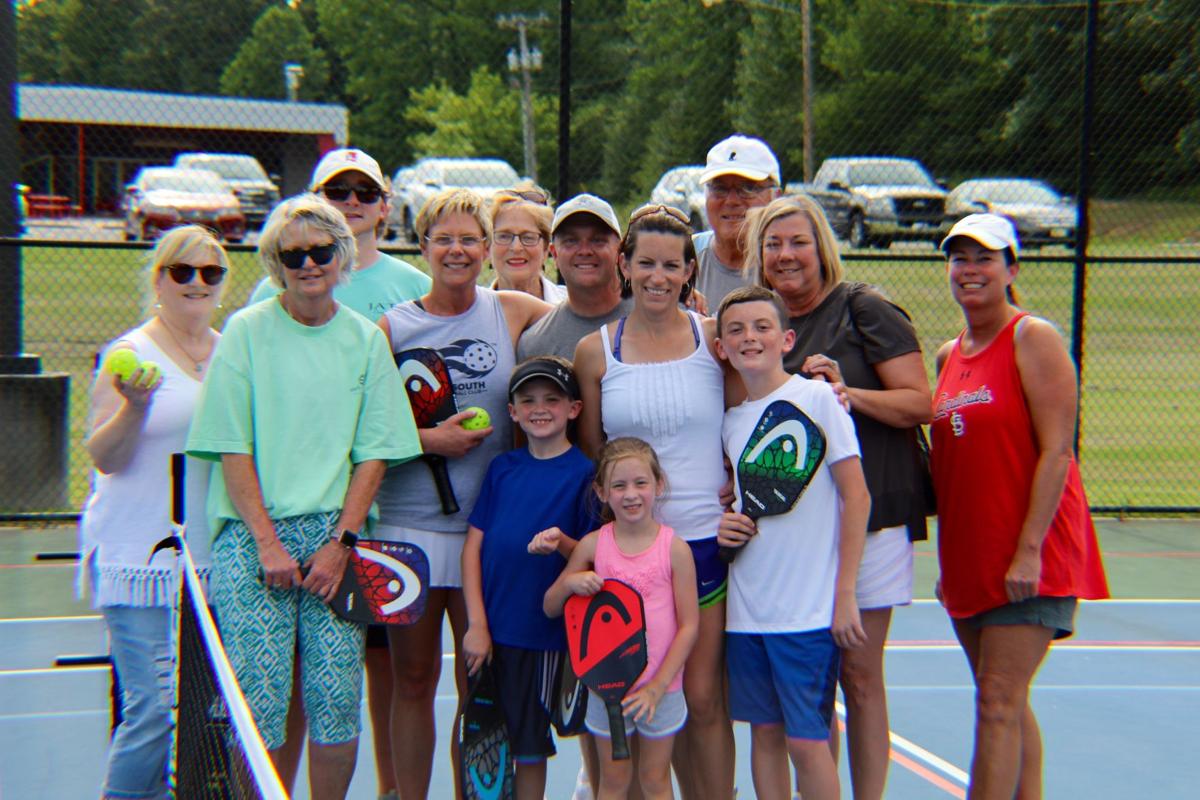 Taylor Taylor (fourth from left) is joined by some of the nearly two dozen players who came out for the first Pickleball and Pizza event Saturday at the Southaven Tennis Complex. Another event is planned for July at the Snowden Grove facility. 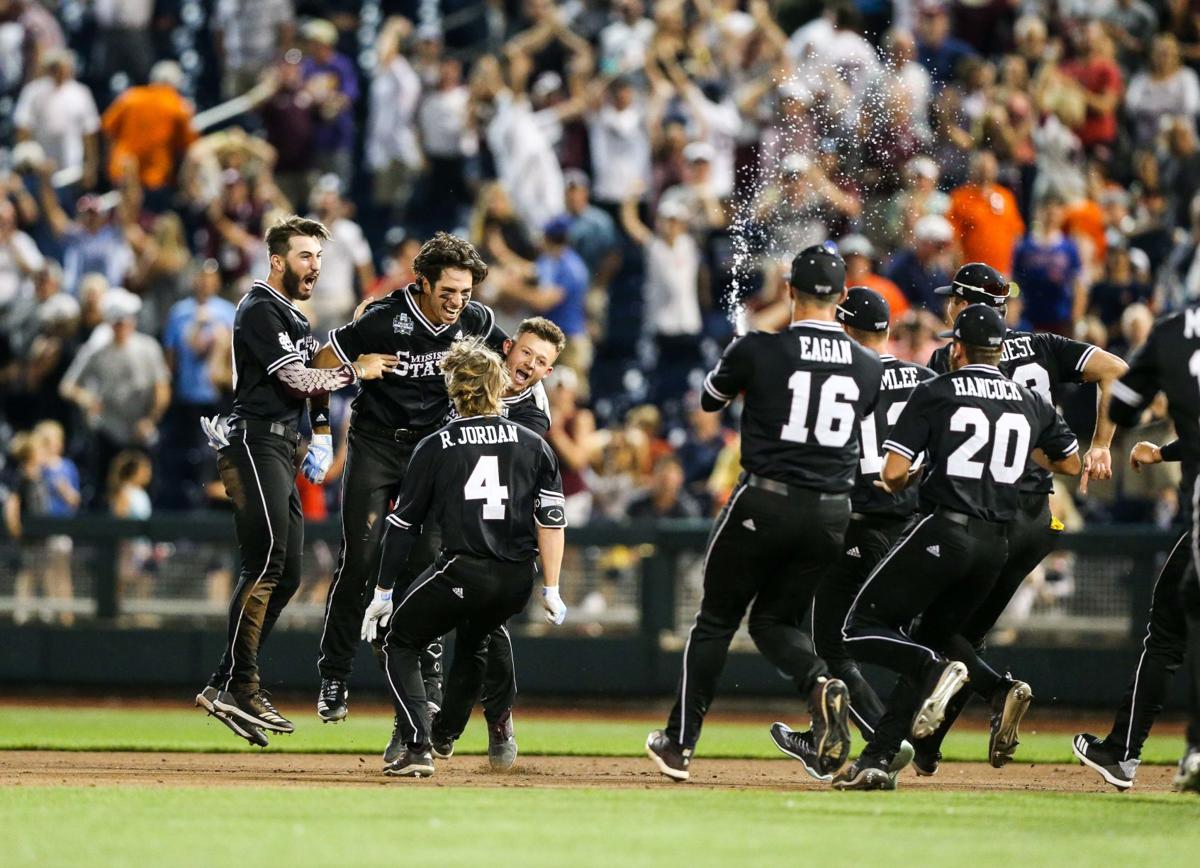 Marshall Gilbert and the rest of the Mississippi State Bulldogs celebrate after Gilbert’s bases-loaded infield hit brought home Olive Branch native Dustin Skelton with the winning run Sunday night at the College World Series. The Bulldogs rallied with four runs in the bottom of the ninth to defeat Auburn 5-4 and stay undefeated in the NCAA national tournament at Omaha, Neb.

Taylor Taylor (fourth from left) is joined by some of the nearly two dozen players who came out for the first Pickleball and Pizza event Saturday at the Southaven Tennis Complex. Another event is planned for July at the Snowden Grove facility.

Marshall Gilbert and the rest of the Mississippi State Bulldogs celebrate after Gilbert’s bases-loaded infield hit brought home Olive Branch native Dustin Skelton with the winning run Sunday night at the College World Series. The Bulldogs rallied with four runs in the bottom of the ninth to defeat Auburn 5-4 and stay undefeated in the NCAA national tournament at Omaha, Neb.

In a place where there’s growing excitement about tennis, especially with the expansion of the Southaven Tennis Complex at Snowden Grove, now comes a net game option for those of us who can’t run up and down the baseline like Serena Williams or charge the net for a smash like Roger Federer.

Taylor Taylor has more than three decades of tennis experience and was with the Racquet Club of Memphis as a marketing executive and teaching professional before the club closed this spring.

However, knee surgeries a few years ago ended Taylor’s time at the net until a co-worker mentioned a new game for her to funnel her sports passion: pickleball.

Saturday, Taylor introduced the sport to close to two dozen potential players on a couple of courts at the Snowden Grove facility in Southaven. They seemed to catch on to the game quickly and Taylor was her effervescent self about pickleball, which she said is a game meant to be played by all ages.

The name is intriguing in itself. USA Pickleball Association notes the game originated outside Seattle, Washington in 1965 and the association website offers scenarios on how the name came to be.

One involves the combination of sports in the game that somehow reminded them of a pickle boat. Another is that three dads invented the game for their children to play and one of the inventors had a dog named Pickles. A third option is a combination of the two.

Either way, Taylor points to pickleball as a game that combines badminton and ping pong using a net that resembles a modified tennis net.

“Pickleball is a game that’s played on a badminton-size court,” Taylor explained. “So it’s 20-by-44 feet and it’s played over a tennis net, or what looks like a tennis net, with a solid paddle and a wiffle ball, something that is a little thicker than an actual wiffle ball. It’s scored like ping pong.”

Pickleball, when played well, is not a game of “dash and smash.” Taylor said good players are disciplined and patient.

“The goal is to work your way and then hit a shot that’s called a dink, an unattackable shot,” Taylor said. “You need to be very, very patient and be very disciplined. It’s not about power, it’s really about patience, discipline and touch.”

Another term you’ll hear a lot in pickleball is called the “kitchen,” or what Taylor said is called the non-volley zone. It is the area seven feet away from the net no one wants to be.

Pickleball coming to DeSoto County is due in part to conversations Taylor has had with DeSoto County Tourism Executive Director Kim Terrell and Sales Director for Sports Chip Cossar, who both see pickleball as another recreational sports option that could potentially bring players and tournaments to the area.

The Mid-South Pickleball Club had a home at the Racquet Club before it closed, but now is looking for a permanent presence in the area. Taylor believes that home could be in DeSoto County.

I started a conversation with Kim (Terrell) because I’m really passionate about growing the sport but we also do need some dedicated pickleball somewhere,” said Taylor. “We’d love to see DeSoto County be the first one to put in something dedicated. If not, putting lines down on the tennis courts is a great option.”

If you missed “Pickleball and Pizza” Saturday at the Southaven Tennis Complex, they will do it again at the same place on Saturday, July 13, starting at 4 p.m.

SPORTS ETC.: Mississippi State plays number-two national seed Vanderbilt Tuesday at the baseball College World Series after a four-run Bulldog rally in the bottom of the ninth inning defeated Auburn 5-4 Sunday night in Omaha, Nebraska. Mississippi State, the number six national seed in the tournament, trailed 4-1 heading into the final inning. However, Marshall Gilbert’s infield hit with the bases loaded brought home the winning run and sent the 52-13 Bulldogs into the winner’s bracket semifinals against another SEC rival in the Commodores.

Catcher Dustin Skelton, of Olive Branch and Magnolia Heights, hit safely in two of four at bats for the Bulldogs and scored twice.

Skelton’s two-hit performance was his 17th multi-hit outing of the season and it was his run in the ninth inning that was the game-winner for the Bulldogs.

MSU reliever Riley Self, another Magnolia Heights product, faced three batters in one inning pitched and struck one out.

Game time Tuesday for MSU and Vanderbilt is 6 p.m. Central time at TD Ameritrade Park. ESPN will have broadcast coverage.

Arkansas, which Saturday lost its opening game to Florida State 1-0, played an elimination game Monday afternoon against Texas Tech with the loser being ousted from the tournament.

Bob Bakken is Sports Editor for the DeSoto Times-Tribune.