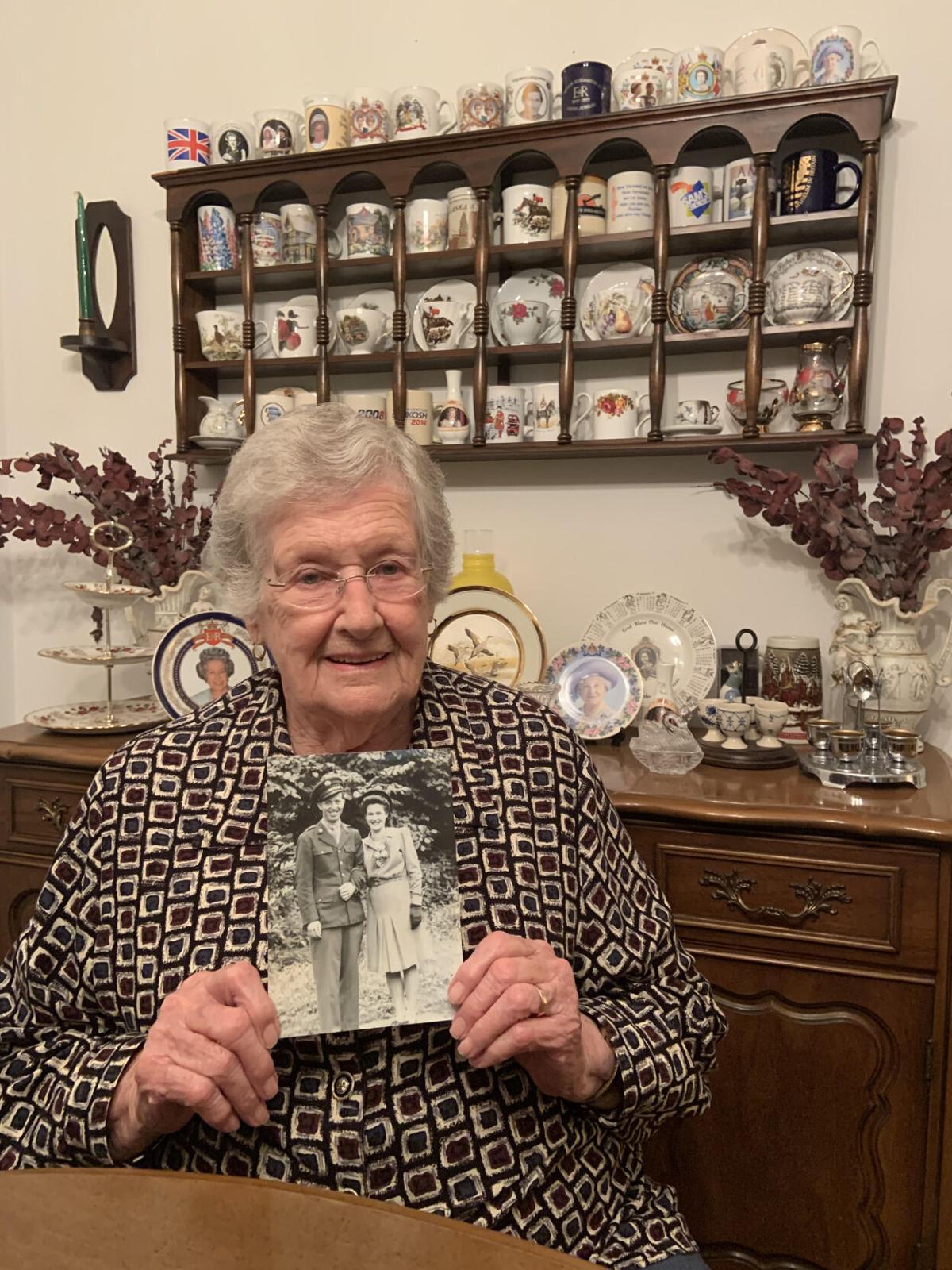 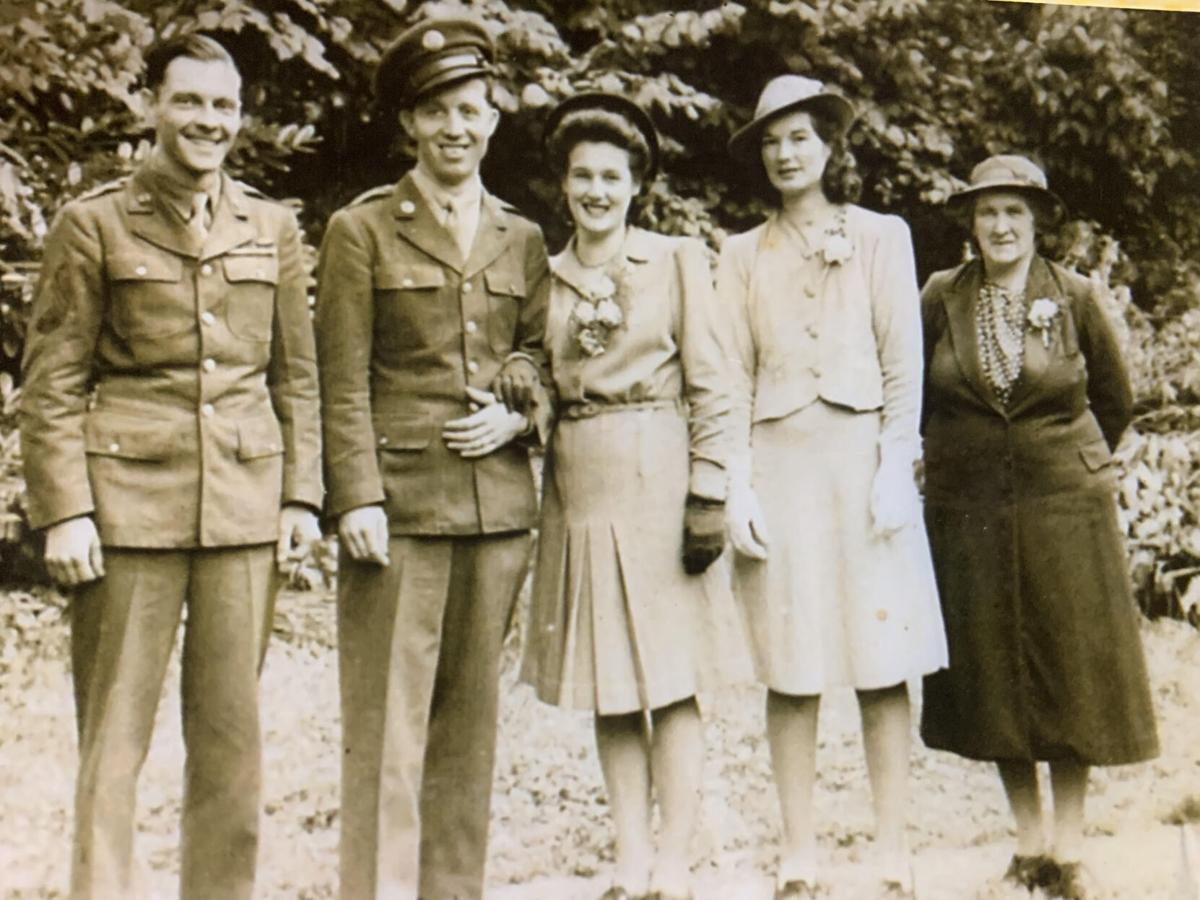 ean became a “war bride” when she married Irue Jones who was serving with the Eighth Air Force in England during World War II.

ean became a “war bride” when she married Irue Jones who was serving with the Eighth Air Force in England during World War II.

Jean Jones remembers being instantly attracted to the handsome “Yank” that she met at a party in Norfolk, England during the war.

Jones was 17 at the time and lived in King’s Lynn, a town about 98 miles north of London and six miles from the air base where Irue Jones was stationed with the famous Eighth Air Force.

Neither of them danced, so they spent the night talking about their lives. Irue’s family was originally from Macon, Tennessee, but lived in Memphis. Her own family endured food shortages and constant bombing raids by the Nazis.

“We sat at a table and talked,” Jones said. “After that he said can he see me again? And he did. From there on out we went together.”

England was on its own when war broke out in 1939. Jean, who is 94 years-old today, was 12 years old and remembers listening to the news on a neighbor’s radio.

“They had a battery operated radio,” Jones said. “And they had this great big window. People were standing around listening to Winston Churchill give a speech. He said ‘and now we are at war with Germany.’ I will never forget that.”

For the people of King’s Lynn and the surrounding cities and towns in County Norfolk, that meant that most of the local boys would be going off to war.

It also meant severe rationing of all commodities.

“We had one egg per person, per week,” Jones said. “We had two ounces of margarine, and a little bit of everything. Once that was gone, you couldn’t get any more until the stamp came due for next week. Even the restaurants didn’t have a lot of food. The restaurants served a lot of pork and beans on toast or eggs on toast because they couldn’t get meat.”

Homes were also under total blackout conditions so as to not give the German bombers anything to guide by.

“You couldn’t even have a sliver of light showing or the local air raid wardens would fine you,” Jones said.

When the United States joined the war following the bombing of Pearl Harbor on December 7, 1941, Norfolk became the staging area for the Eighth Air Force and the B17 Flying Fortresses and B24 Liberators which flew deep into Nazi Germany on bombing runs.

Tens of thousands of U.S servicemen arrived in Norfolk in 1942, mostly the crews and support staff of the heavy bombers to work at the 17 air bases located throughout the county.  The once sleepy Norfolk became “Little America.” The American GI’s transformed the culture, bringing to the ration starved local populace items like peanut butter, donuts, chewing gum, popcorn, Coca Cola, dances like the jitterbug, and nylons for the English lasses whose men were off to war.

To the English women, the clean-cut, handsome Americans were a breath of fresh air with their happy-go-lucky demeanor and access to food, cigarettes, and chocolate.

“The Americans came in and they took over and put air bases all over,” Jones said. “They were everywhere. In the evening the planes would go out and dot the sky. There were so many going out to bomb Germany. And the Germans were coming over and bombing us.”

Irue was attached to the military police and would bike the six miles to see her on his day off, often bringing hard to get food items along with him.

The two saw each other at least once a week and would go sight seeing on their bicycles exploring the countryside. As their relationship deepened, Irue asked her to marry him a few months later.

Jones said she never imaged that she would ever marry a “Yank.”

Surprisingly, her parents did not object to her marrying an American.

“I had a step-father and it wasn’t a problem,” Jones said. “My mother didn’t particularly like it, but she didn’t oppose it.”

Although frowned upon by the US armed forces, more than 60,000 women married US servicemen during World War II. Most would have to wait over a year though to see their husbands after the war ended due to the restrictive American immigration policies, which had strict quotas for immigrants from Europe and Asia.

Irue was shipped back home following the end of the war and Jean wouldn’t be reunited with him until July 4, 1946. She passed the year by working in a bakery.

“It seemed like a long time,” Jones said. “But I had a job and when you work, time seems to fly. We kept in touch through letters. I told him I wasn’t going to live with his family. So he rented a small apartment in Memphis several months before I got there.”

By 1945, politicians in Washington, D.C. were  facing growing pressure from returning servicemen to bring their new wives to America.

Finally, on Dec. 28, 1945, Congress passed legislation that became known as the “War Brides Act” which fast tracked admission of military spouses and their dependents, who were exempted from the immigration quotas.

The first group of war brides to arrive in the US came from Great Britain on January 26, 1946. Jones sailed aboard a former hospital ship from Bournemouth to New York City.

“We got to the hotel in Bournemouth and stayed there about a month because they kept canceling ships,” Jones said. “Finally they got us on a ship and I think it took eight days to cross. There were three of us in the cabin.”

Jones then took a train to Memphis and remembers her reaction to eating southern food for the first time.

“There was another girl and I who bunked together on the train,” Jones said. “We hadn’t eaten a thing. Finally we got hungry and we went to eat. We looked on the menu to what was on there and saw that they had muffins. So we had a cup of tea and a muffin.

Irue met her at Central Station. As they were driving to his apartment she was shocked to hear loud booms.

“It was fireworks because it was the Fourth of July,” Jones said.

Jones said she didn’t find it hard to adjust to her new home in America. Still, there were a few things in the market that she wasn’t used to seeing in England.

“I’d go to the grocery store with my daddy-in-law and mother-in-law at different times and I’d ask them, ‘are those turnip greens?’” Jones said. “He said ‘yes, that’s turnip greens.’ I said ‘well, what do you do with them?’ He said ‘we eat them.’ I said ‘we feed them to the cows back home.’”

Irue was part of the pipe fitters union and worked making propane tanks. Eventually the couple moved from their small apartment to a larger apartment on Vance Avenue. Irue later bought a piece of land on Pidgeon Roost Road off Highway 78 in Memphis and built a small two room home, which they added on to gradually using the money he earned working overtime to buy the lumber.

“The man that we bought the lumber from was very nice,” Jones said. “He said any time we needed some more lumber to come and get it. So we did. We paid every penny that he made from overtime. Then we added on another bedroom and a bathroom, a hallway, kitchen, and a dining area.”

They also bought the lot next door and built a block home for her in-laws.

As work became harder to find, Jones said Irue started buying trailers which he would then refurbish and sell. Other jobs took them to places like Ohio.

She still lives on the eight acres that Irue bought on Odom Road in Hernando in the 1960s where they raised their two sons.

Jones made many trips back home to England over the years with Irue and the children, and has also traveled to Alaska and New Zealand, where her nephew lives. She still has a fondness for the land of her birth, and has a big collection of teapots, spoons, and mugs which she displays in her home.

Jones said she is very proud of the fact that she made a new life in America and became an American citizen.

“That was something that we were so proud to earn back then, when you become an American,” Jones said.