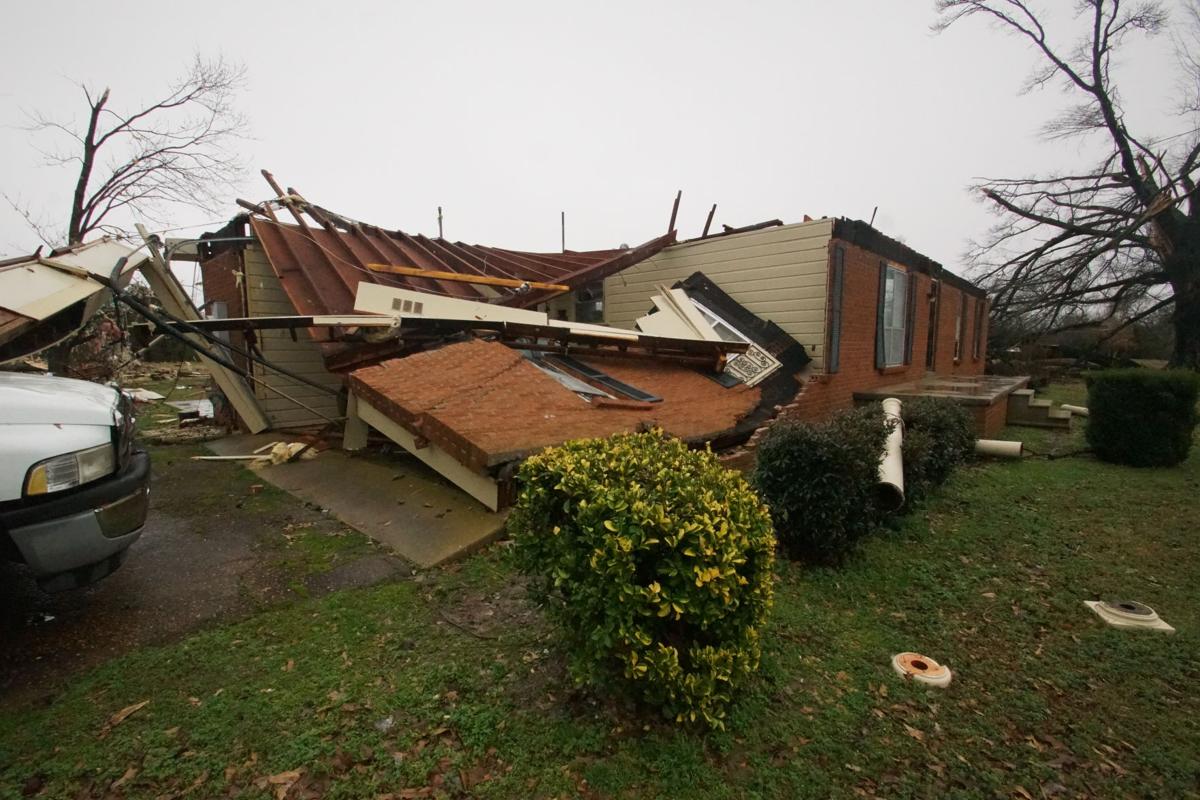 This home along US Highway 51 in the Love community south of Hernando is one of the structures that sustained damage from the storm system that went through early Saturday morning, Jan. 11. Damage was sustained in the area and also in the Lewisburg area from the storm that reportedly also produced a tornado. 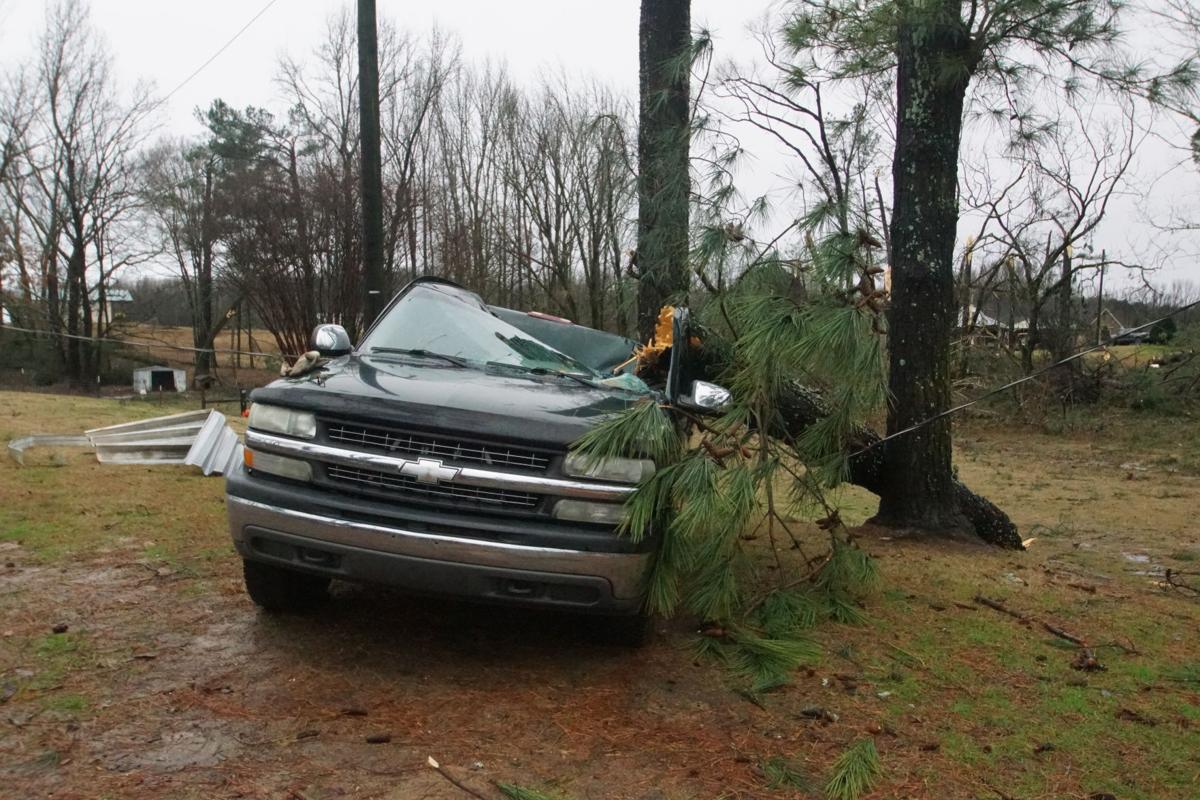 A tree felled by the storm system early Saturday morning, Jan. 11, damaged this truck parked at a home in the Love community south of Hernando. Homes and other structures were also damaged, while felled power lines caused thousands of residences to lose service in the storm's aftermath.

This home along US Highway 51 in the Love community south of Hernando is one of the structures that sustained damage from the storm system that went through early Saturday morning, Jan. 11. Damage was sustained in the area and also in the Lewisburg area from the storm that reportedly also produced a tornado.

A tree felled by the storm system early Saturday morning, Jan. 11, damaged this truck parked at a home in the Love community south of Hernando. Homes and other structures were also damaged, while felled power lines caused thousands of residences to lose service in the storm's aftermath.

DeSoto County Emergency Management officials Saturday were in the beginning stages of damage assessment after a dangerous storm system struck the county.

In the storm's aftermath, Mississippi Gov. Phil Bryant has declared a State of Emergency in Mississippi.

"State assistance will be necessary to support state and local governments’ response to recovery efforts," Bryant said. "We are accessing damages and will take the necessary steps to help those affected by the storm. We are fortunate that no loss of life occurred due to the severe weather."

Meanwhile, residents in the Love and Lewisburg areas in particular were also looking at the damage and starting to consider what needed to be done in recovery, as at least two tornadoes appeared to have touched down. A third tornado touch down was reported in Marshall County between Holly Springs and Senatobia. The National Weather Service, as part of their damage assessment, still need to officially determine if they were actually tornadoes. Early indications are that they were tornadoes, however.

The most significant damage from the storm that struck at about 4:30 a.m. occurred in the Love community south of Hernando off Highway 51 and in the Lewisburg community north of the schools.

“The storm went through the Love area, crossed over I-55 and then into the Lewisburg-Olive Branch area,” said DeSoto County Emergency Management Agency Deputy Director Josh Harper. “It all started about 4:30 this morning.”

Tornado warnings were issued by the National Weather Service and sirens began being heard across the county as the fast-moving storm came through.

“We had rescue crews out and had to perform a couple of rescues,” Harper said. “We are now starting our preliminary damage assessments. There’s spotty damage in other places that were not part of the path of the tornado from straight line winds and stuff like that.”

Harper said he was only aware of one injured person as a result of the storm who needed to be taken to the hospital for treatment.

Highway 305 between Bethel and College roads was also closed.

Reports of damage to homes located north of Lewisburg High School were received. The storm also caused damage to the baseball/softball complex at the high school, where bleachers were overturned and fencing was brought down.

As of noon Saturday, there were reports of about 3,800 Entergy customers without electricity, according to spokesman Don Arnold.

“Most of the outages are south of Hernando and around the Lewisburg area,” Arnold said. “We will be assessing damage throughout the day. Additional crews are being sent to help with the restoration”.

Kevin Doddridge, Northcentral Electric Power Association CEO, said initially as many as 13,000 cooperative members found themselves without power. As of early Saturday afternoon, that number had dropped to about 2,500.

“Some of that was caused by some TVA transmission problems as well,” Doddridge said. “We’re trying to do some switching where we can minimize the effects on the consumer while we do this, but the last 2,500 will be slow getting power restored.”

About 30 poles with multiple circuits on them were broken, which will make that restoration more complicated. About 100 Northcentral employees responded to restore power, Doddridge said.

Sam Rikard, meteorologist for Olive Branch’s OBTV, said the rainfall was around 1.5 inches in the area, but the winds were strong.

“I have eight weather stations scattered around town and the highest wind that one of those picked up was 51 miles-per-hour at about 5 a.m.,” Rikard said. “All of those stations are to the north of where the tornado came through. The winds in those areas were obviously much higher.”

Rikard added there were areas of structural damage along College Road in the city of Olive Branch, including trees and power lines.

Lewisburg Volunteer Fire Department Fire Chief David Linville put out a call on social media for anyone with chain saws to come and help in the clean up.

In the Love community, the vicinity of Hernando Point was where the tornado touched down, damaging homes, trees, and power lines. As it traveled, it seem to hopscotch along its 30 mile route through the county.

“Homes and properties along Gaines Road were hit pretty hard,” said former DeSoto County School District Supt. Milton Kuykendall, who lives in the area and was helping clean up debris. “We have significant tree damage, broken fences, power lines down, along with building and property damage.”

The Love Fire Department was being used as a command post and volunteers from local rescue units and county teams converged to coordinate search and rescue efforts. An occasional fire truck was dispatched with sirens filling the air as the unit raced down the highway and side roads.

In the same area is the popular Cedar Hill Farm agri-tourism attraction that is owned and operated by former state Rep. Robert Foster.

Photos of the damage were posted on their social media with Foster writing in a Facebook post,

“The farm sustained a lot of damage, but all animals are accounted for. Our hearts and prayers are with our communities that seem to have received the brunt of this morning’s storm and to our first responders and emergency personnel who are working overtime to restore services and keep us safe.”

County Emergency Management Agency officials added that anyone needing special assistance from the American Red Cross in the aftermath should call the EMA at 662-469-8918 or contact the Red Cross directly for assistance at 901-726-1690.