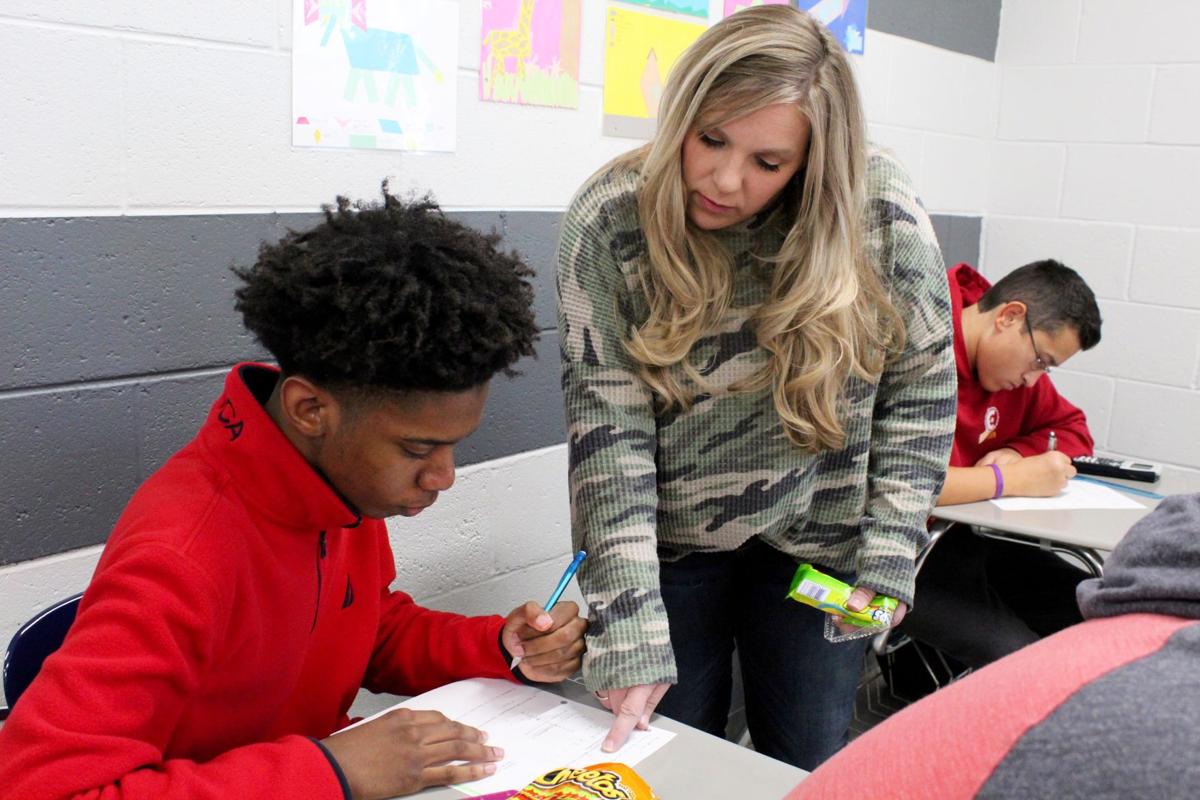 DeSoto Central High School geometry instructor Tori Farmer helps a student with a problem during a recent class. Farmer’s grant from the Foundation for Excellence in Education will help “incorporate math manipulatives in order to broaden students’ visual and spatial sense.” 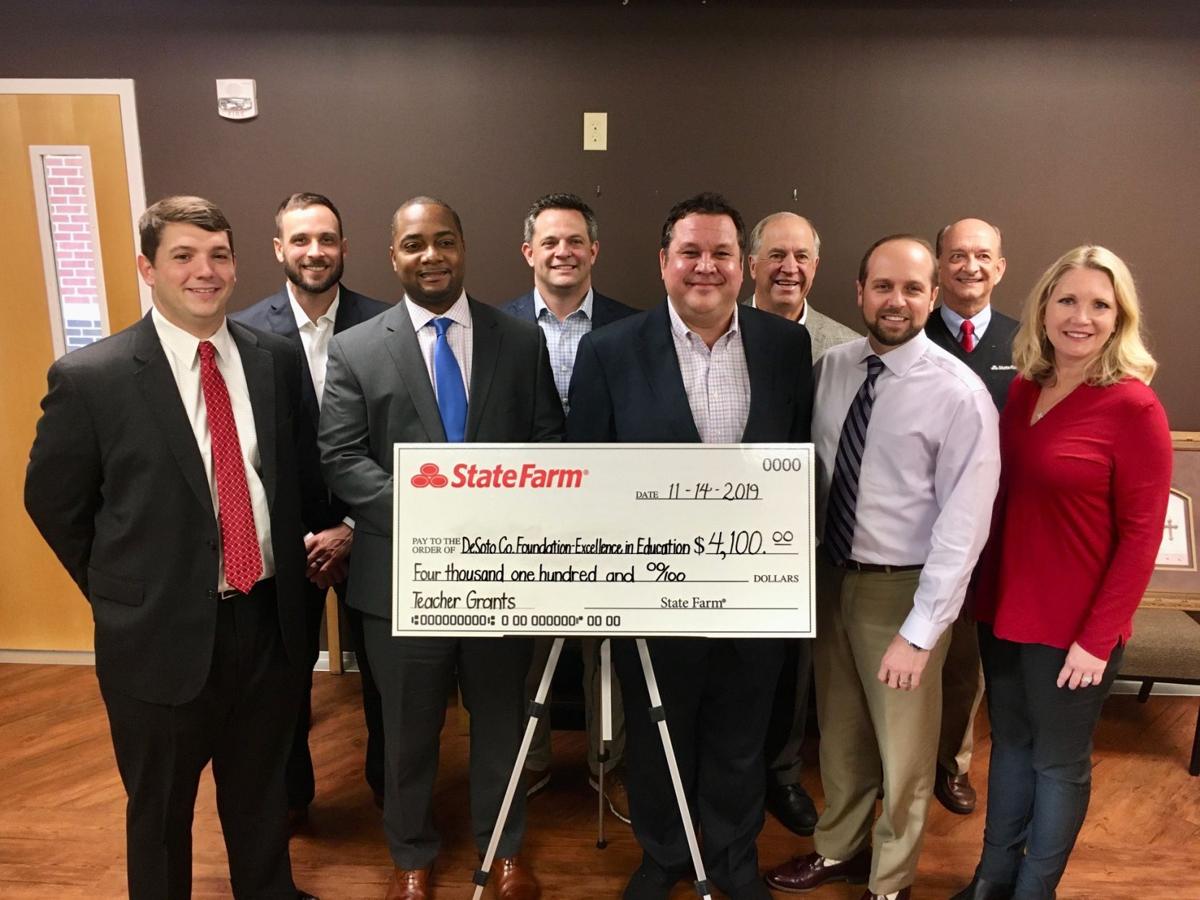 DeSoto Central High School geometry instructor Tori Farmer helps a student with a problem during a recent class. Farmer’s grant from the Foundation for Excellence in Education will help “incorporate math manipulatives in order to broaden students’ visual and spatial sense.”

DeSoto County teachers late last week gathered together, knowing they were going to get something they had asked for, something that they feel will help their classrooms achieve more.

The gathered instructors also knew exactly they were receiving and likely were as excited as a child about to find out what Santa had brought them for Christmas.

The gifts were checks, money they had applied for from the DeSoto County Economic Development Council’s (EDC) Foundation for Excellence in Education, as part of the Foundation’s annual Classroom Teacher Grant Program.

In all, this year’s grants to instructors in DeSoto County Schools, Northpoint Christian School, Sacred Heart School, the DeSoto County Alternative Center, and the DeSoto County Juvenile Detention Center, all totaled $51,251.61 for 117 grants. The number was a slight drop from last year, when about $58,000 in grant awards were given to 113 teachers.

“Geometry is the one mathematical course where students are able to use the algebra that they have already mastered for real world application,” Farmer said. “Even though spatial reasoning is something most students master early in life, some still struggle without concrete application.”

There is an application process that teachers must submit, describing how they plan to use the funds if successful. The Foundation then reviews the applications and makes its awards, based on the funds available.

“We are all very appreciative that the Foundation is able to continuously get the community involved in supporting the education in DeSoto County schools,” Farmer noted. “So many of us have bigger and better ideas to help ignite the learning process in our classrooms, but the funding is not always available. I always promote this grant, because it is one that is fair for all teachers.”

Business concerns in DeSoto County provide the majority of the funding through their donations to the Foundation, a non-profit corporation under the EDC that receives the private funds solely for educational purposes. It has been in existence since 1989 and was initially organized by DeSoto County Schools.

The Foundation also holds a Salute to Industry golf tournament each year to support teacher grants, which this year raised about $5,800 for teacher grants. It offers the Ben Flanagan Scholarship Fund to a senior or seniors with a winning essay. It also created the Jonathan Kelly Memorial Golf Scholarship in 2018, awarded for the first time this year to a deserving young person with a desire to learn more about golf. Erin Donovan of DeSoto Central was the scholarship’s first recipient.

ADVANCED PLACEMENT-DUAL ENROLLMENT: In other education news, how schools in DeSoto County weigh dual enrollment classes versus advanced placement, or AP, courses for a student’s class ranking may change for next year.

Some seniors in DCS high schools recently brought their concerns that more dual enrollment courses are counted similarly to advanced placement classes, when the AP classes are typically more rigorous or difficult when compared with dual enrollment classes.

They met with district administrators Jennifer Weeks and Keith Williams to discuss the issue and it was determined a committee would be formed to look at it and fashion a new policy.

“Students who take primarily dual enrollment courses at the local community college are getting the same 1.1 weight as students who are taking Advanced Placement courses,” said DeSoto Central senior Annie Phan. “There’s a clear difference in rigor with these classes with AP classes being significantly harder.”

Phan said a class ranking may sometimes determine whether they are more likely to be accepted at an Ivy League school, a Stanford or Duke, based on their class ranking.

She said the cross section of students from a number of county high schools was surprised by the success of their arguments.

“We received an unexpected amount of support from them,” said Phan. “They agreed with most of the points we had. They said that a committee will be formed for this.”

Phan also learned it is not a simple fix, however. There is four-step process with a committee formed that will include AP course teachers, dual enrollment teachers, and students. There will be a public opinion process where people can weigh in their opinion and then it will go before the school board (sometime in the spring).

BOARD MEETS YOUTH LEADERSHIP COUNCIL: At the Nov. 7 DCS school board meeting, the 43 members of the Superintendent’s Youth Leadership Council were introduced.

The council members, made up of juniors and seniors from all eight DCS high schools, are selected for a two-year term to learn leadership skills and much more, according to Jeff Shands, who helps oversee the program.

“They commit in their junior year to two years,” said Shands. “They will study government for one year and we culminate with a spring trip to Washington, D.C. They then will study business and entrepreneurship and that then ends up with a trip to New York City.”

Shands pointed out the council is involved in other activities around the school district.

“They do a lot,” Shands said. “They are activists, they represent a cross-section of our schools and they are the best and the brightest.”

At the same meeting on Nov. 7, board members agreed to advertise for bids for a re-roofing project at Hernando Middle School, and a similar project at Olive Branch High School.

Bob Bakken is Managing Editor for the DeSoto Times-Tribune.