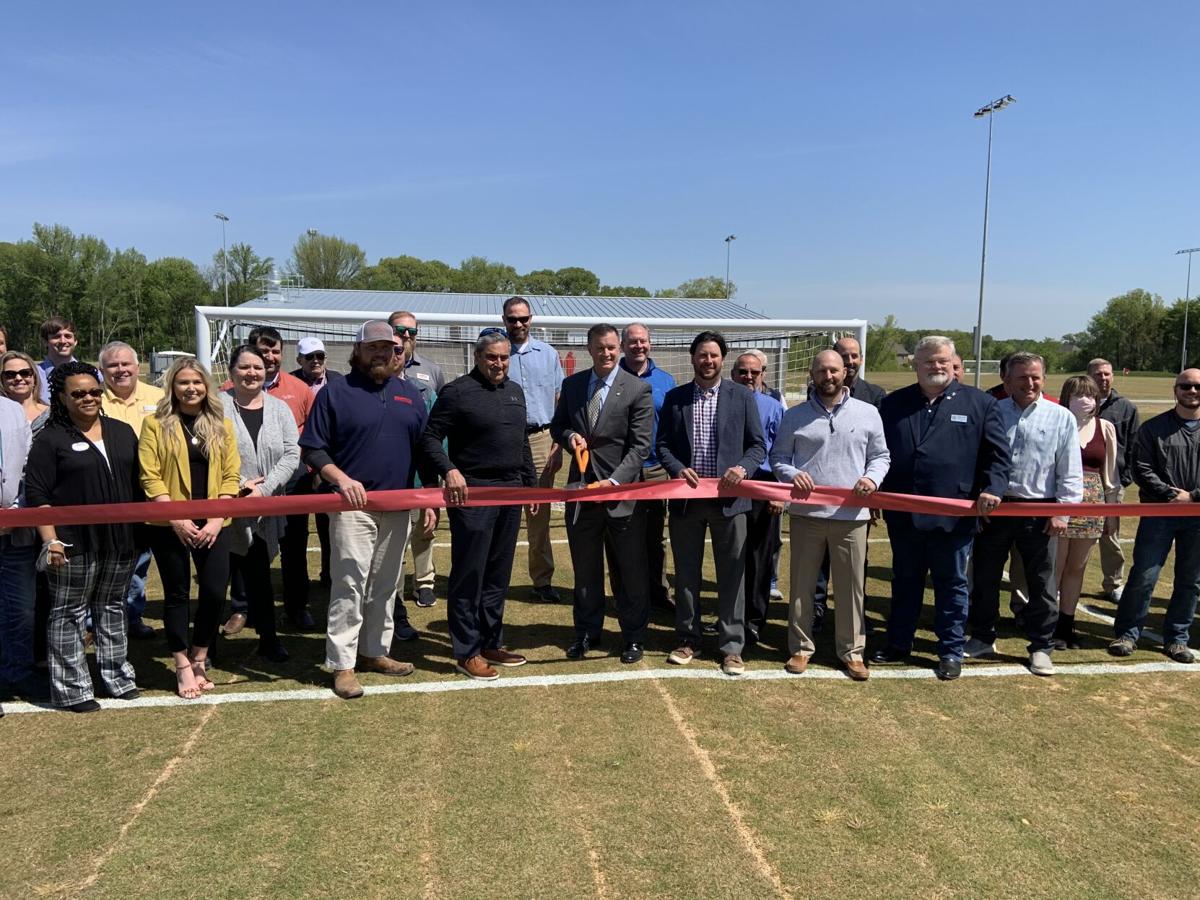 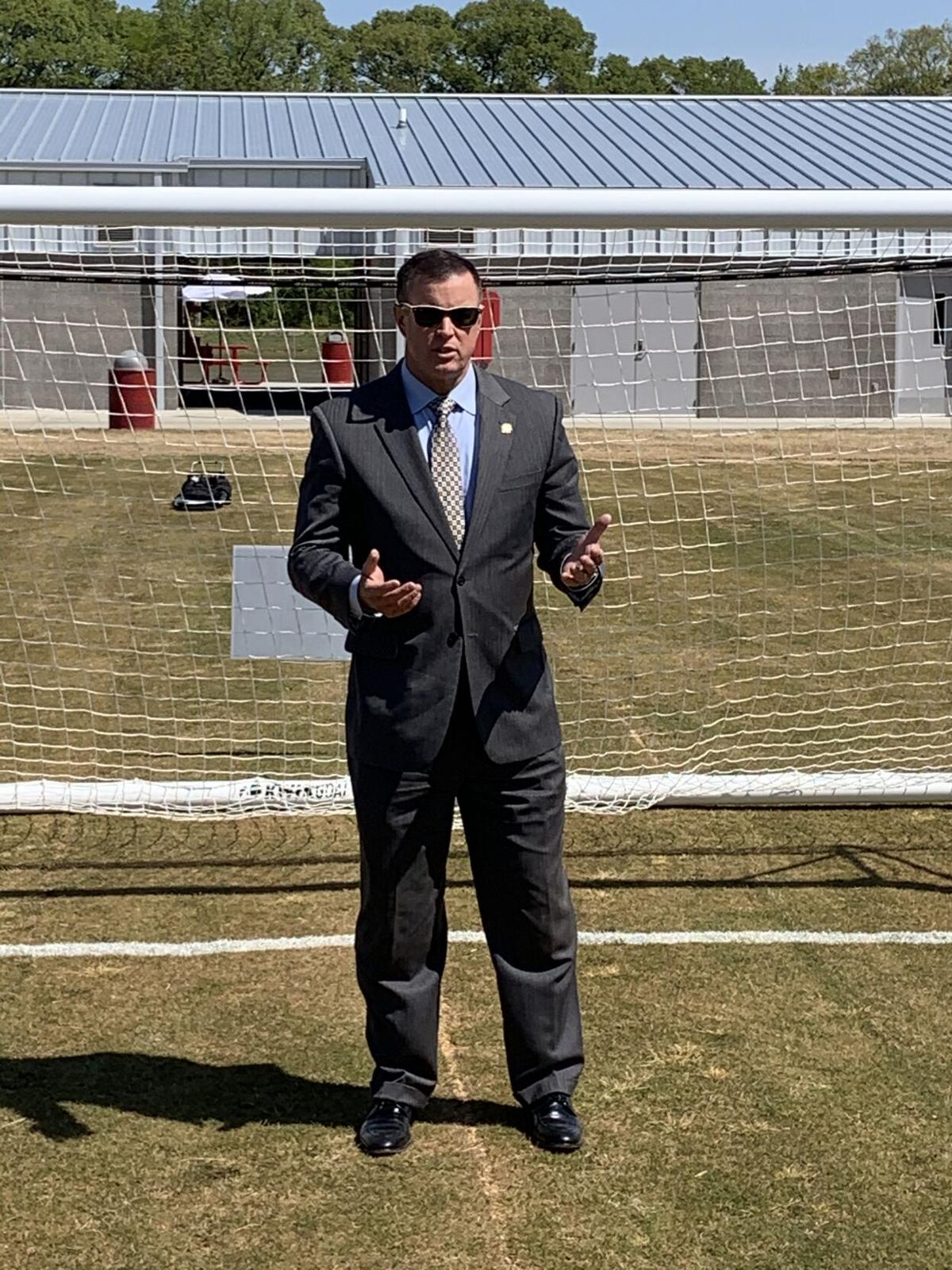 Southaven Mayor Darren Musselwhite praises the city's new soccer complex at Snowden Grove Park and the many new opportunities youth will now have to enjoy sports.

Southaven Mayor Darren Musselwhite praises the city's new soccer complex at Snowden Grove Park and the many new opportunities youth will now have to enjoy sports.

Southaven Mayor Darren Musselwhite has hired a lot of employees in his eight years as mayor. But the easiest hire ever by far was when he picked Levi Nunnally to be the city’s first ever soccer director.

Soccer was an area that Southaven was looking to expand opportunities for its youth and Musselwhite said Nunnally checked all of the boxes.

Nunnally grew up playing soccer in the DeSoto County Soccer Association, was a star player at Itawamba Community College and Tennessee Wesleyan University, as well as the Memphis Futbol Club, and enjoyed a successful coaching career at different levels in Georgia at Young Harris College and then head coach at Northwest Mississippi Community College, where he led the women’s program

“There were no negative boxes,” Musselwhite said. “The meeting probably lasted 20 minutes. It was that easy. I said no need to talk to anybody else. He is the perfect guy.”

Nunnally will get to see the city’s investment in soccer fields pay off this weekend when Southaven hosts 36 teams as part of the Springfest Cup tournament at the new $5 million soccer complex at Snowden Grove Park.

"It's exciting," Nunnally said. "Soccer has really afforded me everything in my life. And now this. I couldn't be more happy. Having the city back soccer is unbelievable."

Officials cut the ribbon on the seven-field facility Thursday as part of it latest efforts to make Southaven a destination for youth sports.

“This is such a big deal,” Musselwhite said. “It is going to affect a lot of lives. It is going to make our city a more attractive place to live and improve the quality of life. And it is going to be a tourism draw.”

Southaven has already invested millions of dollars building up its baseball fields which have attracted major tournaments and brought tourism dollars  into the city. Musselwhite said soccer was the last missing component at Snowden Grove Park.

“Obviously we have mastered baseball in Southaven,” Musselwhite said. “We are the model of competitive baseball and youth baseball in  the southeastern part of the United States. So Snowden Grove has been a tremendous success. We want to expand our programs to reach more kids, give more opportunities. Soccer is a big piece of that that we’ve been waiting on.”

Musselwhite said although they don’t expect Snowden Grove Park to supplant Mike Rose Soccer Complex in Memphis as the premiere soccer venue, the new fields will give teams another option in DeSoto County where they can play soccer.

“It is just an outstanding thing that we are going to be able to do this and bring soccer to Southaven,” Musselwhite said. “This whole operation will be second to none.”

Musselwhite added that the improvements at the park were made possible by the tourism tax. He reminded residents that sports tournaments bring money to the city that make other quality of life improvements possible such as hiring more police and firemen and better roads, regardless of whether residents have children or grandchildren who play soccer.

“When a dollar is made in the city of Southaven, that goes into the general fund, which benefits every citizen,” Musselwhite said.

Parks and Recreation Director Wes Brown said he is excited to see teams play on the new fields.

“I think we have the best facility by far,” Brown said.

Brown said although the city is getting a late start on the soccer season, the fields will host an adult league, camps and clinics, and they already have tournaments lined up for the fall.

“In the fall we really expect to see 100 team tournaments,” Brown said. “We’re basically going to have the  Dizzy Dean baseball equivalent for soccer next year in May.”

Nunnally said he expects the teams playing in the tournament will have a good experience in Southaven at the new complex.

"It's a nice intimate complex," Nunnally said. "The fields drain well. It's compact. You can get from one end of the complex to the other in no time. The fields are close, which is good for referees and good for directors and field marshals. It's a really nice complex that was well thought out and designed.