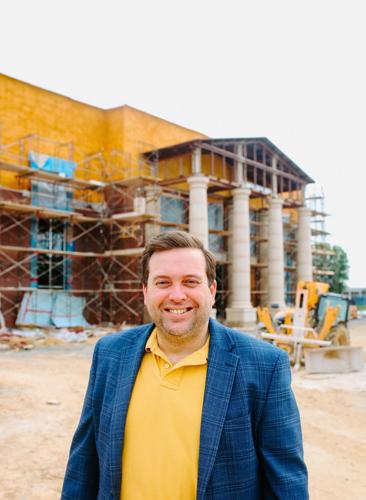 Dr. Kerry Goff recently moved to Mississippi from Texas to take over the new Performing Arts Center in Senatobia. 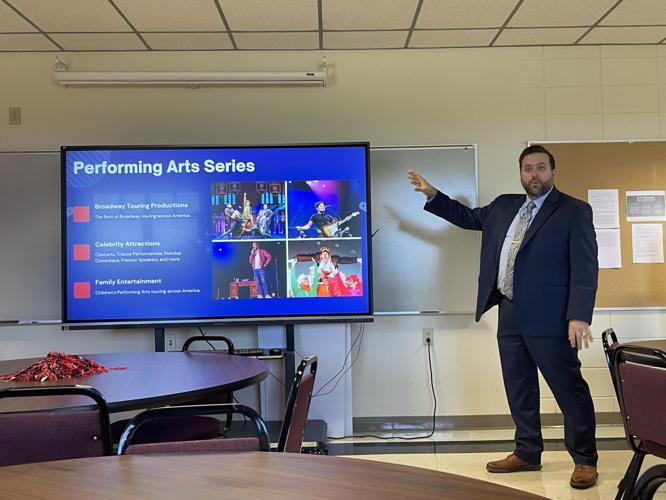 Goff explained the plans for the upcoming theatre season

Dr. Kerry Goff recently moved to Mississippi from Texas to take over the new Performing Arts Center in Senatobia.

Goff explained the plans for the upcoming theatre season

Northwest Mississippi Community College DeSoto Center hosted a “Meet the Director” event to introduce their new Director for the Performing Arts Center at the Senatobia campus that is currently under construction.

Kerry Goff recently moved to Mississippi from Texas with his wife and two children where he had an impressive theatrical career.

“I fell in love with theatre a long, long time ago,” Goff said. “I liked the technical aspect of it first. Then, I found that I liked the performance aspect. I started getting involved with a community theatre after high school. When I decided I wanted to direct, I went to college at McMurray University, and I returned to my hometown to run that theatre company.”

After running his hometown theatre for a while, Goff learned that one of this previous teachers at McMurray was retiring.

“One of my professors ended up retiring and I applied to revitalize that program because it had kind of reached a downturn,” Goff said. “There were about eighteen toral students. Our goal was to bolster those numbers and bring back some programming that was lost. In about two years, we jumped from about 18 total students to about 45.”

When COVID-19 hit, Goff found ways to get creative with his theatre department.

“Then, when COVID hit and we were all horribly bored and stuck at home, I was on a walk and our university president approached me about outdoor theatre,” Goff said. “The idea was to spread the actors out and the audience and perform. We were performing in July of 2020 outdoors in our quad. I think we were the only university theatre company to perform that early with no COVID cases.”

Goff said his interest for the NWCC job came from the idea of being able to build a completely new program.

“When I saw this job opening, I was very intrigued because I had been a part of rebuilding programs, but never a part of starting one from scratch,” Goff said. “We’re happy to be here. God has opened so many doors and it’s actually been as smooth as I could possibly ask it to be.”

“We have this big auditorium with a beautiful lobby, a VIP room, an outdoor courtyard and a cluster of offices for the Performing Arts Center staff,” Goff said. “We also have instructional space and loads of it. There’s classrooms, a recording studio, faculty offices for the band and choir departments, ensemble rooms, practice rooms and a big giant band hall that will seat somewhere around 200 band members. On the outside there will be a 100 yard practice venue.”

The new addition to Senatobia is expected to benefit surrounding areas like DeSoto County, as well.

“We want to be a high quality performing arts enterprise that is the driving force for arts and culture in the community,” Goff said. “And, not just Senatobia, but our entire 11 county region.”

Goff said the first official theatre season will begin sometime in the spring of 2023 when construction on the new venue is finished.

“We have different sections of the whole season,” Goff said. “A season traditionally runs during fall, spring and summer, but we’re going to start our first season in the spring because construction will wrap in the fall.”

A season for the Performing Arts Center will include several different aspects including Broadway shows, popular performers and family friendly productions.

“We’re going to have a performing arts series, and that will potentially include broadway touring shows,” Goff said. “We want to be a landing spot for the best of Broadway that’s touring the country. Celebrity attractions will include concerts, nationally recognized performers, tribute performances, stand up comedians, premiere speakers and more. Family entertainment will also be a large part of the season as well including children’s shows.”

Goff said he plans on also producing theatre in the summer to allow local performers the opportunity to get on stage.

“We’re also going to be a venue that produces theatre in the summer, only,” Goff said. “We want to be a place where you can be involved no matter what. We’re going to produce a summer musical in the summers and we want community and regional participation. We will do theatre camps for youth and give them the option to be on stage.”

The new venue will also be able to stream popular movies and Goff said he expects to host several movie nights throughout the season.

“We’re going to have the capability to stream movies,” Goff said. “We’re excited about being able to stream your favorite movies throughout the year.”

Goff said the Performing Arts Center will be stocked with top of the line Steinway pianos.

“We are a Steinway school,” Goff said. “The whole venue has Steinway pianos. Steinway schools demonstrate the full commitment to excellence by providing students and faculty with the very best instrument possible. We’re one of about 10 community colleges in the country that is an all Steinway school.”

Goff expects to launch social media accounts for the Performing Arts Center on July 11th. Season tickets will begin to go on sale on September 5. There are two variations of season tickets.

“Fixed season tickets will include 10 performances,” Goff said. “There will be different price points for each level. Flex season tickets for those that might not want 10 events. It’s essentially a pick 5.”