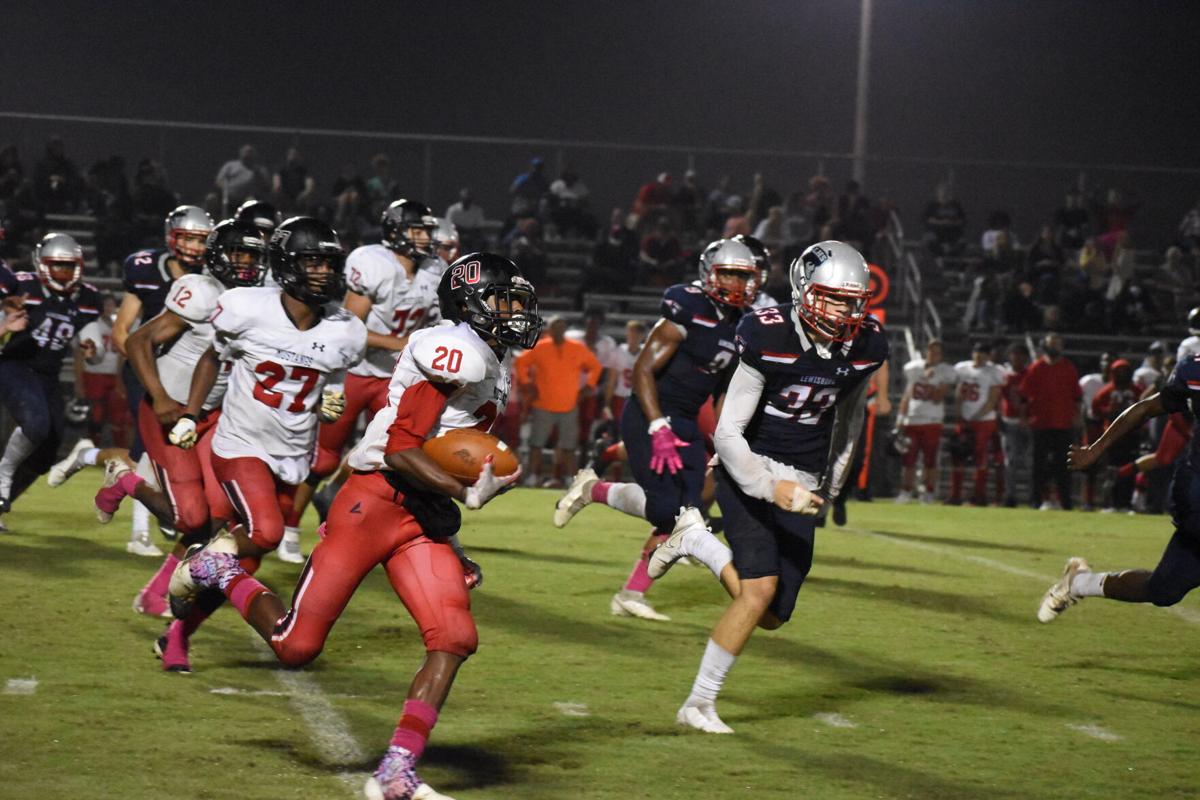 Mustangs’ senior running back Keon McChristian carries the ball past Lewisburg defenders. McChristian rushed for 52 yards in the game. 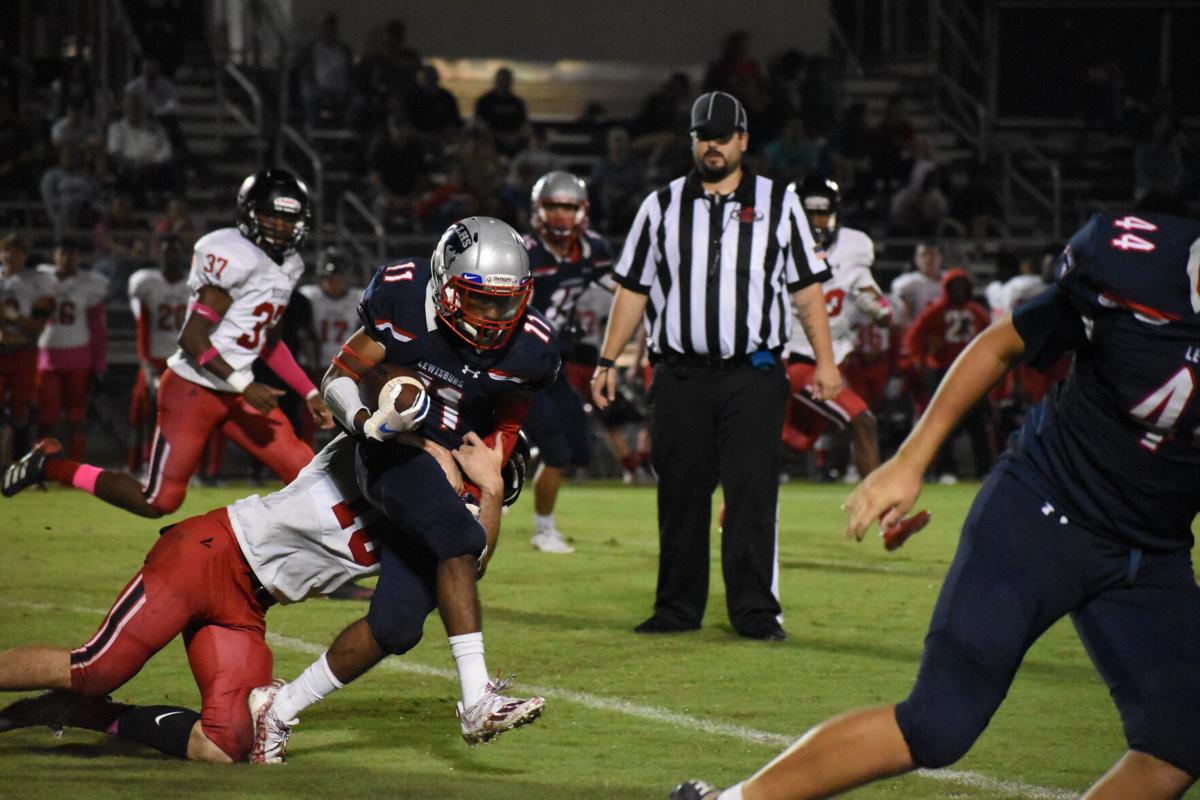 Mustangs’ senior running back Keon McChristian carries the ball past Lewisburg defenders. McChristian rushed for 52 yards in the game.

After losing their last three games, the Center Hill Mustangs ran their way to victory against Lewisburg in Friday night’s rivalry matchup, 27-17, to improve to 2-4, and 1-1 in district play.

Staying true to their name, the Mustangs spent the night running across the field, picking up 370 rushing yards and zero through the air. Senior fullback Amari Dawkins and senior quarterback Marq Holmes were the primary threats for the Patriots’ defense, with 18 and 19 carries.

“I’m just proud of our kids and proud of how hard they played,” Mustangs’ Head Coach Alan Peacock said. “We played a great first half.”

Holmes scored the first points of the night on a 33-yard scramble to put the score at 7-0 with 7:16 left in the first quarter. The Mustangs went for an onside kick but couldn’t recover it, and gave the ball to Lewisburg near the 50-yard line.

The Patriots couldn’t make anything of the good field position and went three and out, but senior Zach Dennie punted into a near perfect spot to force the Mustangs to start their drive from the 1-yard line.

“I think we had moments that we decided to fight and push and try to be better,” Patriots’ Head Coach Dustin Hectorne said, “and we also had moments where we kind of felt sorry for ourselves to be honest.”

The Mustangs trampled over the Patriots’ defense to pick up first downs again and again until the quarter ended with Center Hill on the opposite side of the field in Lewisburg’s red zone.

The second quarter started with another touchdown from Holmes. He carried the ball the last 6 yards with 11:52 left in the half to complete the 99-yard drive and push the score to 13-0 after a missed PAT.

Lewisburg was halted again on their next drive and had to send Dennie back out to punt.

After the return, junior running back Jamarius Jones picked up the Mustangs’ third touchdown of the night with a 45-yard rushing play. His run started near one sideline, went to the opposite one, then back, all the while dodging tackles, before making it into the end zone. Jones’ touchdown put the score at 20-0.

The Patriots quickly moved the ball downfield with a series of passes and made it into Center Hill’s red zone for the first time in the game, but the Mustangs’ defense made big stops and was able to hold Lewisburg to a 25-yard field goal by Dennie to close the half at 20-3.

Center Hill’s horsepower tapered down in the second half. Peacock said. The Mustangs couldn’t find the same gaps as they did earlier, and also had back-to-back fumbles that could have been catastrophic had they not been able to recover them.

“We did not play to our expectations in the second half,” Coach Peacock said. “We know if we do what we’re supposed to do and not turn the ball over, we’ve got a chance in all of our games.”

Lewisburg was able to contain Center Hill and score the only touchdown of the third quarter with an 11-yard carry by senior running back Myles Smith. Senior tight end Cole McKinney ran in the two-point conversion to put the score at 20-11 with 6:30 left in quarter.

The fourth quarter didn’t see any action until the final three minutes on the clock. After punting back and forth and then slowly making their way down the field and eating up most of the clock, the Mustangs found the end zone for the final time. Dawkins ran 11 yards for the Mustangs’ fourth touchdown of the night to make it 27-11.

Even with a 16-point deficit and the clock running out, the Patriots still had fight left in them. With less than a minute left, the Mustangs fumbled and Lewisburg scooped it up. One play later, sophomore quarterback Gunner Gilmore found sophomore wide receiver Easton Fesmire with a 33-yard touchdown pass. The Patriots went for the two-point conversion, but couldn’t get it and moved the score to 27-17.

In the final seconds of the game, Lewisburg tried to recover the ball on an onside kick but it went straight into Mustang hands instead to end the game.

Lewisburg is 1-4 and 0-2 in district play after Friday’s loss. They travel to Hernando for their next game, Oct. 8. Center Hill’s next game is at home against DeSoto Central, Oct. 8.