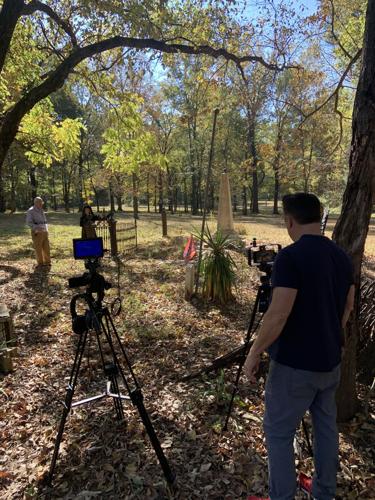 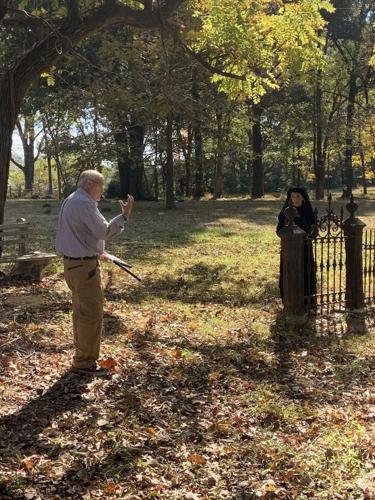 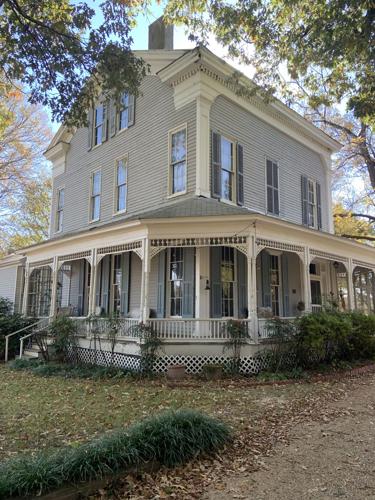 Filming was done at the historic 1849 Robertson-Yates plantation house at Mussacuna Creek in Hernando. 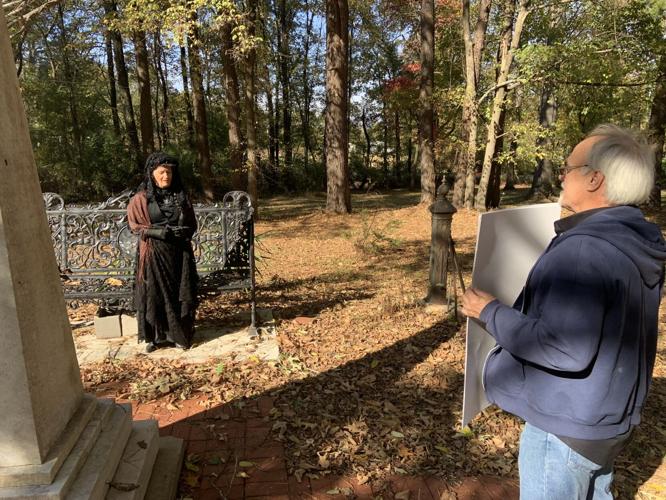 Mrs. Moses White reads over her lines. The Civil War widow shared her story of how the Yankees killed her son and burned her home and crops in retaliation for the killing of a Union officer by Confederate guerillas, despite pleas that they were pro-Union.

Filming was done at the historic 1849 Robertson-Yates plantation house at Mussacuna Creek in Hernando.

Mrs. Moses White reads over her lines. The Civil War widow shared her story of how the Yankees killed her son and burned her home and crops in retaliation for the killing of a Union officer by Confederate guerillas, despite pleas that they were pro-Union.

Visitors to the DeSoto County Museum will soon get to see and hear stories from real-life DeSoto Countians as they recount their experiences during the Civil War, World War II, and even one about a local “killer.”

“It’s a series of vignettes that will portray real voices from history in DeSoto County,” Long said.

Long, who researched each story and wrote the script, said the stories include a tale about a Confederate widow, an escaped slave who fought for the Union, a letter from the battlefield written by a Confederate soldier to his wife, and a story of a farm boy from Walls who who served in World War II and was with the forces that liberated the Auschwitz concentration camp.

“We’ve taken actual, real-life people and brought their stories to life for visitors to see and hear,” Long said. “Today’s generation of museum visitors is very visual. They like interactive exhibits. So we are stepping up and delivering on that. The museum is always trying to upgrade and improve our exhibits.”

Long said the stories are very gripping. The one about Mrs. Moses White opens with her standing in front of a pile of ashes from her home, which was burned by Union troops in retaliation for Confederate guerrillas killing a Union officer. Union troops killed her son, William, as she watched because they suspected him of being a Confederate, despite her pleas that he was innocent.

“The family was actually pro-Union,” Long said. “They didn’t believe her and ended up murdering him anyway. General Sherman gave the order to kill every male in the area over the age of 15. They ran him through with a sword and shot him, then burned the house and crops. It was just part of the horrors of war.”

Long said local actor David Gross from Northpoint Christian School, portrays Private James Gaddy of Company C, 42nd Mississippi Infantry in one video, and reads from an actual letter he sent to his wife where he recounts marching to reinforce General Robert E. Lee, and a close call with a piece of shrapnel that missed him by one foot.

“He was in battles in Virginia and was at Gettysburg, and wrote these beautiful letters home to his wife,” Long said.

Another story is told through the eyes of an African-American former slave. George Guy was born a slave in 1845 and tells of how he and his brother, Baldy, ran away to freedom at a contraband camp near Corinth and joined up with Company B, 55th United States Colored Infantry. They fought against Confederate General Nathan Bedford Forest at Brice’s Crossroads in North Mississippi. After the war, he and his wife settled in DeSoto County on his own land in Lewisburg where they raised five children and advocated for civil rights.

“This gives visitors another perspective of the war, an African-American voice,” Long said. “To tell history, you have to have all sides, and we do that with these vignettes.”

The last story also deals with the horrors of war and is set at Auschwitz Concentration Camp in April 1945. The scene opens with two young, emaciated Jewish boys dressed in ragged prison stripes clinging to the legs of a young American soldier. The soldier reaches into his pocket and gives each a chocolate bar. That soldier was Morris Casey from Walls, who served in the 78th Infantry Lightning Division, 3rd Battalion of the 310th United States. His unit liberated the infamous concentration camp and he describes the sickening sight of seeing thousands of bodies of men, women, and children stacked like cordwood who were killed by the Nazis.

“He was just a farm boy from tiny Walls, Mississippi who witnessed one of the most horrific chapters in World War 2,” Long said. “He had nightmares about it for the rest of his life.”

A final story, which hasn’t been filmed yet, will be about Jerry Lee Lewis, a pumping piano player from Ferriday, Louisiana who shot like a comet to fame at Sun Records in Memphis at the birth of Rock ’n’ Roll singing his immortal hits “Great Balls of Fire” and “Whole Lotta Shakin.’”

“He has lived here in DeSoto County for more the 50 years,” Long said. “We have a nice display in our museum with one of his pianos that he used on tour and many other items that we got from him. So we will have an actor portraying Jerry Lee Lewis who will tell you why they call him ‘The Killer.’”

Long said the stories were filmed by local videographer T.J. Cates and University of Memphis cinematographer Dr. Marika Snider, and was funded by a grant from the Mississippi Humanities Council. The vignettes will be shown on big screen TVs at various points of interest in the museum that coincide with the time period being represented.

Long said they plan to debut the exhibit to coincide with the museum’s 20th anniversary in March 2023.

“We will have a big extravaganza,” Long said. “We have a lot of announcements that we will be making about projects we are working on. It’s part of our revamp. We put a new roof on the building. We did the sidewalk. We’re adding a new train exhibit. We have a lot happening.”