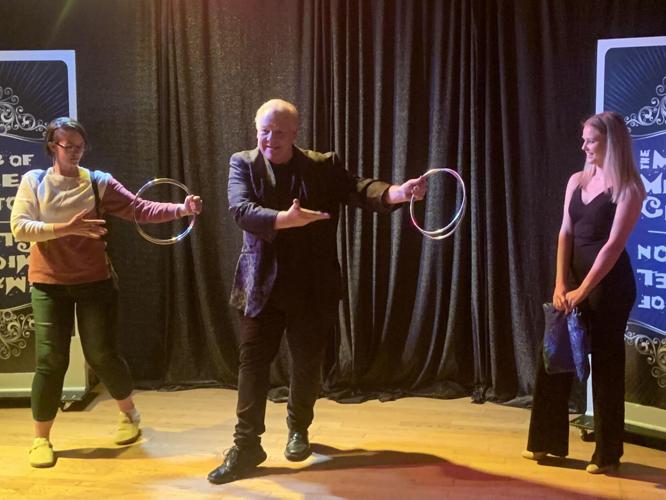 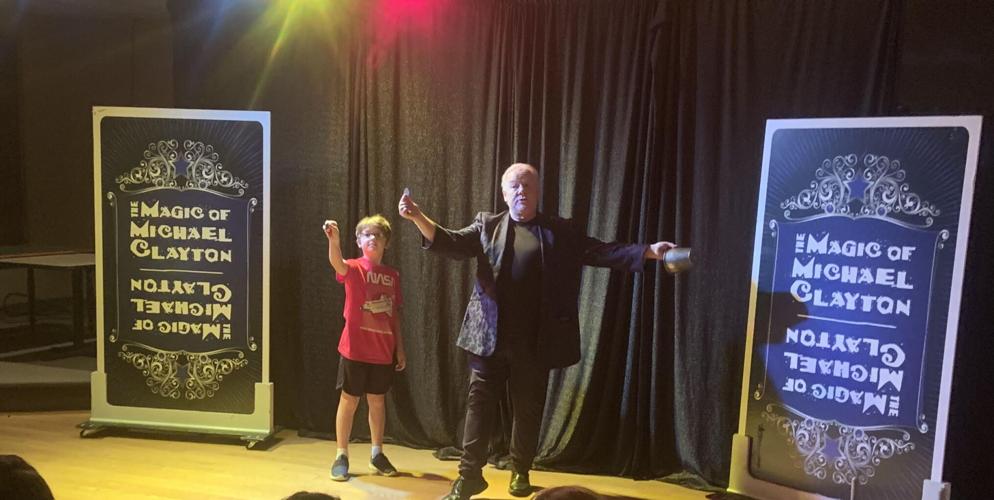 Clayton pulls money out of thin air to the delight of his young assistant Elliot. 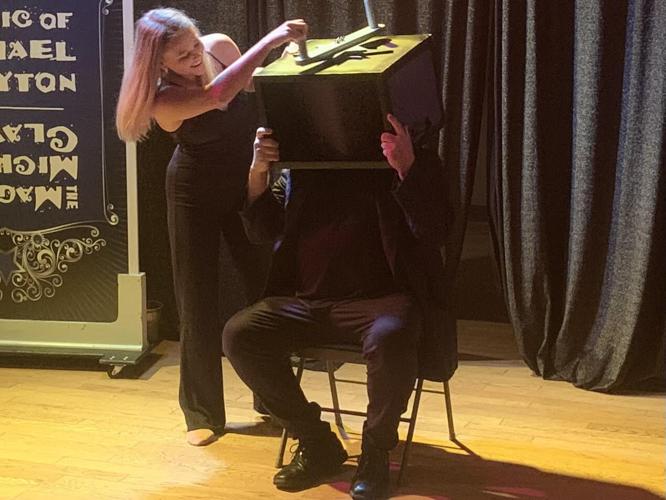 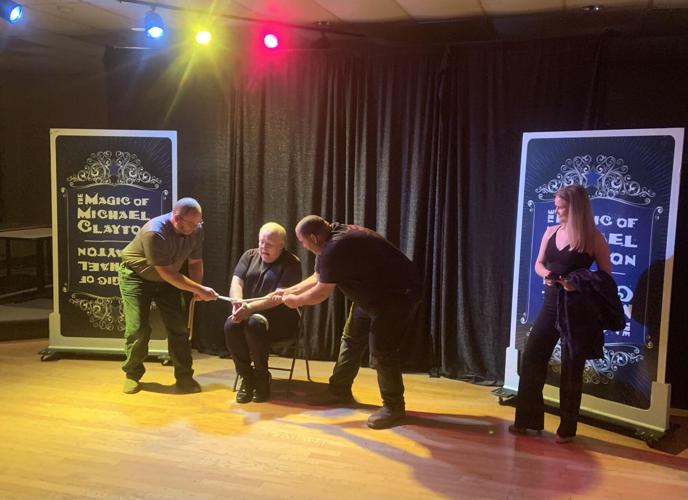 Richard and John tighten the knots as Clayton attempts to perform the Houdini rope escape trick. 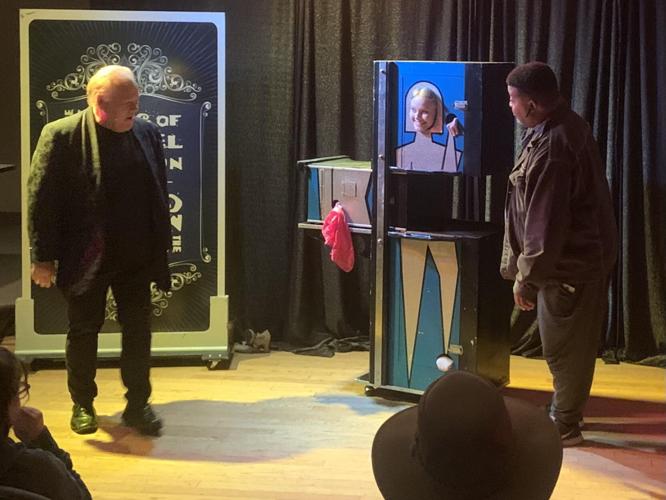 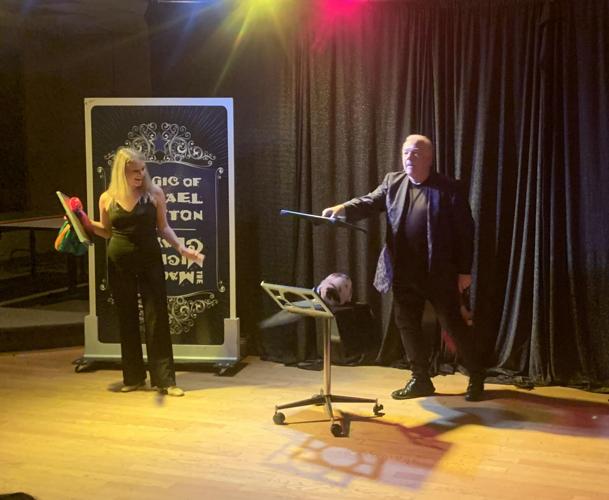 Clayton made "Edgar" a 6 year-old Lionhead rabbit appear out of nowhere. 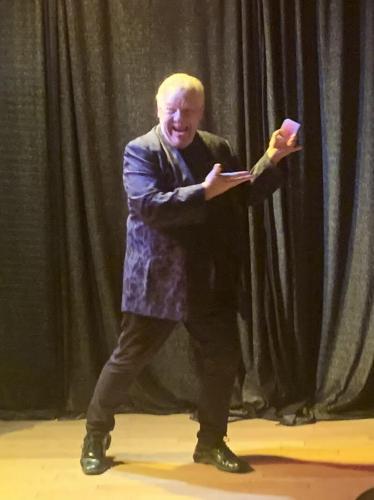 Clayton not only picked the right card, but turned it from red to blue. 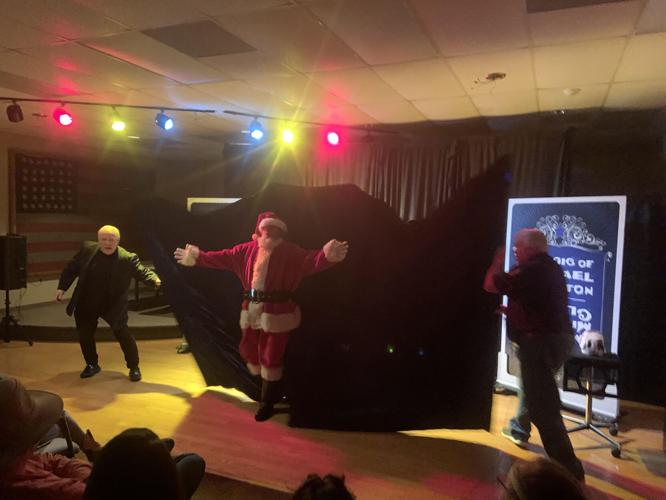 Clayton made Makayla disappear and magically Santa appear with the help of Ward 4 Alderman Dave Young. 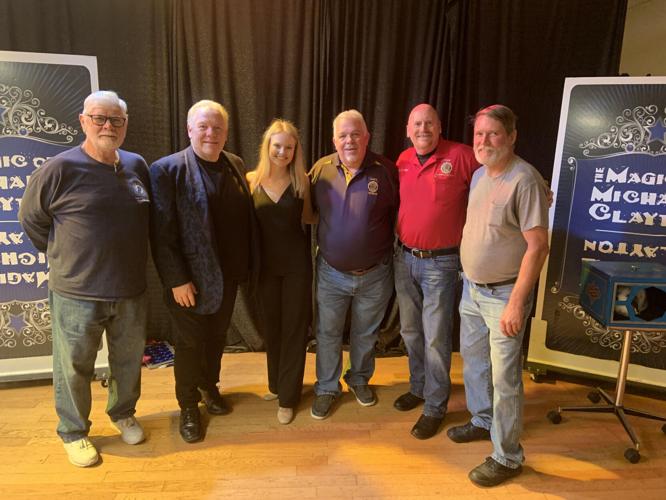 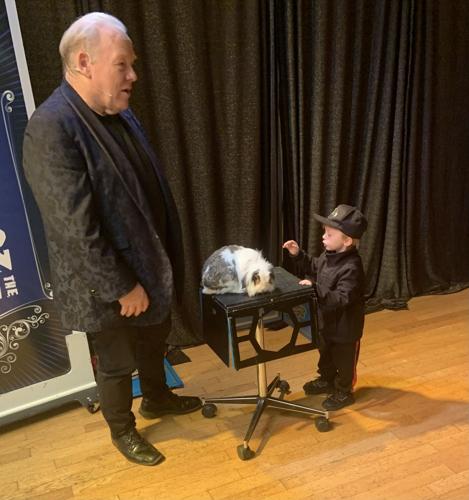 A young fan asks Clayton how he made Edgar the Lionhead rabbit appear.

Clayton pulls money out of thin air to the delight of his young assistant Elliot.

Richard and John tighten the knots as Clayton attempts to perform the Houdini rope escape trick.

Clayton made "Edgar" a 6 year-old Lionhead rabbit appear out of nowhere.

Clayton not only picked the right card, but turned it from red to blue.

Clayton made Makayla disappear and magically Santa appear with the help of Ward 4 Alderman Dave Young.

A young fan asks Clayton how he made Edgar the Lionhead rabbit appear.

Michael Clayton became enchanted with magic tricks from an early age. His grandfather would reach up and pull a coin from thin air and then reach behind his ear and make another coin appear.

Today, he delights in seeing the faces on kids in the audience when he brings them on stage and pulls coins from the air and from their nose.

Elliot, a youngster from Southaven who assisted with the trick, had no idea he had so much money on him.

“Open your mouth and let me see if you have any silver fillings,” Clayton said. “No? What do you do, brush your teeth?”

Clayton then proceeded to fill the container with Eisenhower silver dollars seemingly pulled from thin air.

Clayton, a Memphis-based professional magician, brought his magic show to the Hugh Dancy American Legion Post #134 in Horn Lake on Saturday and had the crowd of children and parents saying “abracadabra” and “hocus locus” and clapping as he magically linked metal rings together, successfully guessed which card a member of the audience picked, escaped Houdini-style after having his hands tied in knots, and magically divided his assistant Makayla into three parts.

“There is an unlimited number of tricks you can learn,” Clayton said. “That’s the great thing about magic. There is such a variety of entertainment and it appeals to everybody. And best of all, the audience gets to participate.”

Clayton said he became interested in magic after a magician came and performed at his school. His parents bought him a magic kit and he soon learned the “pick a card trick.” But it was the 1970s TV show “The Magician” that really inspired him to want to become a professional magician. In the show, Bill Bixby plays a stage illusionist who solves crimes.

“He lived in an airplane and he drove a white 1973 Corvette Stingray and he got all the girls,” Clayton said. “I thought, man, that’s a cool job. I want that.”

Clayton won his school talent show at age 13, and by the time he graduated high school, he had appeared on “Magicland,” a Memphis magic show broadcast on WMC-TV and hosted by Dick Williams. He later won the annual Magic Competition for his mastery of the classic Linking Rings trick.

“I’ve been doing magic here in Memphis and Southaven since I graduated in 1982,” Clayton said. “When I moved to Memphis, there was a group of magicians who used to meet at The Fun Shop. They would all get together and do tricks and they would show me tricks and I would learn from them. It was great.”

His favorite trick to perform is the Zig Zag Girl illusion where he divides his assistant into thirds.The trick was developed in 1965 and first performed on TV in England by magician Robert Harbin. Harbin published a book called “The Magic of Robert Harbin” in 1970 where he revealed the secret behind the trick. The book was limited to only 500 copies  and the owners were granted permission to perform the trick in their acts. Dick Williams performed the act for the first time in America in the early 1970s.

“I saw him do that and I got to talk to him and learned how to do that illusion,” Clayton said. “A few years ago we did a memorial show for Dick Williams when he was still alive and I got to do that trick for him. Jerry Lawler came up on stage and got to help me do that trick.”

Clayton dazzled Evangelina, a young audience member, with his slight of hand card trick where he not only guessed the card she picked, but turned it from red to blue.

Clayton grabbed several other young volunteers from the audience to assist him on other magical feats. Tabitha was amazed by the linking rings trick. “That was so awesome,” she said.

“You’ll have to come back and show me how to get them apart,” Clayton joked at the conclusion of the trick.

Adults Richard and John thought their double knots would be impossible to escape from as they pulled as tightly as they could to secure him, but were no match for Clayton as he easily escaped.

And although he didn’t pull one out from a hat, Clayton made Edgar, a six year-old Lionhead rabbit magically appear to the delight of the youngsters, who were able to pet him after the show.

“How did you do that?” one boy asked.

Clayton saved the best for the end. With the help of Ward 4 Alderman Dave Young, the pair wrapped up assistant Makayla in a giant sized roll of cloth and made her disappear and Santa Claus magically appear.

He said the best way for beginners and aspiring magicians to learn magic tricks is to read books and watch videos that show you how the tricks are performed.

“When I was a kid, we went to the library,” Clayton said. “Libraries are still around. We went there and I would check out books about magic. Nowadays, there are a lot of tricks you can look up on YouTube. But books are still the best way to learn.”

The magic show drew a mix of about 40 children and parents. Young said he hopes to bring even more family entertainment to the city in the near future.

“That was great,” Young said. “I really enjoyed it. We’re trying to bring the family back in Horn Lake. And these kids will be talking about this for months. I bet the next time we do something like this it will be standing room only.”