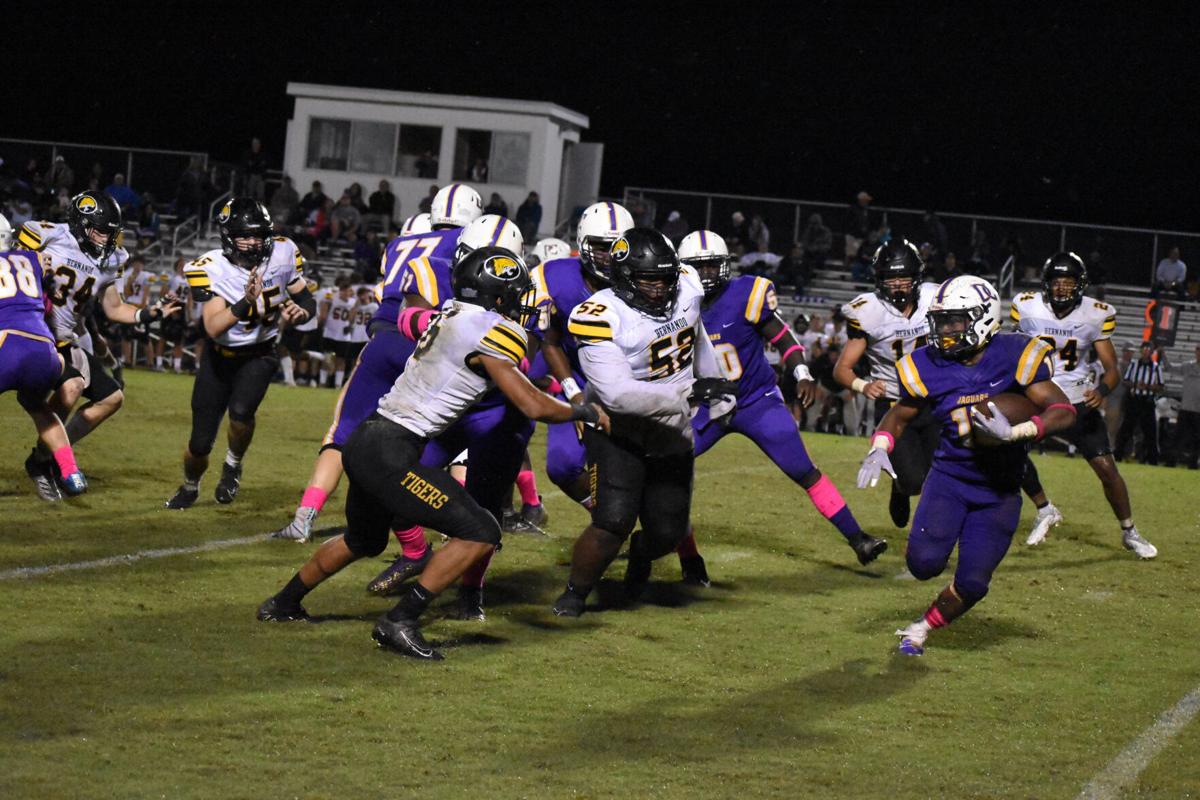 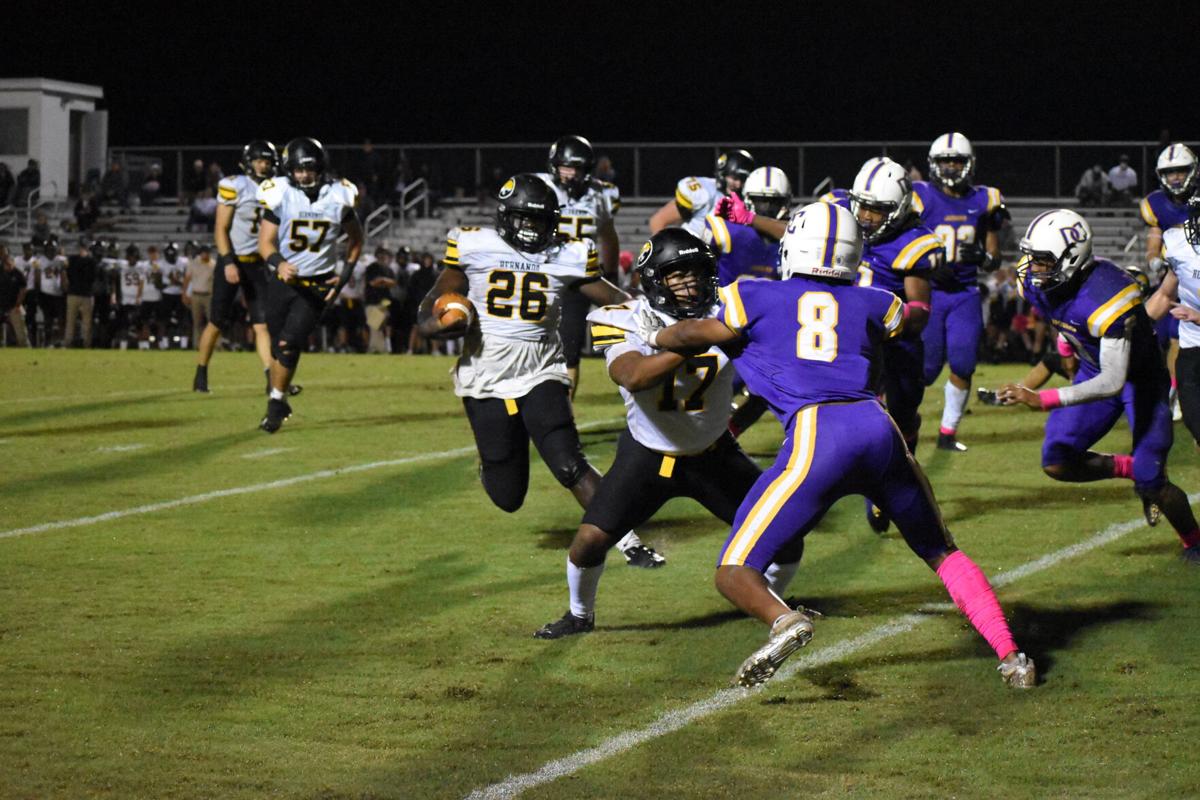 Henry Smith blocks for Curdarrius Bullock to allow him a path to the end zone. Bullock scored two touchdowns and a two-point conversion. 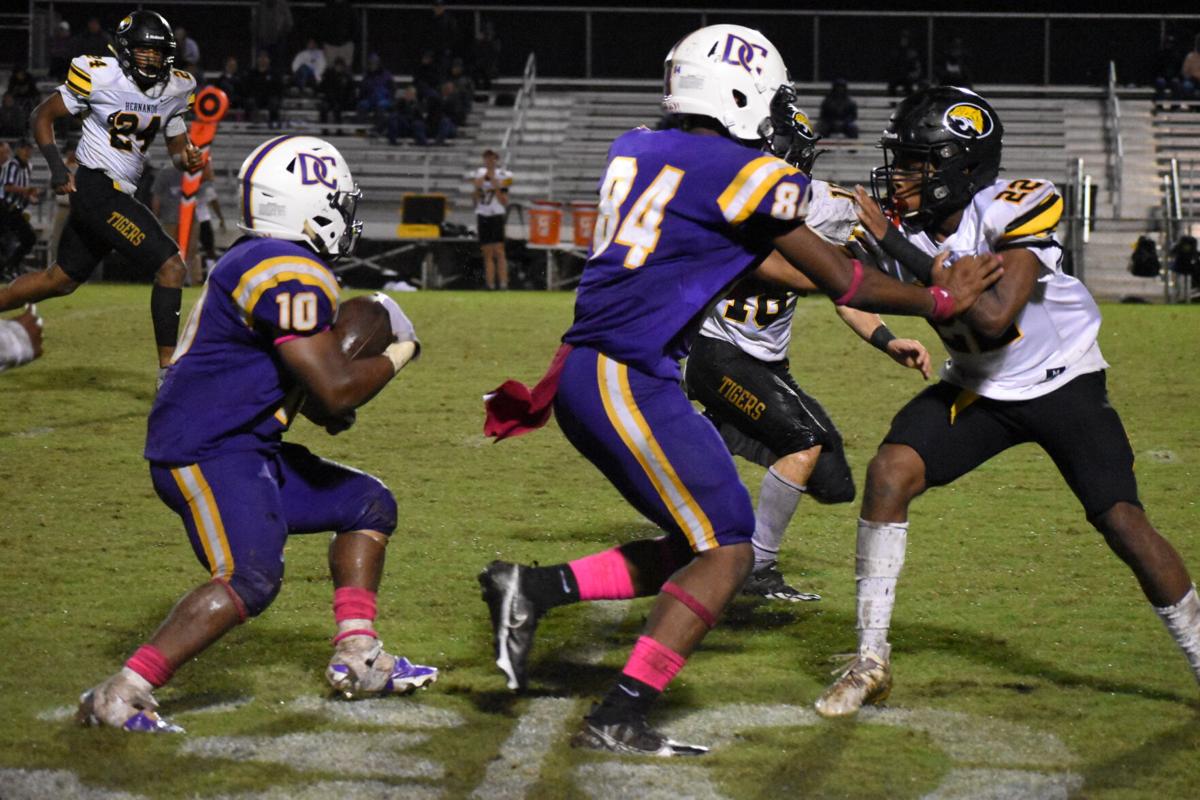 Ethan Minor blocks for Marquis Fields on one of Fields’ many carries of the night. 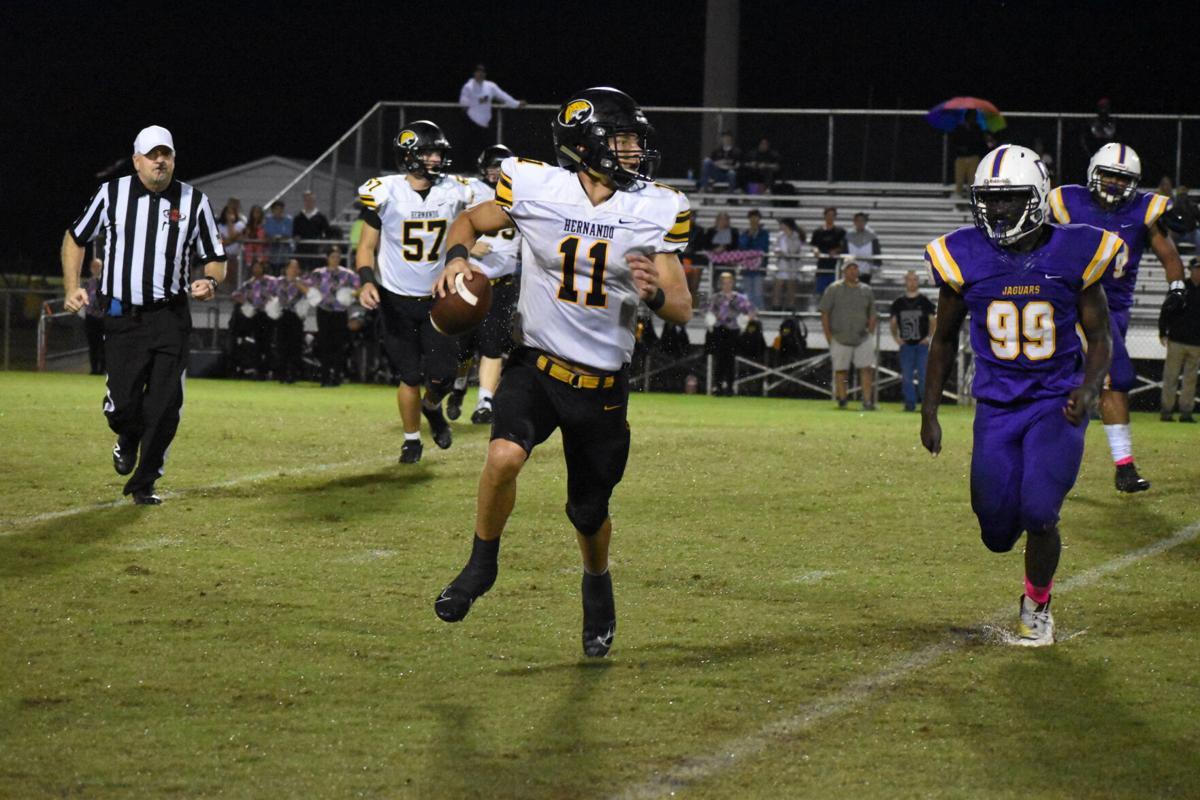 Tigers’ quarterback Zach Wilcke looks for an open receiver while getting chased by Jacob Wilson.

Henry Smith blocks for Curdarrius Bullock to allow him a path to the end zone. Bullock scored two touchdowns and a two-point conversion.

Ethan Minor blocks for Marquis Fields on one of Fields’ many carries of the night.

Tigers’ quarterback Zach Wilcke looks for an open receiver while getting chased by Jacob Wilson.

The DeSoto Central Jaguars remain undefeated in district play after coming back from two special teams setbacks at home to defeat Hernando 27-14.

The two teams battled each other as well as the elements in the matchup, dealing with wet footballs, slippery grass and strong wind.

“We came out in the first and we hit them,” Jaguars’ Head Coach Shelby Ford said.

Early into the first quarter after getting the punt from the Tigers, DeSoto Central carried out a quick drive on the ground led by Marquis Fields. The senior running back put the Jaguars in the lead with the first points of the game on a 1-yard carry to make it 7-0.

After Fields’ touchdown, DeSoto Central got the ball back shortly after the kickoff by recovering a fumble, but the Jaguars couldn’t make it back to the end zone on the drive and turned the ball over on downs at Hernando’s 1-yard line.

The Jaguars and Tigers spent the rest of the first quarter trading possession of the ball, neither team able to find any points or first downs.

The second quarter continued the trend with a punt from Hernando followed by a punt from DeSoto Central not long after. But on Hernando’s next possession, Zach Wilcke, under heavy pressure from the Jaguars’ defense, fired a pass down the sideline for a first down at DeSoto Central’s 22-yard line.

A rushing play from Curdarrius Bullock moved the Tigers into the red zone and the team made it to the 4-yard line but the Jaguars’ defense made a big stop on 4th down to get the ball back.

The Jaguars were able to put a little bit of distance between the ball and their own end zone, but couldn’t pick up the first down and went for the punt. A dropped snap however made the punt impossible, and the Tigers took possession back right where they were before their turnover.

Bullock took the ball again and pushed through the Jaguars’ defense to score Hernando’s first touchdown on a 5-yard carry to make it 7-7 with 2:57 left in the half.

The Jaguars looked to punt again one minute later at the same spot on the field when another dropped snap gave Hernando the chance to bring in a second touchdown before halftime.

Bullock repeated his last touchdown and powered 5 yards straight through the defense to put Hernando in the lead 14-7 for the last points of the half.

“Hernando got the touchdowns on the two short drives from the 5-yard line, but other than that they didn’t get it,” Ford said. “I was really proud of the defense, just staring adversity in the face and getting it done.”

In the second half, the Jaguars started with a strong drive and scored when quarterback Andrew Moore connected with Blake Holley for a touchdown. They attempted a two-point conversion but couldn’t get through the defense and trailed Hernando by one, 14-13.

The Jaguars’ defense forced the Tigers to punt on their next possession but DeSoto Central defenders blocked it and regained possession in a good field position. Unfortunately for the Jaguars, they couldn’t make anything of the drive and turned the ball over on downs shortly before the quarter came to a close.

In the final quarter, Fields rushed the ball down the field and into scoring position. From there, Moore hit Ryan Musselwhite with a touchdown pass to take the lead. The Jaguars attempted another two-point conversion but it was no good and left the score at 19-14.

DeSoto Central’s offense ran back onto the field after a short break while the Tigers went three and out. The Jaguars trusted Fields to get them back into the end zone and let him take the ball eight times before the drive finally culminated with him carrying in another touchdown.

“Offense did a great job,” Ford said. “Marquis Fields, he’s not 100 percent, but he just said, ‘I’m going to do it,’ and he set the tone in the second half with his effort. We ran the same play, just forcing our will on them, and there’s no better feeling than that.”

The Jaguars attempted a two-point conversion for the third time, but picked up the extra points this time with another rushing play by Fields to put the score at 27-14, where it would stay for the remainder of the game.

DeSoto Central travels to Batesville next Friday to take on the only other football team undefeated in district play, South Panola. DeSoto Central improved to 5-3 overall and 4-0 in district with the win against Hernando.

Hernando’s next game will be at home against Horn Lake, Oct. 22. Hernando will go in with an overall record of 2-6 and 1-3 in district play.