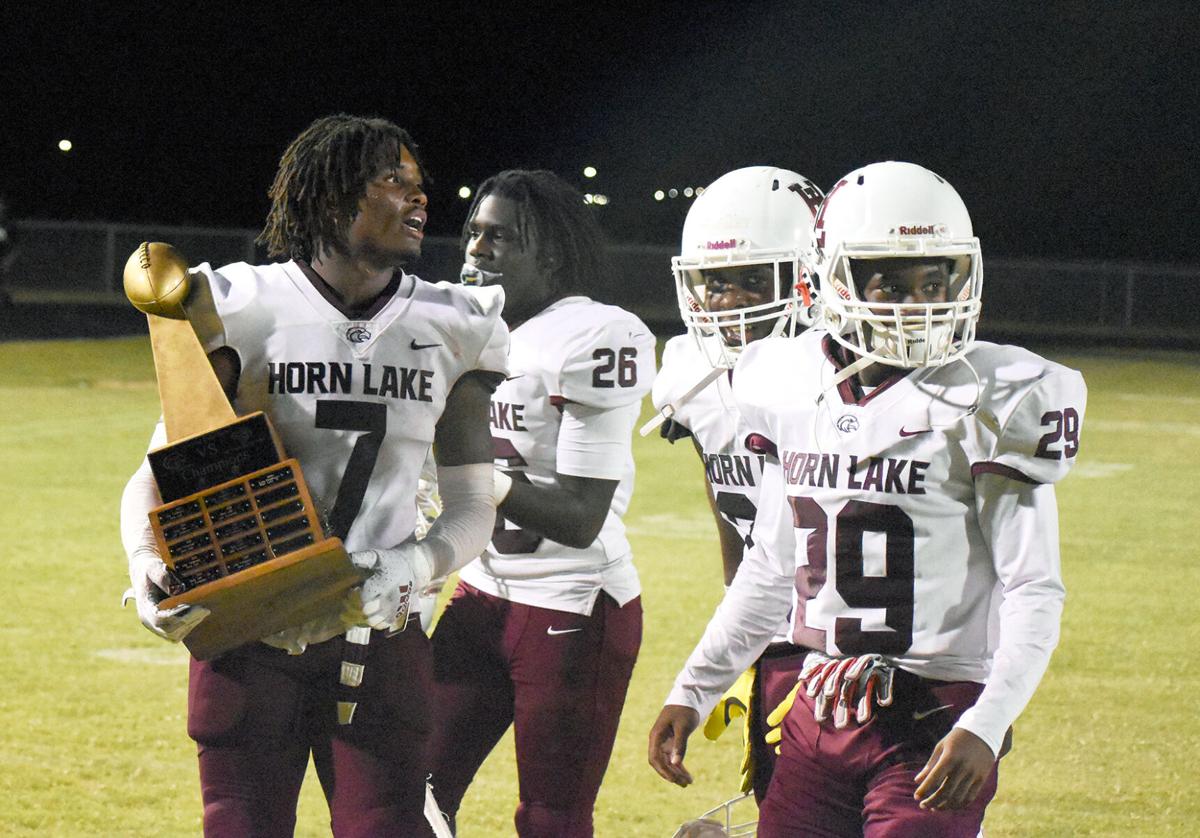 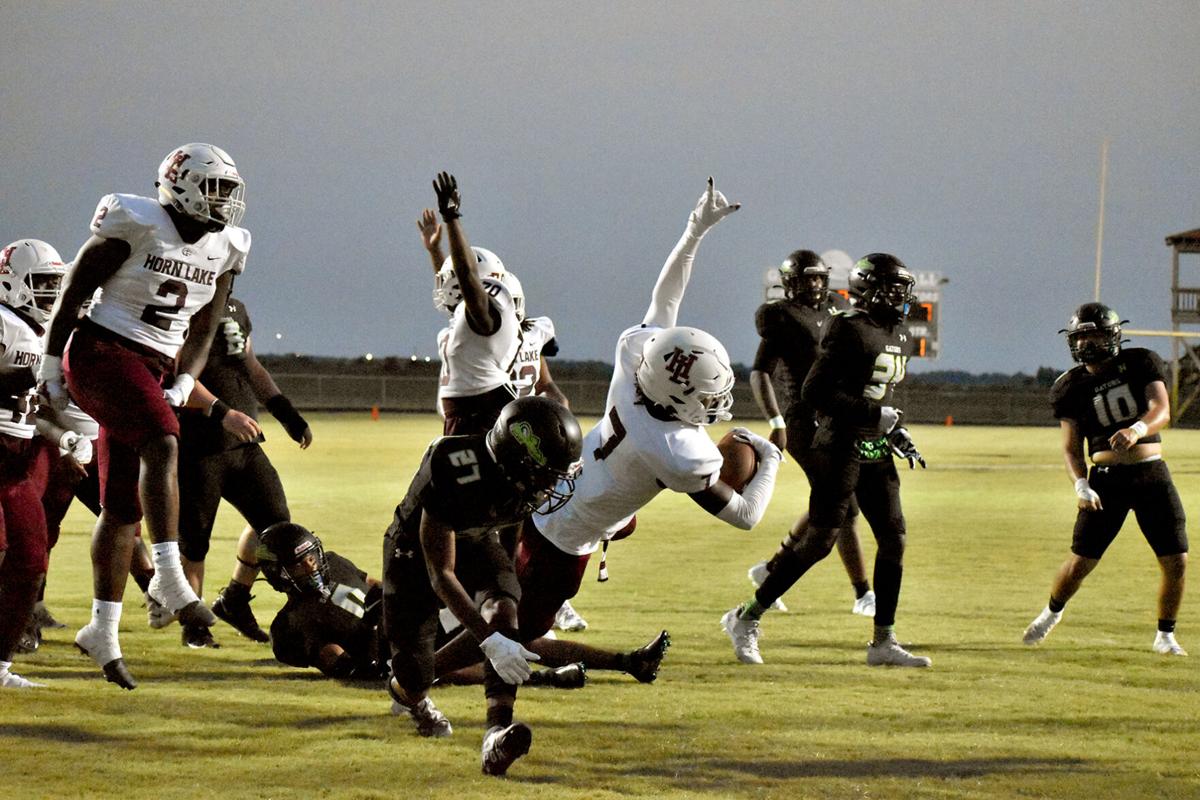 Eagles’ senior Jarnorris Hopson (7) scores Horn Lake’s first touchdown of the game in the first quarter. The Eagles only trailed Lake Cormorant by one point after Hopson’s touchdown. 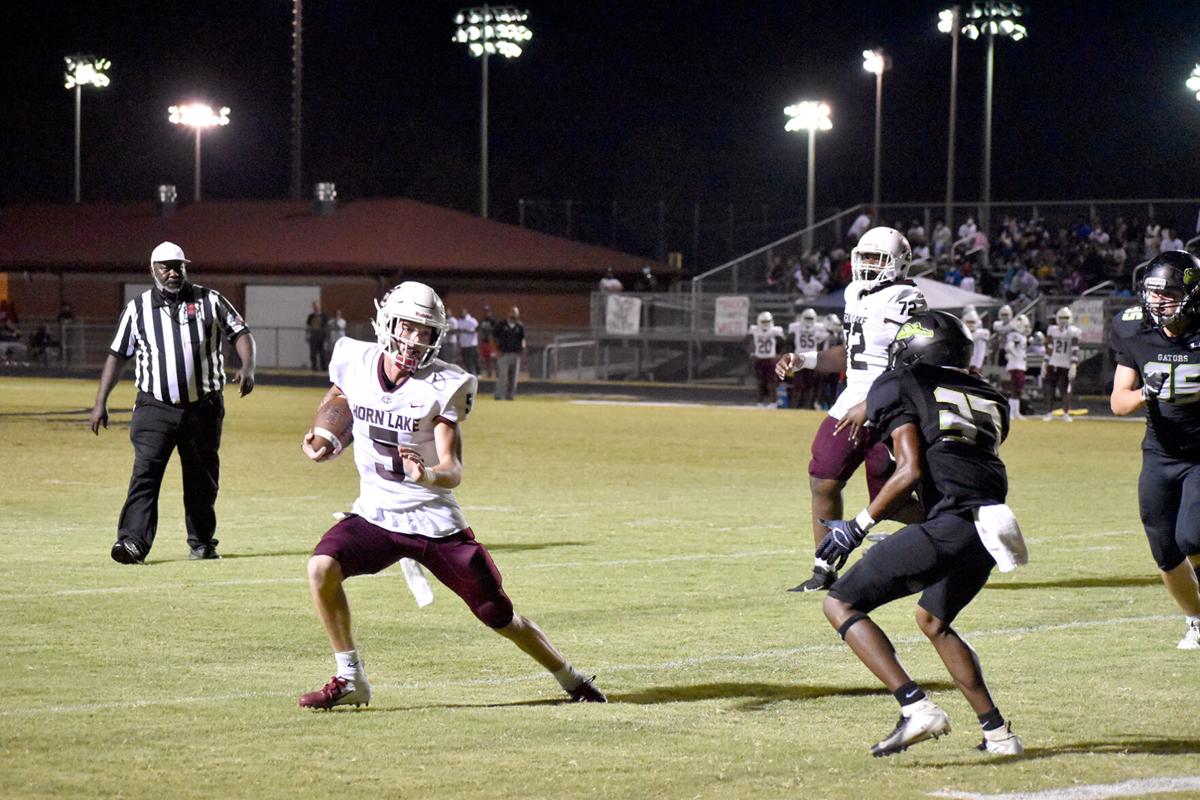 Eagles’ senior Jarnorris Hopson (7) scores Horn Lake’s first touchdown of the game in the first quarter. The Eagles only trailed Lake Cormorant by one point after Hopson’s touchdown.

Horn Lake picks up their first win of the season in The Swamp, 27-14, against rival opponent Lake Cormorant in the annual Lake Bowl matchup.

“It’s super exciting to get that win,” Eagles’ Head Coach Mitchell Harville said. “Coming in, this is a game, with the rivalry, that’s looked forward to from the time it ends one year until we get to it the next year.”

Lake Cormorant took the first possession and quickly moved it downfield with a long pass from senior quarterback Telvin Amos to senior wide receiver Jordan Martin. The offensive powerhouse looked the part and came out ready to score, just like they did in their first two games.

Immediately after, Martin takes the ball again and runs in a 9-yard touchdown to score the first points of the Lake Bowl and put the Gators up 7-0.

The Eagles answered with a touchdown of their own, ran in by their offense’s standout, senior Jarnorris Hopson. The touchdown moved the score to 7-6 after a failed PAT attempt.

Horn Lake followed it with another rushing touchdown, this time from senior LeVante’ Hodges, taking it from inside the 20-yard line to put Horn Lake in the lead, 13-7. For the first time this season, the Gators’ trailed their opponent.

The Eagles attempted to pick up an extra three points with a field goal on their next fourth down to cushion their lead, but couldn’t get it through the uprights and gave the ball back to Lake Cormorant on the 17-yard line.

Horn Lake’s defense halted Lake Cormorant on what looked like their last drive of the half and forced a punt. The Gators got one last chance to score before halftime after the Eagles fumbled and gave it back to Lake Cormorant with 47 seconds left on the clock, but couldn’t convert the short-lived possession into a touchdown.

Eagles’ senior wide receiver Erwin Reed caught a long touchdown pass to open the second half and bumped the score to 20-7, where it stayed for the rest of the quarter.

In the fourth quarter, Martin scored another touchdown for the Gators, moving the score to 20-14 and making it a one possession game with nine minutes left on the clock.

With 2:34 left in the game, Horn Lake senior Jamal Moore broke through the Gators' defense and ran 44 yards to put the score at 27-14 and give the Eagles some breathing room in the final minutes of gameplay.

In the Gators’ last opportunity to score again, the Eagle’s defensive linemen broke through and pressured Amos into throwing an interception with 57 seconds left in the game. The Eagles’ offense took the field and the quarterback knelt for the final two plays, giving Horn Lake the Lake Bowl win for the first time since their state championship season in 2018.

“I just got through telling them, ‘Great win. Let’s celebrate it. Let’s enjoy it, but we can’t let this moment of our season define the season,’” Harville said. “This can’t be the highlight of our season. We have to continue working.”

Horn Lake improved to 1-2 this season with the win. Lake Cormorant’s record moved to 2-1.

Horn Lake has a bye next week and plays their next game Sept. 24, against district opponent Lewisburg (1-2). Lake Cormorant’s next game is at Southaven High School (1-2) Sept. 17.