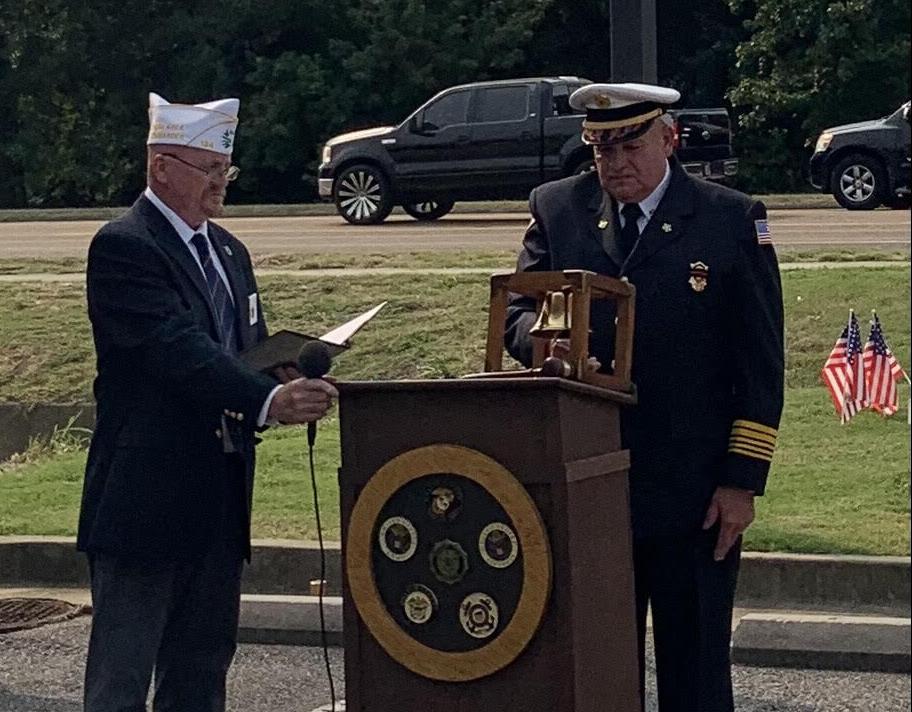 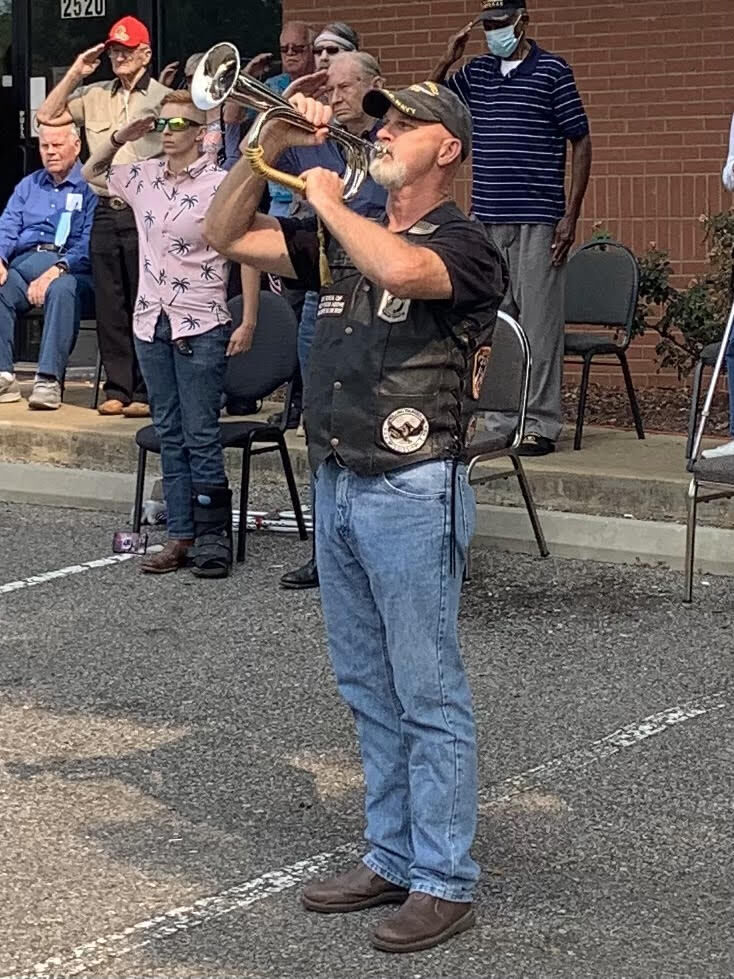 Veterans of American Legion Post 134 in Horn Lake honored the victims of 9-11 with a remembrance ceremony and the blowing of Taps. 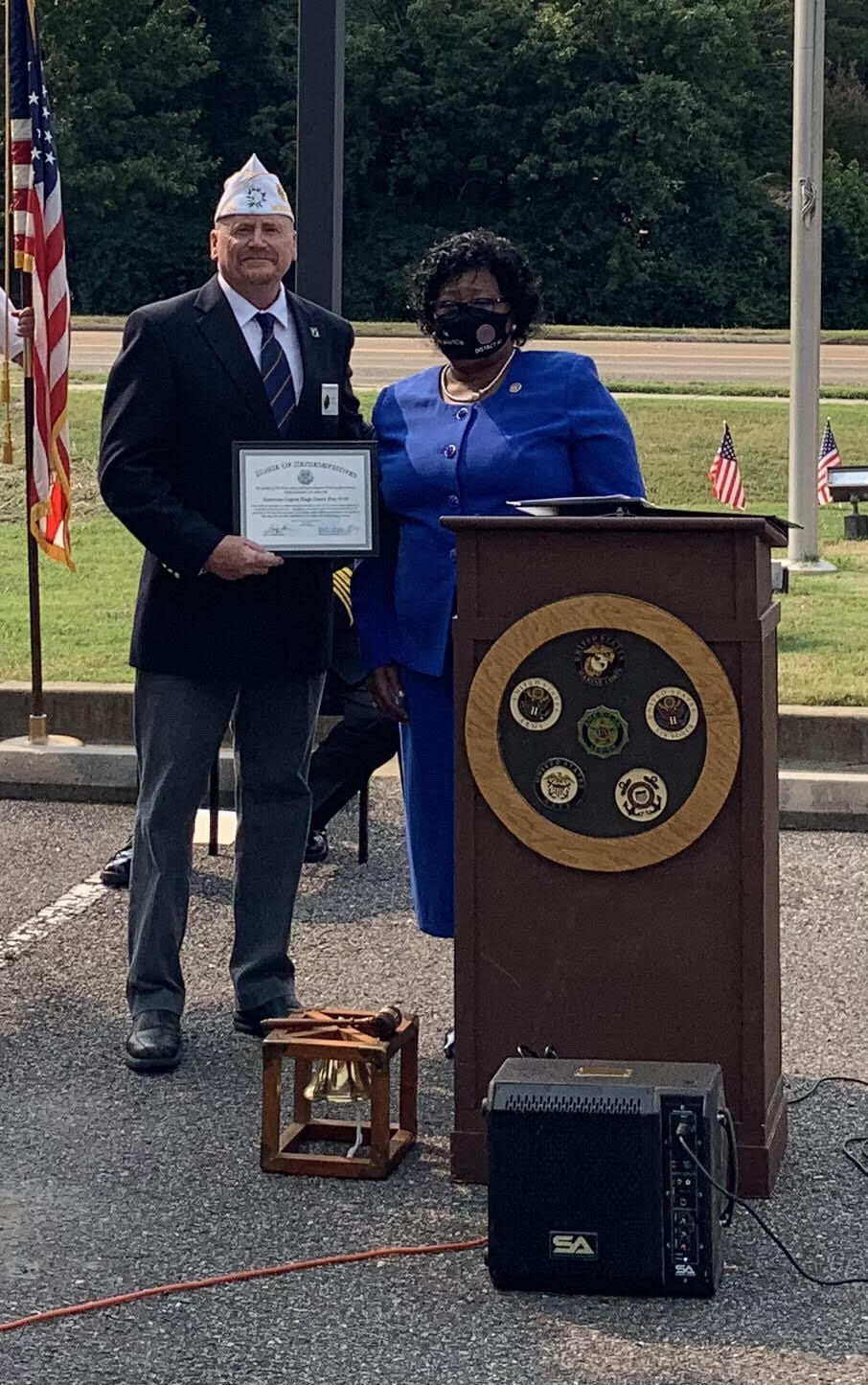 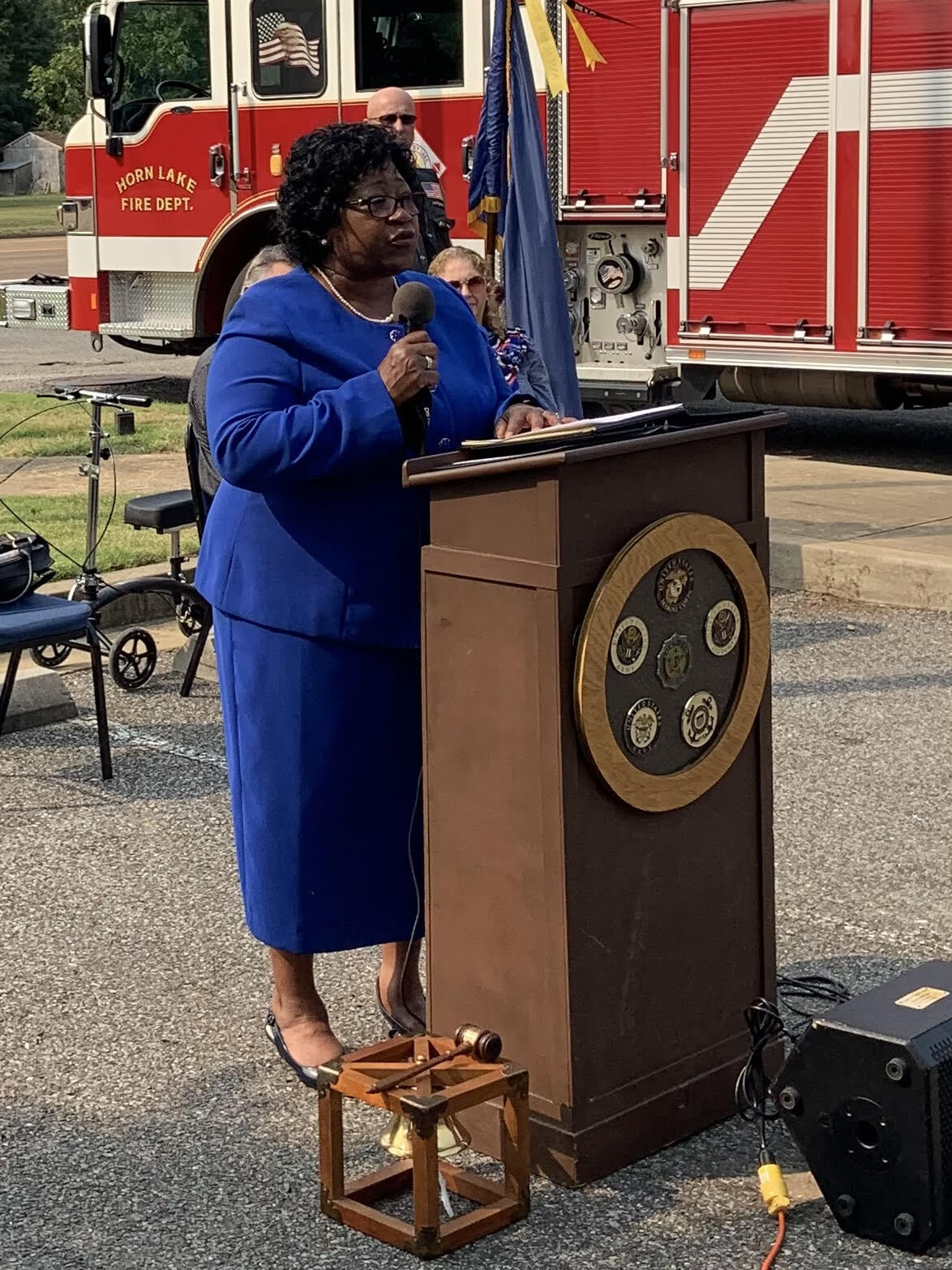 District 40 State Rep. Hester Jackson-McCray urged the public to honor first responders by getting vaccinated and wearing a mask to help stop the spread of COVID. 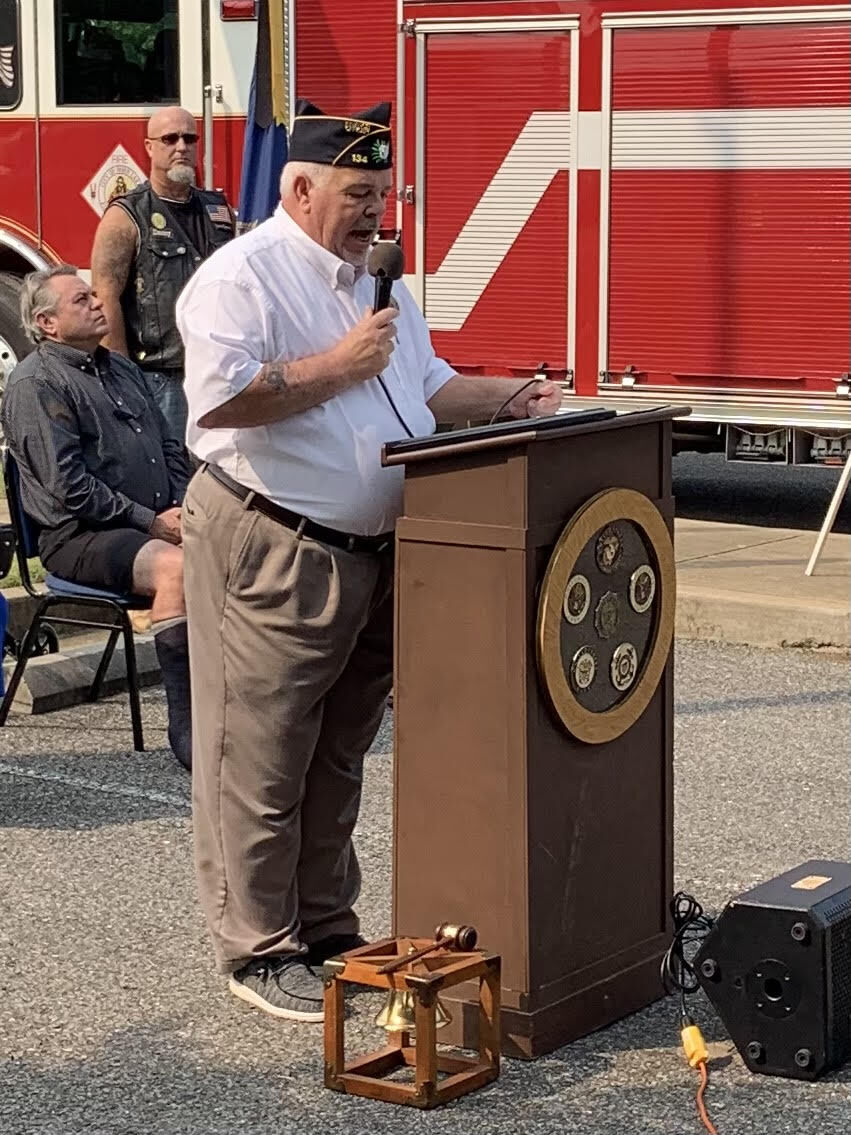 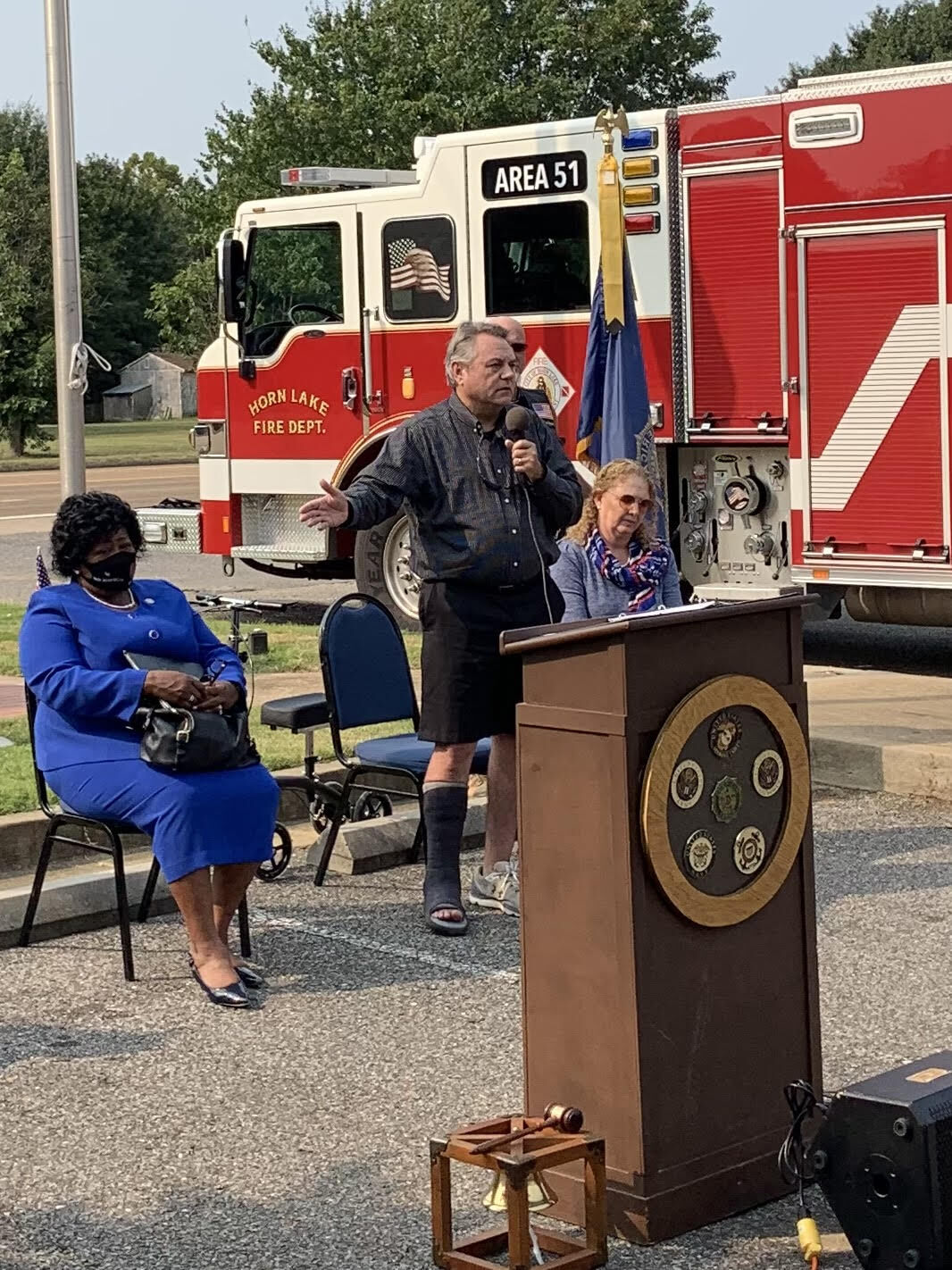 Veterans of American Legion Post 134 in Horn Lake honored the victims of 9-11 with a remembrance ceremony and the blowing of Taps.

District 40 State Rep. Hester Jackson-McCray urged the public to honor first responders by getting vaccinated and wearing a mask to help stop the spread of COVID.

David Linville had just finished up his shift at the Horn Lake Fire Department on September 11, 2001 and was out doing some work on a side job when he first heard the news on the radio that two planes had crashed into the World Trade Center in New York City.

He went straight back to the fire station and spent the rest of the morning with his fellow firefighters watching the tragic events unfold on television.

“We were kind of shocked to see what we were seeing on the TV,” Linville said. “It was something that our United States and Americans had never witnessed before as far as an attack on our own country and our own land.”

Linville, who is now fire chief in Horn Lake, spoke about 9-11 during a memorial ceremony held at the Hugh Dancy American Legion Post 134 in Horn Lake.

He paid tribute to the men and women who lost their lives that day, as well as to the bravery of the fallen firefighters who died in the line of duty saving innocent lives.

Linville said just like soldiers who are trained to put their lives on the line in the defense of their fellow countrymen, the fire fighters, police, and first responders who went inside the burning World Trade Center towers went in because they were trained to get people out.

“There were over 300 fire, police, and EMS people in New York alone who died,” Linville said. “We train to serve and protect, but to save life first. Every one of those firemen in New York went into those towers not knowing they weren’t coming out, but they knew thy had to get people out. They were trained to do that and without doubt kept going in.”

Linville said it is important to never forget 9-11, and even more important to continue to teach children today about what happened so that the memory of those who were killed will live on forever.

“There are a lot of people today who are celebrating or celebrating the memory of 9-11, but they were not even born that day,” Linville said. “We have to teach that in the schools because if it is not remembered, then it can be forgotten. We never want to forget that particular day. I pray that it will never happen in the United States again. But if we let our guard down, I’m afraid that it could happen and be worse.  But we pray that it won’t.”

Linville continued the old custom of ringing a bell or “striking the four 5’s” to honor fallen firefighters.

District 1 Mississippi State Senator Michael McClendon thanked first responders for all they do to keep the community safe, and urged citizens to insist that their government leaders provide the necessary funding they need, as well as to veterans and the Armed Forces.

“Without them, we can not have normality in our municipalities, counties, and in the nation - whether it is going to pick up a COVID person, or going to pick up somebody on life support,” McClendon said.

Horn Lake Ward 4 Alderman Dave Young, who is also a member of the American Legion, read a proclamation by Mayor Allen Latimer commemorating 9-11 as a day to never forget all of the victims who perished in the terrorist attack.

District 40 State Rep. Hester Jackson-McCray presented a similar resolution from the Mississippi House of Representatives saluting the veterans at Post 134 for their efforts to mark the solemn occasion, and to express sympathy for the lives lost and gratitude to the first responders for their commitment to the citizens of the United States.

Jackson-McCray said the COVID-19 pandemic is America’s current 9-11 and urged the public to honor first responders by getting vaccinated and wearing a mask to help stop the spread of the disease.

“Our Mississippi first responders need our help today,” Jackson-McCray said. “After more than a yearof responding to the COVID virus pandemic, they are seeing no end to the non-stop calls for emergency services that has filled our hospitals to overflowing. In Mississippi, we are not helping our first responders nor our health care providers when only 39.6 percent of us are fully vaccinated.”

Jackson-McCray said it is alarming that EMTs can’t transport car crash victims or heart attack patients to the emergency room because all of the beds in DeSoto County’s hospitals are full of COVID patients, many of which are not vaccinated.