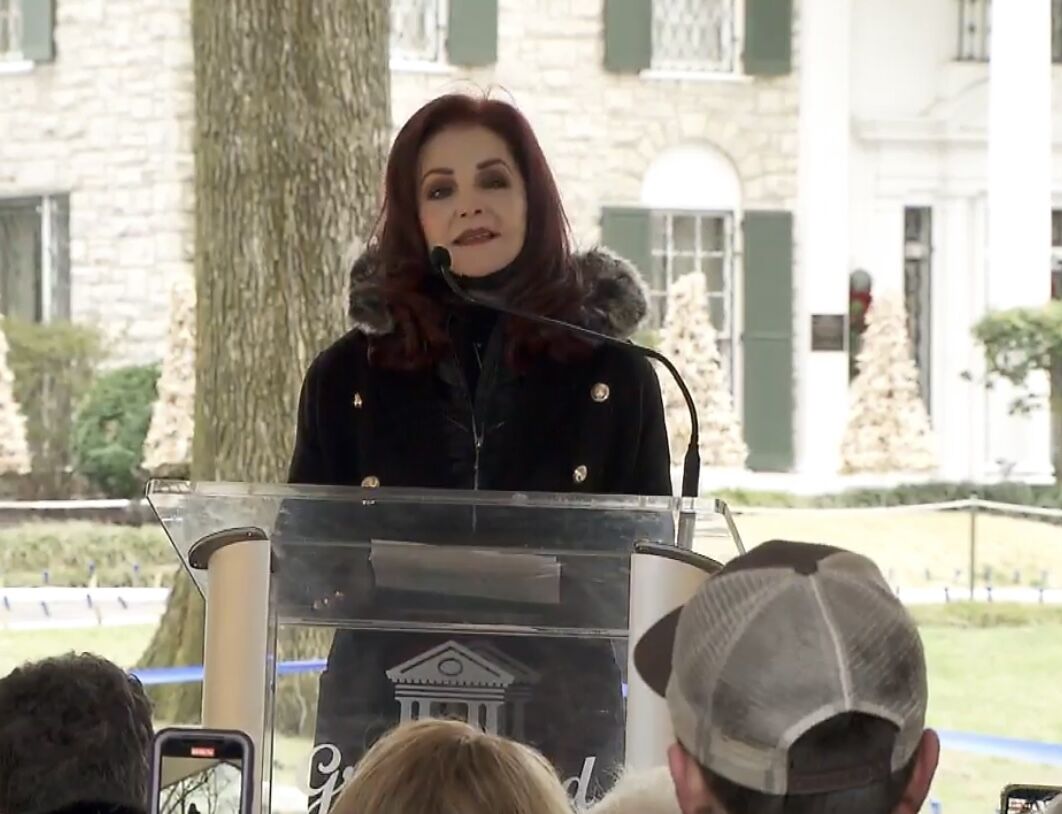 Former wife Priscilla Presley welcomed fans and on Saturday at Graceland and helped celebrate what would have been the 87th birthday of Elvis Presley. 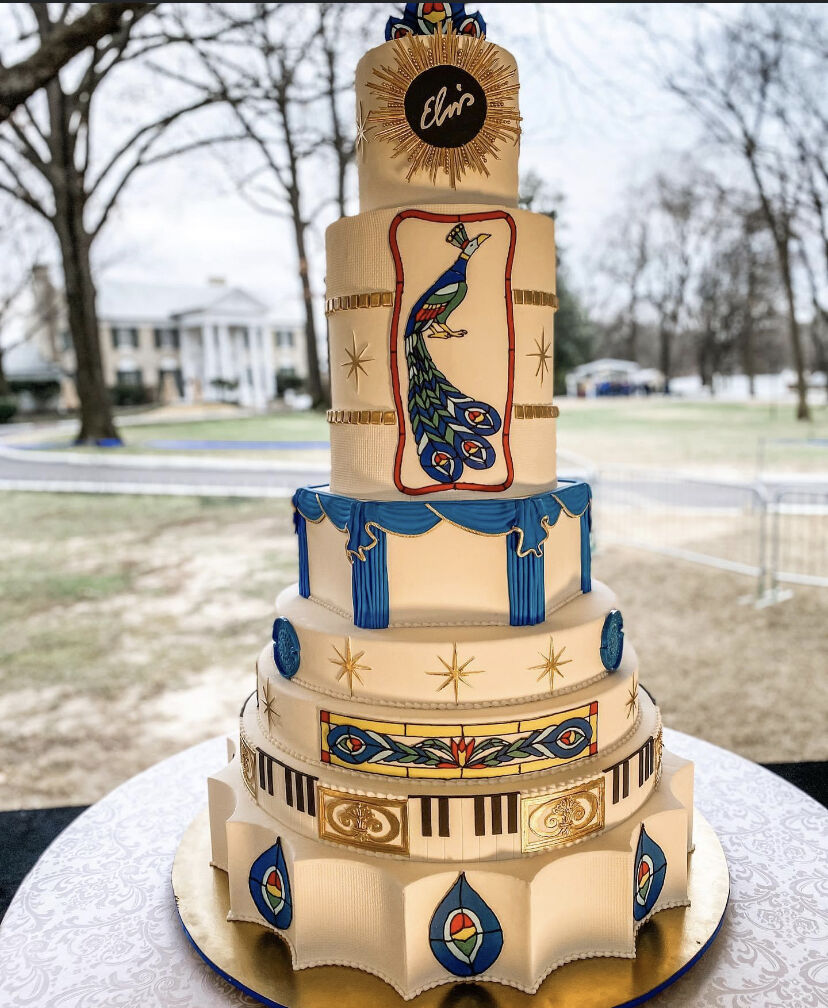 The birthday cake was inspired by the peacocks inside the music room at Graceland. 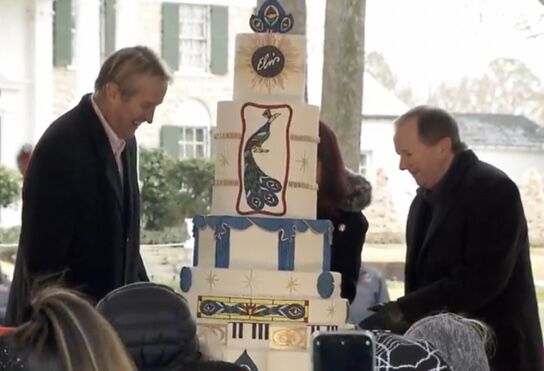 Former wife Priscilla Presley welcomed fans and on Saturday at Graceland and helped celebrate what would have been the 87th birthday of Elvis Presley.

The birthday cake was inspired by the peacocks inside the music room at Graceland.

Elvis fans from around the county and around the world braved chilly temperatures and gathered on the lawn at Graceland on Saturday to wish a Happy birthday to Elvis Presley on what would have been his 87th birthday.

The singer’s former wife, Priscilla, welcomed fans and thanked them for coming out to help celebrate, and for keeping his legacy alive during the annual birthday week celebration.

“I am so surprised at how many people are here,” Presley said. “I was a nervous wreck on the plane wondering ‘what if nobody showed up?’ I know how cold it is. But I know Elvis fans will always show up.”

Presley said she’s grateful for the continued love and support fans have shown Elvis over the years. She said Elvis never imagined that he would still be popular today, or that fans would be visiting his home to see how he lived and who he was.

“I know he would be thrilled to see all of his fans that he still has,” Presley said. “For all of you to keep coming back, all of the children and younger ones, I am still in awe that you are still here supporting him.”

The birthday celebration kicked off the start of “Elvis 45,” a yearlong celebration of special events and exhibits that will be held at Graceland and will culminate in August with Elvis Week, which marks the singer’s death 45 years ago.

“2022 is going to be a huge year for Elvis Presley and a huge year here at Graceland,” said DJ Argo of Elvis Radio. “Not only is it the 40th anniversary of Graceland opening to the public, but it’s the 65th anniversary of Elvis purchasing this beautiful home. And it is hard to believe that it was 45 years ago that we lost Elvis physically. But we are paying tribute all year long at Graceland to the man, his music, and his enduring legacy.”

Elvis Presley Enterprises CEO Jack Soden joked about how January 8 is always the coldest day in Memphis, and echoed what Presley said about the tremendous dedication of the fans, who have passed it on to more generations of fans.

“I guess it proves what devoted fans Elvis has to be here in the cold,” Soden said. “You’re going to be hearing 45 a lot this year. And the only way that legacy would be what it is - almost bigger than what it was 45 years ago - is you all. You have kept the legacy alive and growing. We’re here because you’re here.”

Memphis Convention and Visitors Bureau CEO Kevin Kane said Elvis’s birthday is a special day, one that is recognized around the world. Kane related a story about the one year he wasn’t able to attend the birthday celebration at Graceland because he was on an economic development mission to Israel, but saw fans paying tribute to Elvis in Tel Aviv.

“We came up on an area there - and I swear to you - we pulled up and they were having an Elvis tribute on January 8th,” Kane said. “That’s how special this day is.”

Presley said although Elvis has been gone for 45 years, his spirit is still very alive at Graceland.

“It’s a little bittersweet for me to be here in front of Graceland,” Presley said. “It’s 45 years since his passing and I still can’t believe it. I still think he’s here. I still feel him here. I go in Graceland and I feel his spirit. I know he’s living there. He’s there, trust me.”

Presley reflected on how private Elvis was and how much he loved Graceland.

“He had a very private life here,” Presley said. “This was the first place he would come to after a movie, after a show, after tours. He would come home. This is home. He couldn’t wait to be at Graceland. And the more I come, I see why. It’s just a place of calmness and memories and friends. It was where he completely let go.”

Presley said that although Elvis was larger than life and had the image of being the King of Rock ’n’ Roll, he was also a lot of fun and a loving person who cared deeply for humanity.

“Yes, he was an image,” Presley said. “We have all his costumes, automobiles, his  motorcycles, and everything here. That all meant something. But his humanity was very touching and true. I know I’ve  not met anyone like him. He was unique. He was special. And he was meant to be here for a purpose. And he is.”

Presley then cut a giant sized birthday cake inspired by the peacock theme in the music room at Graceland following the reading of a proclamation from Memphis Mayor Jim Strickland and Shelby County Mayor Lee Harris commemorating the day.

“It’s frozen,” Presley joked as she tried to cut it. “This is a big cake.”

Fans were then invited to go across the street to the Elvis Presley’s Memphis showroom for free cake.