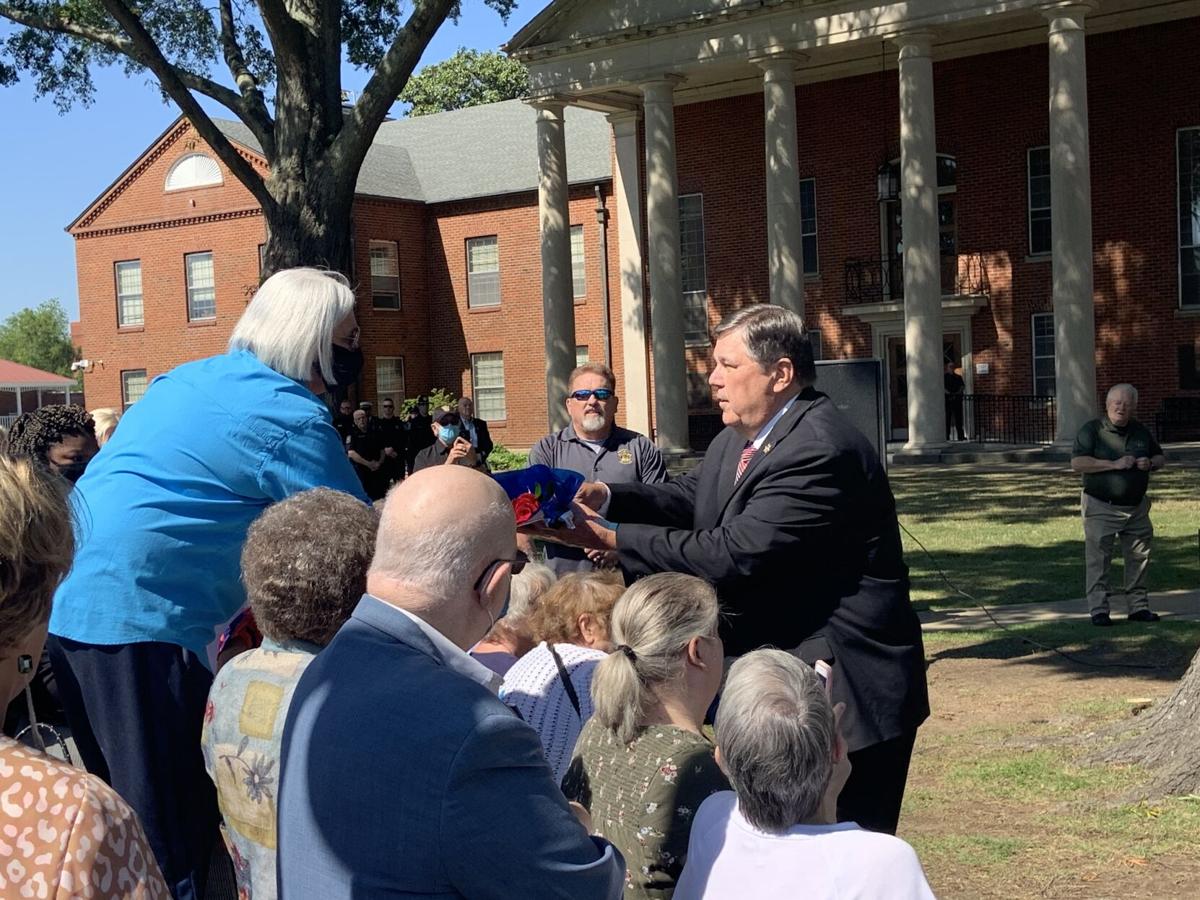 DeSoto County Sheriff Bill Rasco presents a flag to a family member of an officer who lost his life in the line of duty at the DeSoto County Fallen Heroes memorial service. 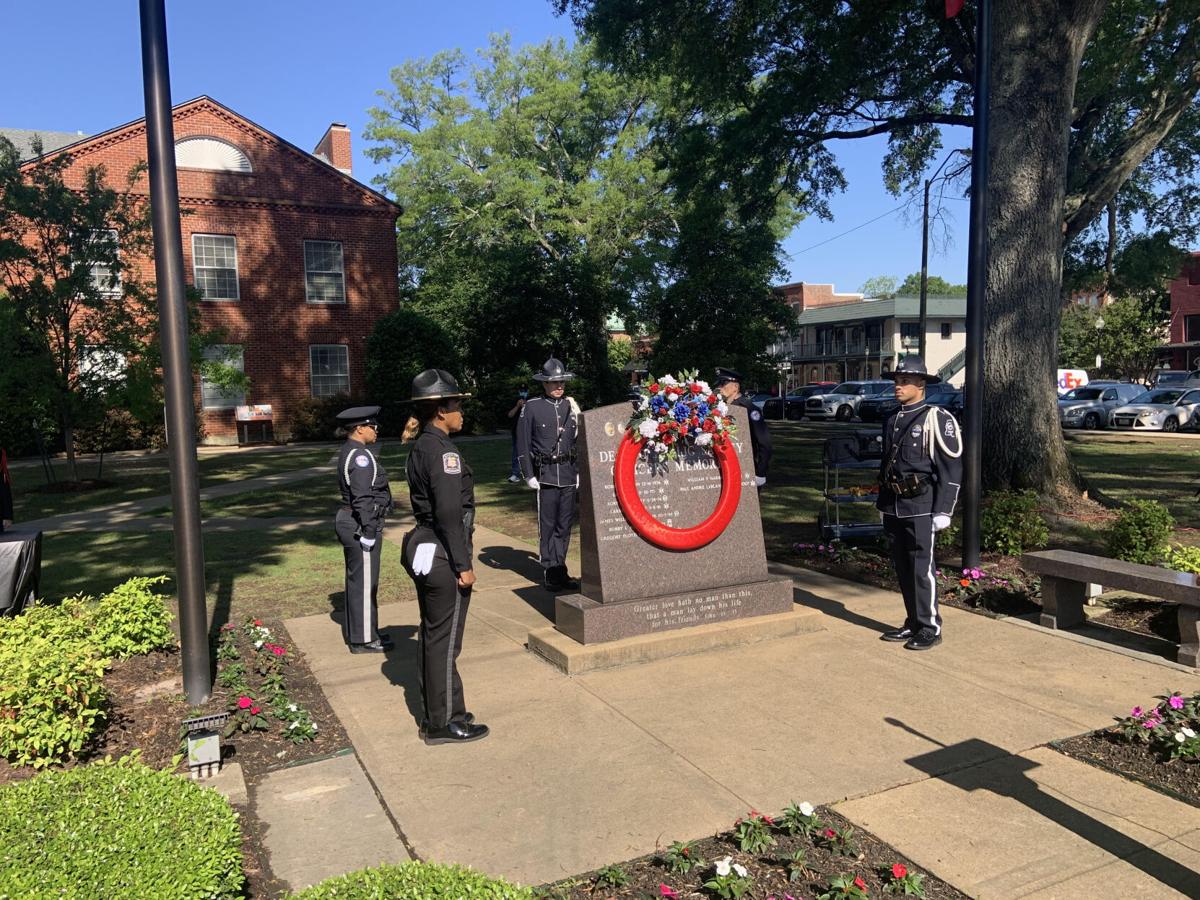 An honor guard made up of DeSoto County law enforcement officers stand at attention at the DeSoto County Public Safety Officers Memorial on the courthouse square in Hernando during a memorial service to honor the county's fallen heroes. 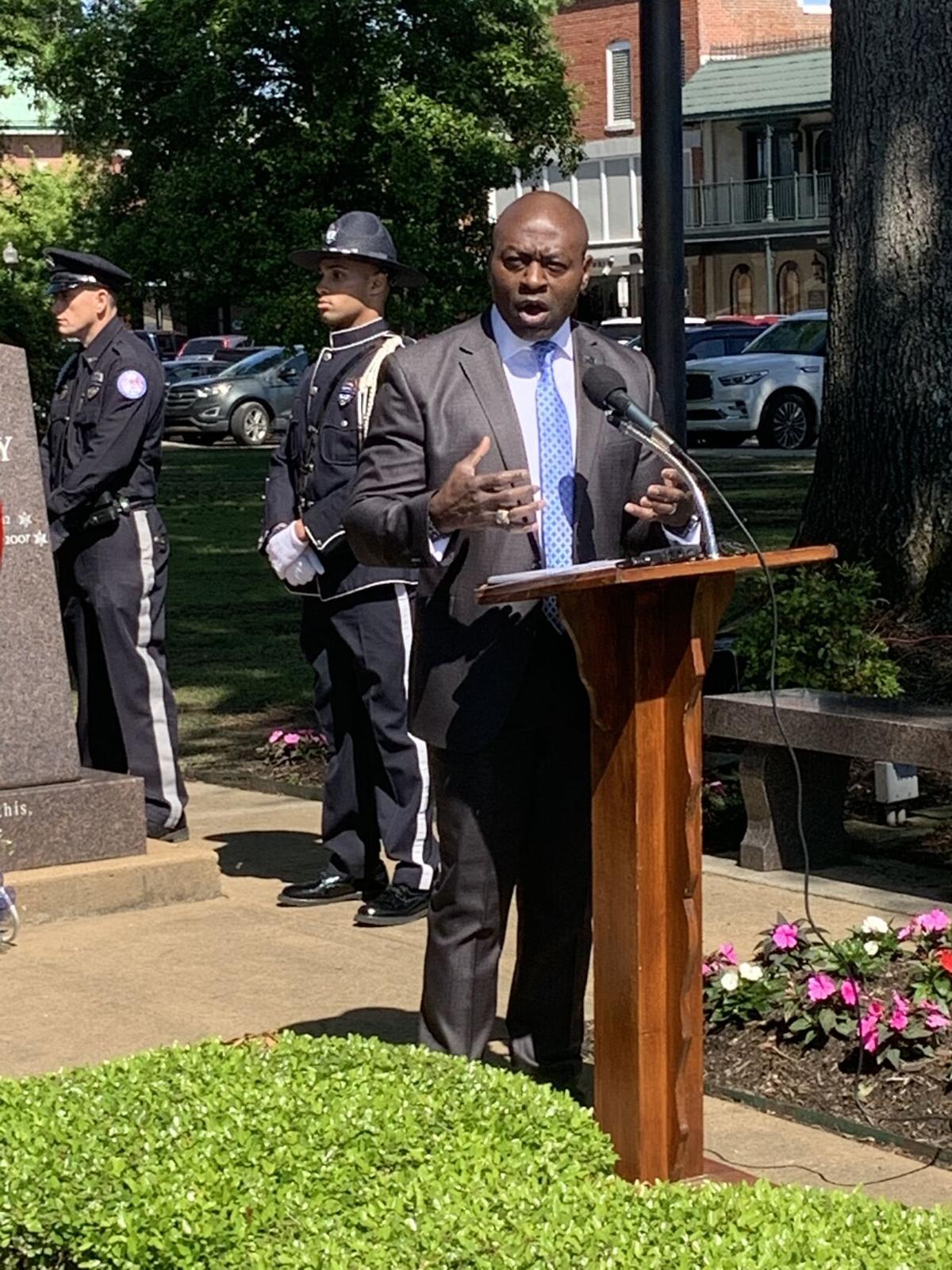 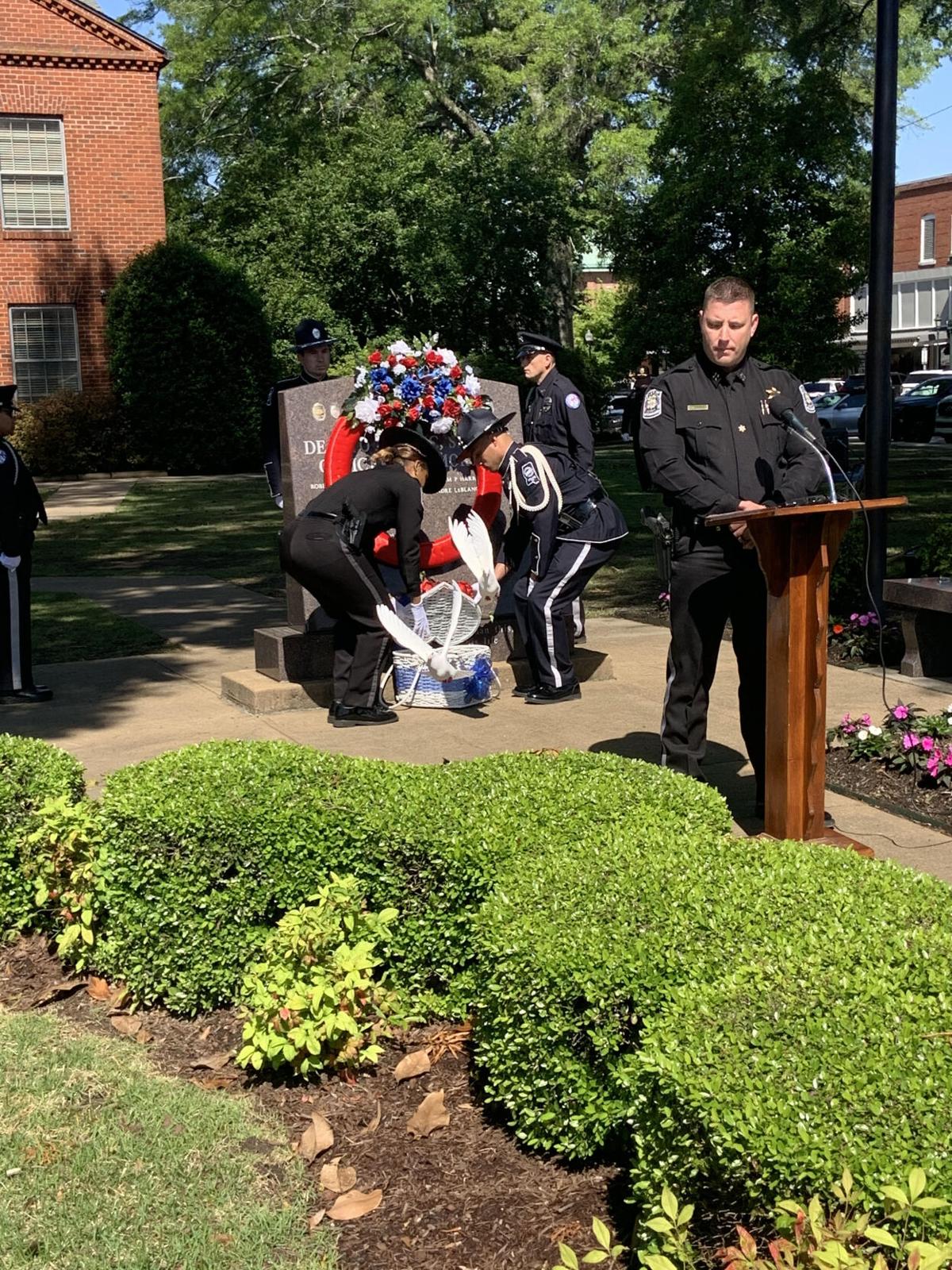 Officers release white doves to honor the memories of the men who lost their lives in the line of duty serving DeSoto County. 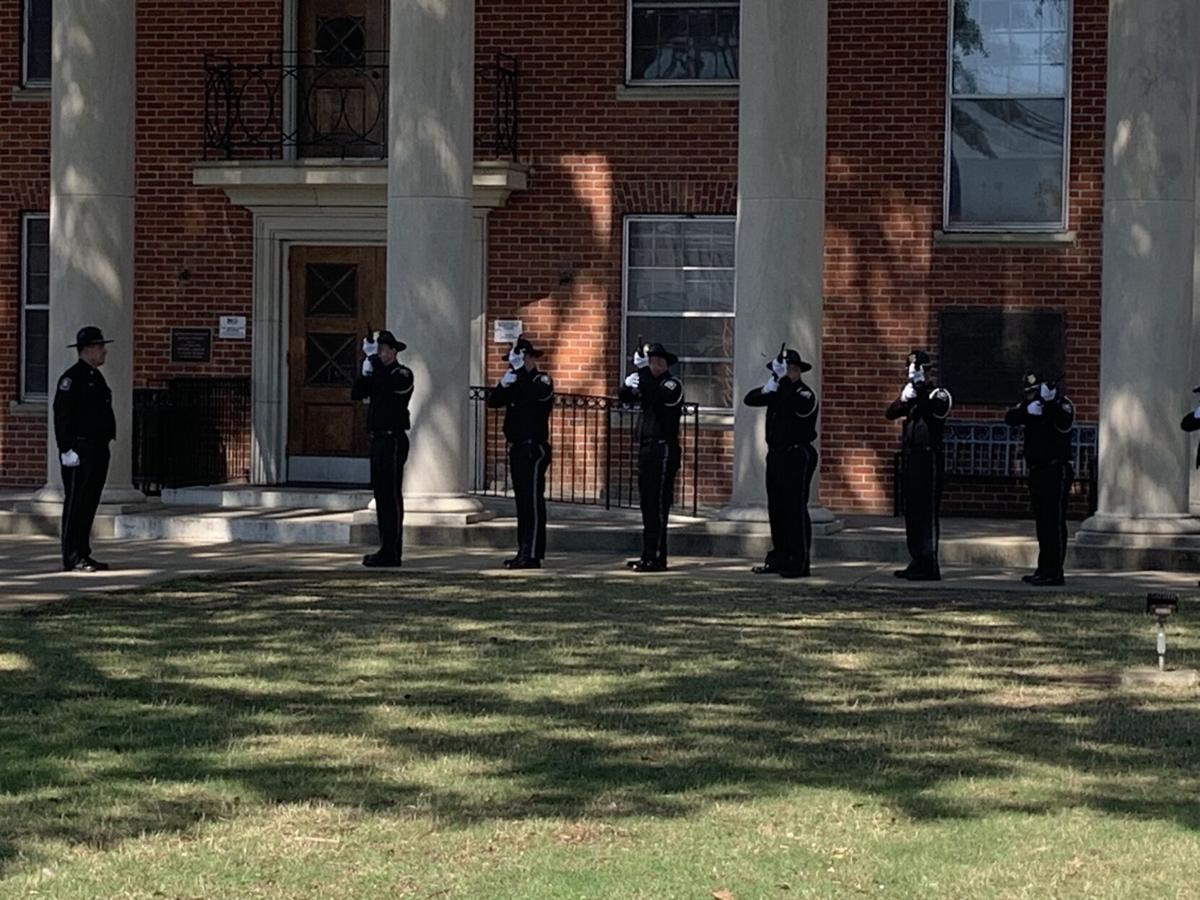 A ceremonial firing squad shoots off a three-volley salute in honor of the fallen DeSoto County law enforcement heroes. 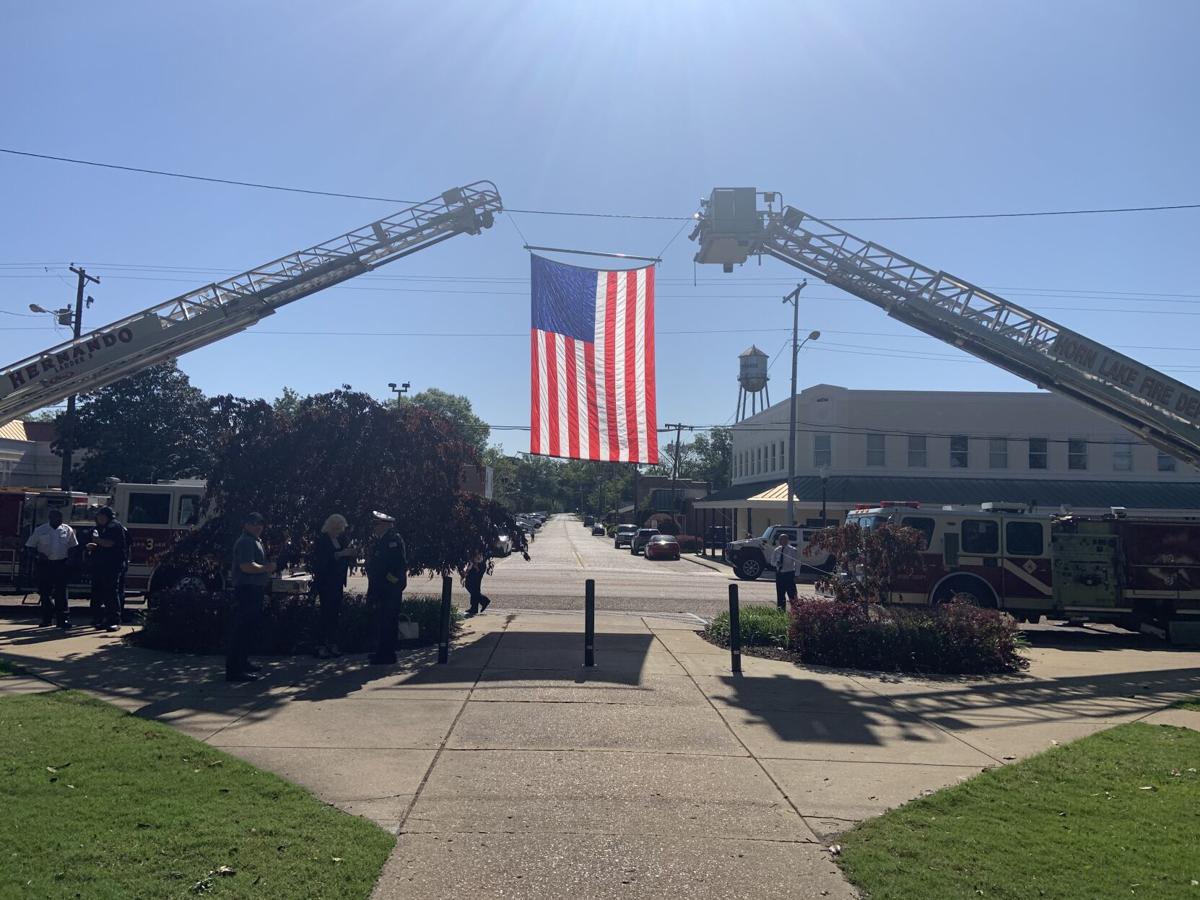 DeSoto County Sheriff Bill Rasco presents a flag to a family member of an officer who lost his life in the line of duty at the DeSoto County Fallen Heroes memorial service.

An honor guard made up of DeSoto County law enforcement officers stand at attention at the DeSoto County Public Safety Officers Memorial on the courthouse square in Hernando during a memorial service to honor the county's fallen heroes.

Officers release white doves to honor the memories of the men who lost their lives in the line of duty serving DeSoto County.

A ceremonial firing squad shoots off a three-volley salute in honor of the fallen DeSoto County law enforcement heroes.

When Lt. Colonel Thomas Tuggle II of Mississippi Highway Patrol was asked to be the keynote speaker at this year’s DeSoto County Fallen Heroes memorial service, he was asked to appear in uniform.

But with all of the recent negativity and anti-police sentiment prevalent in the news, Tuggle instead dressed in civilian clothes because after 30 years of trying to be politically correct, he’s tired of holding his tongue.

Tuggle paid tribute to those who gave their lives in the line of duty protecting DeSoto County and their loved ones, but said he won’t sit by quietly any more and take all of the hostility being directed at law enforcement because it dishonors their sacrifice.

“I didn’t want to discuss the current climate and its relentless attack on our profession,” Tuggle said. “But if I didn’t speak out against it, then I am silently condoning it, therefore allowing the sacrifices of our fallen to be in vain. I can’t accept that.

“There are elements in society that have made it their mission to make us public enemy number one. We should honor the selfless dedication of our fallen, while standing up against this camouflage degradation.”

Dozens of residents, family members, elected officials and police and firefighters from DeSoto County gathered at the courthouse square in Hernando Friday morning at the DeSoto County Public Safety Officers Memorial to honor the memory of the nine officers lost in the line of duty while protecting and serving the community.

The ceremony included the singing of the national anthem, Amazing Grace, a release of white doves, along with an honor guard complete with a gun salute, the playing of Taps, and a helicopter flyover.

Sheriff Bill Rasco presented family members representing each fallen officer a flag as a bell tolled with the reading of each name.

Rasco’s relative, Constable Robert Dodson, is one of the names on the memorial. Dodson lost his life on December 16, 1936.

“It happened before I was born,” Rasco said. “But I remember my family talking about it. He was on his way to arrest a guy for stealing some cotton. The guy shot and killed him. He was on horseback back in those days.”

Rasco said he visits the memorial often and stressed how important it is for the county to show its appreciation to those men and their families.

“It’s heartbreaking to know that we have a family member on this wall,” Rasco said. “So I know what these families are going through. I still thank them for the service they gave the county. This is a nice way for us to show our appreciation for their family member who died. It means everything to me.”

Rasco said this year’s memorial may be the most important one yet given the current mood of the country towards law enforcement.

“It’s more important today because our guys recognize that they have a target on their back every day they go out there,” Rasco said. “It is rewarding to us and them to give these families who have already lost family members and to tell them that we appreciate what they have done. And for the families here today, it shows their appreciation for what our guys are doing for them.”

Tuggle reminded the audience that a hero is someone who has given his or her life to something bigger than themselves, and said it is fitting to take a day to honor those who made the ultimate sacrifice.

“DeSoto County owes a great deal of debt to its fallen  heroes, a debt we can never fully repay, but we can honor their sacrifice,” Tuggle said. “This memorial is a visual reminder of the daily sacrifices made by the brave men and women wearing the badge.”

As executive director of the Mississippi Law Enforcement Officer’s Training Academy, Tuggle said the state is stepping up the intensity of entry level training for police officers to meet new challenges. He said while some recent incidents of excessive force by police can’t be justified, one common denominator stands out - non-compliance.

Tuggle challenged the public to have the courage to stand with police as they are now having to defend themselves against unjust charges of racism and unjust enforcement of the law.

“DeSoto County, I am confident that most people believe and support us despite the many questions surrounding how we perform our professional duties, not only the job we do, but what we represent,” Tuggle said. “We represent the spirit and success of the democracy. Anarchy is the final destination of our country without law and order.”

Jerry Perry, who worked for the sheriff’s department for 32 years, said he still gets emotional when he attends this ceremony thinking about the officers who died in the line of duty.

“You hear the bells and it brings back a lot of memories,” Perry said.

He remembers when Mississippi Highway Patrol Trooper Bobby Wells, Jr. lost his life while on patrol. Wells was killed on June 25, 1995 when he was struck by a vehicle after stopping a speeder on I-55 near Hernando. Wells had been with the agency for just over 18 months. A section of I-55 at mile marker 277 is dedicated in his memory.

“It’s good to recognize our people in uniform and give them a little extra pat on the back once a year and say please keep it up,” Perry said.

Vote now: Who should be SBLive’s Mississippi high school baseball player of the week?

Here are the candidates for SBLive’s Mississippi high school softball player of the week for May 31-June 6 as nominated by fans, readers and SBLive’s staff.

Who are the 2020-2021 Gatorade high school boys basketball players of the year in each state?

In a year where athletes have navigated myriad hurdles stemming from the pandemic, here are the 48 (and counting) Gatorade boys basketball players of the year.

The Jaguars put a bow on one of the best seasons in recent memory with an 11-1 win over cross-town rival Northwest Rankin to sweep the best-of-three championship series.

Behind some stellar pitching and timely hitting, the Knights beat Sumrall 5-2 to sweep the MHSAA 4A Championship Series and claim the program's state-record 15th state title Saturday at Trustmark Park.

Behind a stellar offensive performance and relentless hitting, the Blue Devils raced past Magee 12-4 in Saturday's decisive Game Three to claim the MHSAA Class 3A State Championship at Trustmark Park.

Saltillo right-hander Drake Douglas was looking for redemption in the winner-take-all Game Three of the 5A Championship series after a less-than-stellar performance in Game One. Luckily for the Tigers, the sophomore delivered.

In what was, so far, the best baseball game of the week, the Jaguars pulled their 33rd win out of the fire and salvaged a gem of a start from their star pitcher.

The Knights' two runs in the sixth came on an RBI single to left by Brooks Buchanan, and Jackson Parker scored on a throwing error on a pickoff attempt at second base.

Twice as nice: Taylorsville celebrates another state title with 8-0 win over East Union in MHSAA 2A Baseball Championship

The lefty kept Pascagoula’s hitters off-balance and got every big out when he needed it.