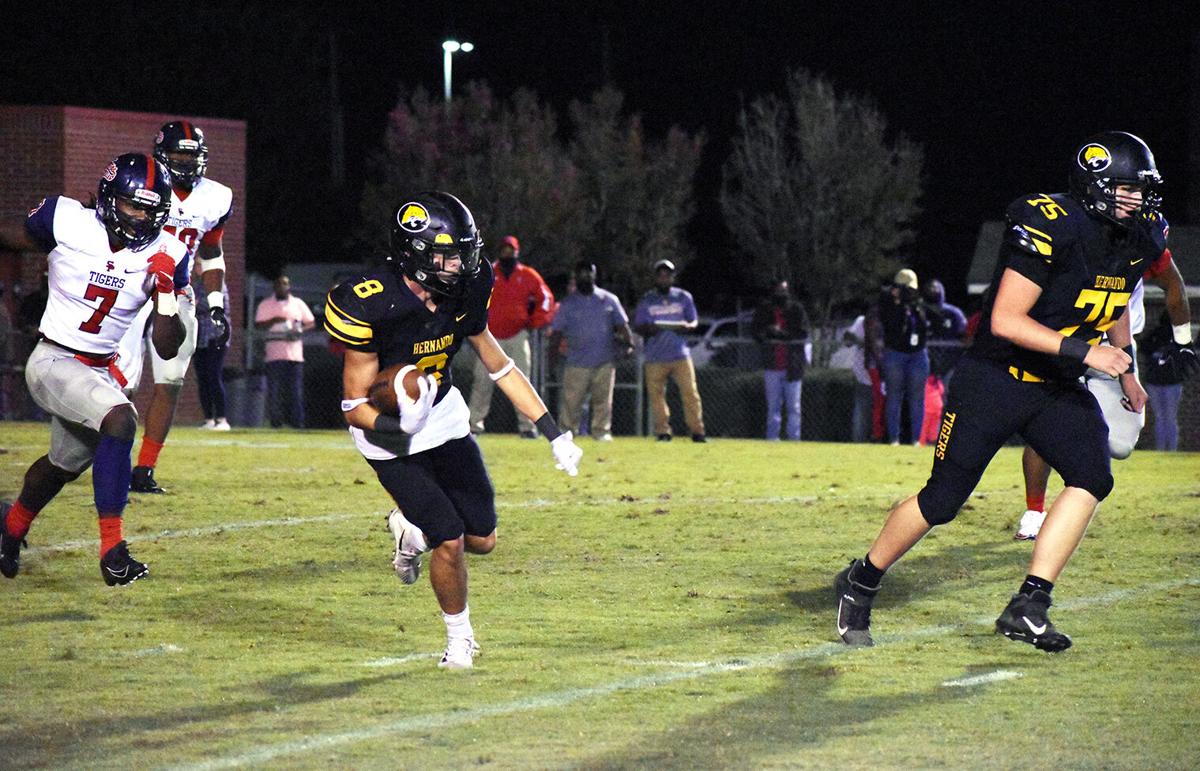 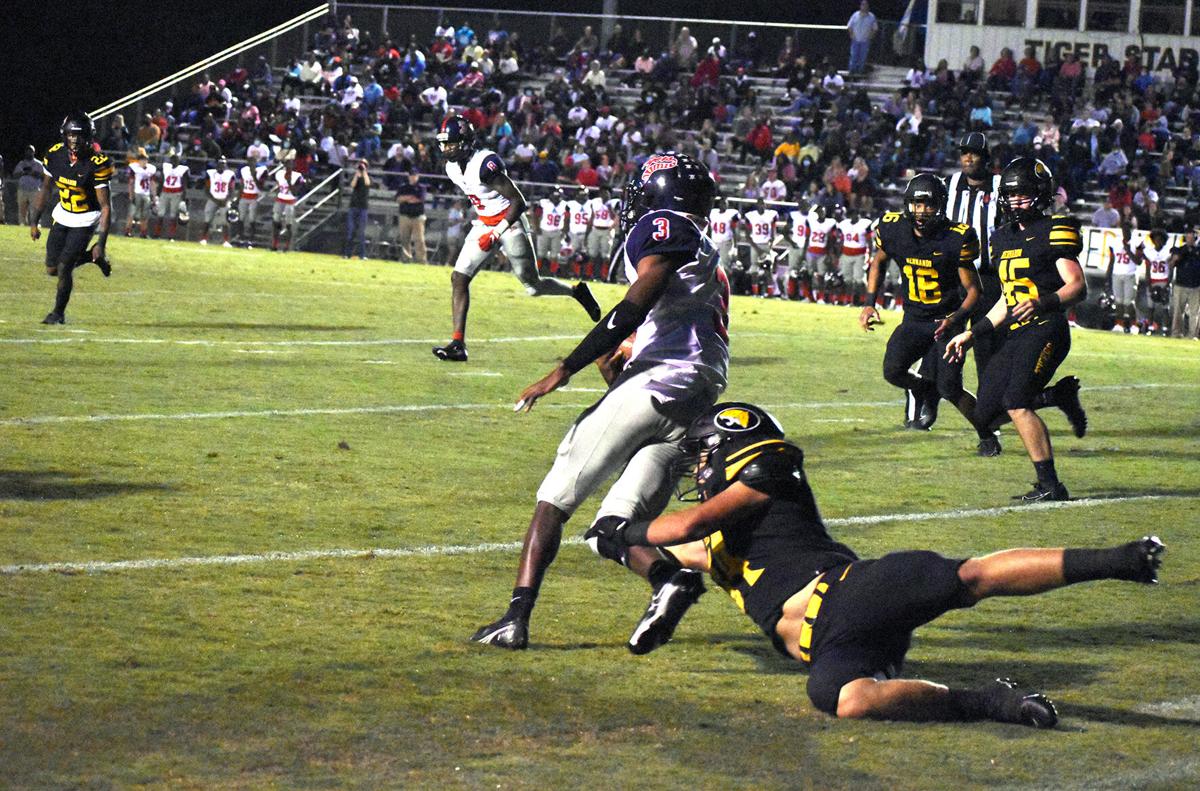 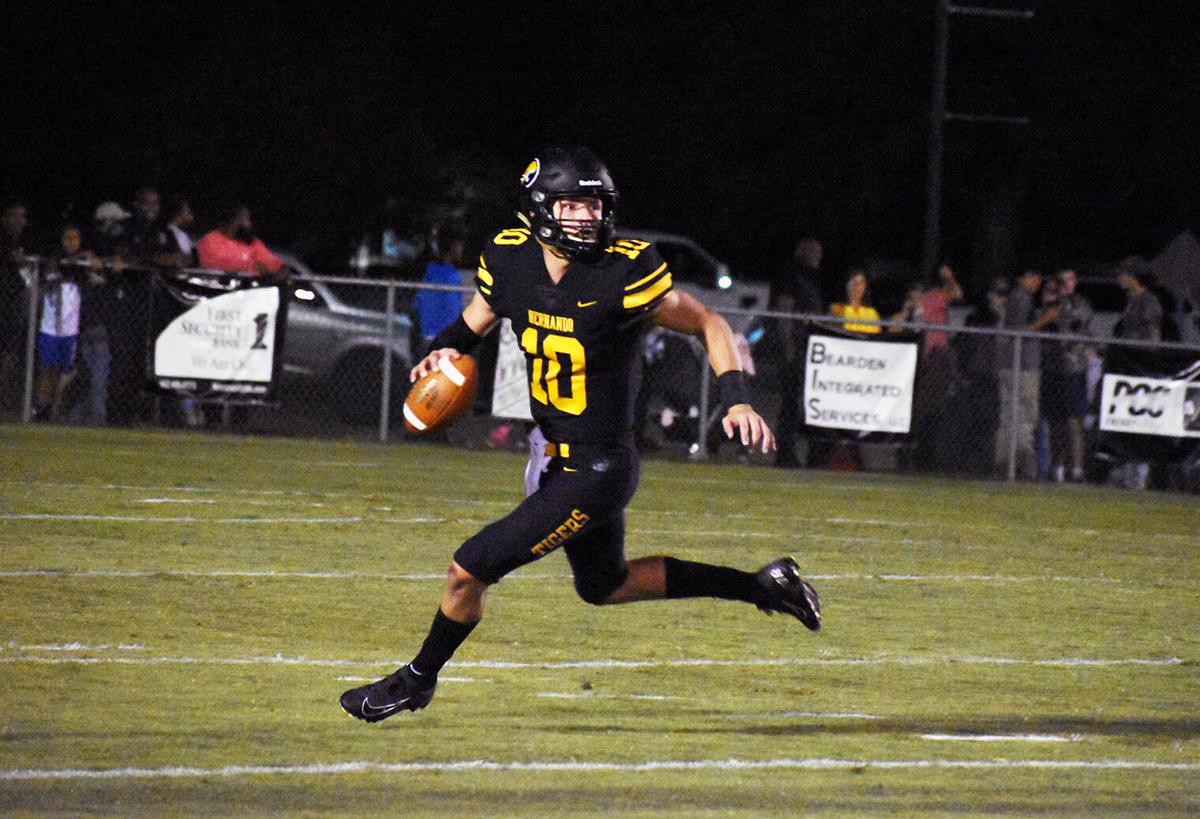 Senior quarterback Zach Wilcke scans downfield for an open man as he runs away from South Panola defenders.

Senior quarterback Zach Wilcke scans downfield for an open man as he runs away from South Panola defenders.

South Panola got their revenge on the Hernando Tigers after last year’s loss by beating Hernando, 25-9 at Tiger Stadium in the first district game of the season, Sept. 24.

Hernando’s all time record against South Panola fell to 2-20 after Friday’s rivalry game ended in defeat.

The game got off to a slow start with neither team able to overcome the other in the first quarter.

In the second quarter, the historically dominant South Panola showed why they’ve only ever lost two games to Hernando. South Panola drove in the first touchdown of the game four minutes into the second quarter. Hernando’s junior defensive back Jericho Smith denied the extra point with a block and put the score at 6-0.

Hernando answered the touchdown with a long pass from senior quarterback Zach Wilcke to move into the red zone at the 18-yard line. The Tigers weren’t able to punch through South Panola’s defense so they sent out junior kicker Jackson Uselton.

He picked up three points on the 35-yard field goal to bump the score to 6-3. Uselton’s field goal would be Hernando’s only points until the final seconds of the game.

South Panola got the ball back with less than a minute left in the half and quickly moved it downfield to the 25-yard line. After two flags on South Panola and a near touchdown pass blocked by sophomore defensive back Ryan Taylor, South Panola was at second down with 29 yards to go and only 31 seconds before halftime.

Despite their setbacks, South Panola was able to get the first down and found themselves in a first-and-goal situation on the 6-yard line with 19 seconds left. South Panola’s quarterback connected with senior wide receiver Ethan Johnson for their second touchdown to move the score to 12-3 after a failed PAT attempt and close the first half.

The game slowed back down after halftime until sophomore Julius Pope ran 7 yards to carry in another touchdown for South Panola. They attempted a two-point conversion but couldn’t find a hole in the Tiger’s defense and failed, bumping the score up to 18-3.

South Panola forced Hernando to punt on their next possession and got the ball back on the 30-yard line. They drove it 46 yards down the field, inching a little further each play and killing the final minutes of the quarter before failing to convert to a first down and turning the ball over to Hernando on the 24-yard line with nine seconds before the fourth quarter.

Hernando started their next drive productively, getting the first down and then another with a personal foul by a South Panola player. Shortly after, it started to rain yellow flags at Tiger Stadium and Hernando found themselves in a fourth-and-long situation with 45 yards needed for another first down.

Hernando is forced to punt and South Panola drives straight through them again. Junior running back D’Mariun Perteet carried it in for one last South Panola touchdown with 6:13 left in the game to change the score to 25-3.

South Panola intercepted a pass on Hernando’s next drive and got the ball back on the 50-yard line. Hernando followed it with an interception of their own by junior defensive back Dyland Cubbage with 1:44 left on the clock.

Wilcke fired a pass to junior wide receiver Eli Mashburn to get to the 21-yard line. Then Wilcke scrambled for 16 yards and was pushed out of bounds, stopping the clock at 15 seconds. Wilcke hits Mashburn again but this time for Hernando’s first and only touchdown of the night. The PAT misses and the score is finalized at 25-9.

Hernando Head Coach Will Wolfe was unavailable for comment.