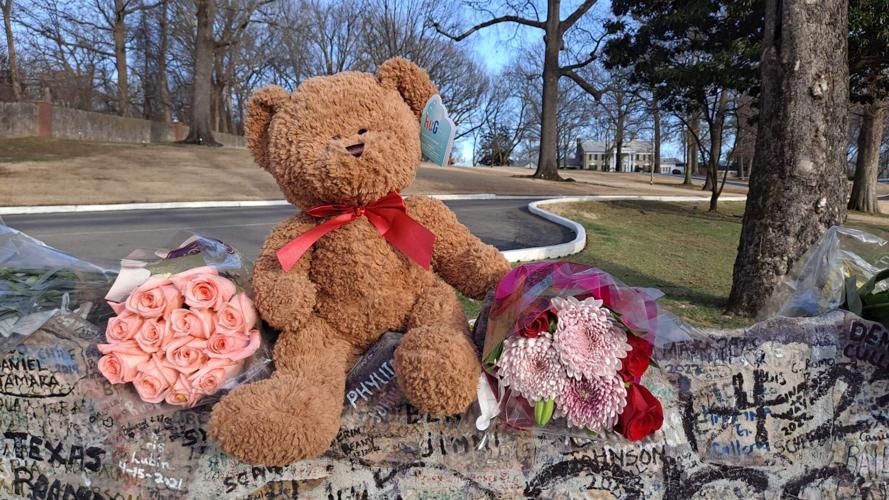 Fans left messages of condolence and mementos on the wall at Graceland to mourn the passing of Elvis’ daughter, Lisa Marie Presley. 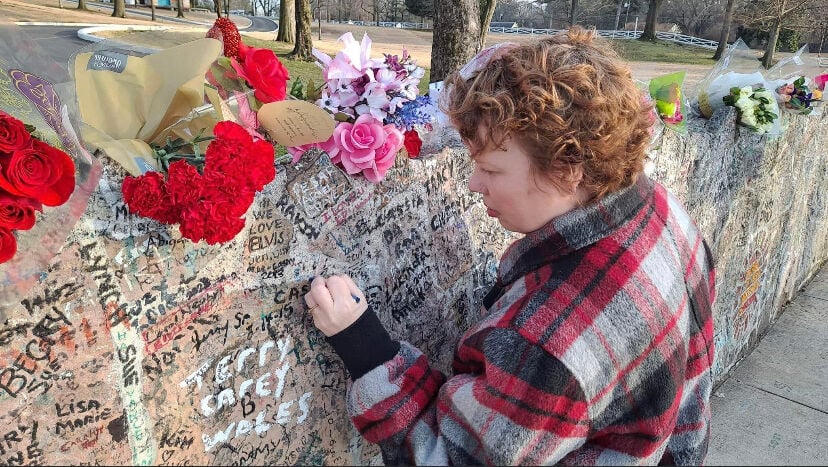 Elvis fan Lacy Mitchell of Batesville, Arkansas adds her name to the wall at Graceland after placing a bouquet of flowers in memory of the singer’s daughter. 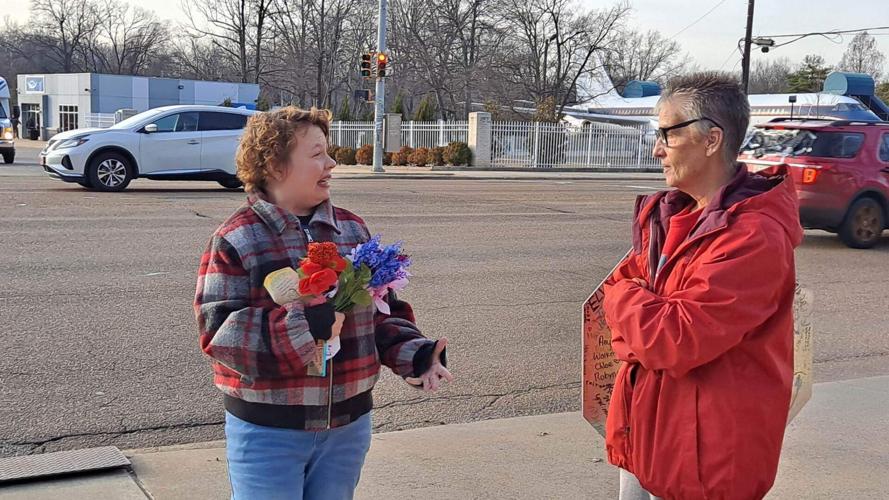 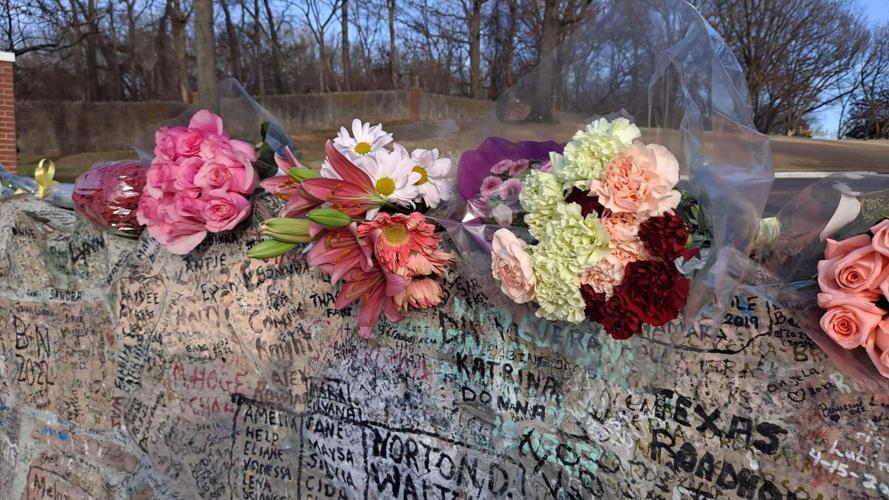 Dozens of bouquets of flowers were left at the gates of Graceland as a final farewell to Lisa Marie Presley.

Fans left messages of condolence and mementos on the wall at Graceland to mourn the passing of Elvis’ daughter, Lisa Marie Presley.

Elvis fan Lacy Mitchell of Batesville, Arkansas adds her name to the wall at Graceland after placing a bouquet of flowers in memory of the singer’s daughter.

Dozens of bouquets of flowers were left at the gates of Graceland as a final farewell to Lisa Marie Presley.

For Sheila Gamble, the news of Lisa Marie Presley’s death brings a sense of finality for the area where Elvis Presley lived 20 years and where millions have flocked since his passing 45 years ago to see where the beloved entertainer called home. It’s where Lisa, his only child, also called home and where she will now be buried after dying Jan. 12 following full cardiac arrest at the age of 54 while at her California residence.

“It just feels like the end,” Gamble, a resident of Hernando said last Saturday afternoon while standing in front of the Alabama fieldstone wall and wrought iron music note gates now dotted with fresh and silk flowers left by those mourning the sudden loss.

Lisa Marie’s last visit to the house in Memphis came just days before her death when she attended the Jan. 8 reception of her father’s 88th birthday celebration, telling the crowd of fans in part that they were what gets “me out of the house” as she continued to mourn the death of her son Benjamin Keough to suicide at age 27 in 2020.

Four days later, Lisa Marie, too, would be gone.

Consider it the last link. The woman who would go on to forge her own path in singing-songwriting but be held under a microscope whether it be for her choice of music or choices in husbands. Some might also consider her the last link to the man considered the greatest solo entertainer who ever lived and whose shadow she always lived under.

Her children now have to carry on that legacy, but as Gamble noted, they only know of him. They know the stories they are told and know his music, but unlike their mother, they were not there when their grandfather was alive for those firsthand accounts.

It’s not unlike other family dynamics, including Gamble's, albeit out of the spotlight, who never had some of those direct relationships. Gamble thinks of the relatives she never personally knew, only the stories she was told.

It's no one's fault. That's the way life goes.

Lisa Marie’s daughters, Riley Keough, and twins Finley and Harper Lockwood, will carry on the legacy for fans as the home, grounds and personal effects have been placed in a trust they will inherit, according to representatives.

For that, Gamble is glad.

“But, a part of me feels like it just won’t be the same, with Lisa now gone. … It feels like the end … the last piece of Elvis,” she said.

Lisa Marie was 9 when Elvis died from heart-related issues in 1977. She lived behind the walls of the 13-acre mansion and was there that hot August day when the news broke and the boulevard named for her father out front became nothing but a sea of onlookers in shock that their “king” had died.

Gamble was there that day, too, so it only felt right to drive the 20 or so miles to Whitehaven this past weekend.

“I only felt I needed to do the same for Lisa Marie,” she said, wiping tears away, the fragrance of flowers wafting in the air.

Living in Hernando and growing up in what she said was the country, Gamble said she often joined her mother on grocery shopping trips to Whitehaven on Highway 51.

Those were the days before Walmart or even the town of Southaven, which was nothing more than a “gravel road, really” at that time, she said, and Whitehaven was the area to go.

Still, it never failed that Elvis would often be coming or going, from his home when her mother only wanted to get to the store. This would cause a standstill and her mother had to stop the car whether she liked it or not, as it seemed passersby would lose their sense of how to drive, often stopping their cars in the middle of the street, jumping out of them, leaving their doors open just to get close to the entertainer outside his house.

Those occasions were something that Gamble believes her mother deep down likely missed after Elvis died Aug. 16, 1977.

Funny how that happens, Gamble said, noting how Graceland mansion was something that many locals, including herself, almost took for granted because “it was always there,” especially when Elvis was alive and it was nothing rare to see him outside the house.

“He was so cool,” Gamble recalled, smiling. “No one I ever knew dressed like that,” with sunglasses at night, “and I always wondered why my Daddy never looked like that.”

Still, Gamble regrets not going to Graceland when her grandfather redid the cabinetry in Elvis’ kitchen in and around 1969, working from plans to create the cabinets the entertainer wanted. Gamble’s grandfather, who even after losing his eyesight many years later, still worked in cabinet-making by “feeling” the work done by his coworkers. He also was not afraid to tell others what he thought they could do better.

But during those early years, her grandfather, who went by Mo,” asked if Gamble would like to go with him to the singer’s home while he worked.

Gamble, who was about 10 at the time, recalled being on her horse and playing in the dirt. Knowing her mother would want her to put on her shoes to go to anyone's home, especially Elvis Presley's, Gamble wasn’t interested in going if it meant doing that. “I was just a country kid.”

“Now, I think back and wonder why I didn’t.”

The Presley family will hold a public memorial service on Sunday, Jan. 22 at 9 a.m. on the front lawn of Graceland in Memphis. Lisa Marie will be buried in the family gravesite in the Meditation Garden at Graceland next to her son, Benjamin Keough, who died by suicide in 2020. She will join her father, Elvis Presley, who died in August 1977, as well as her grandparents Vernon and Gladys Presley, Elvis’s grandmother, Minnie Mae, and a twin brother, Jessie, who died at birth.

In lieu of flowers, the family requests donations be made to The Elvis Presley Charitable Foundation, 3734 Elvis Presley Blvd., Memphis, TN  38116