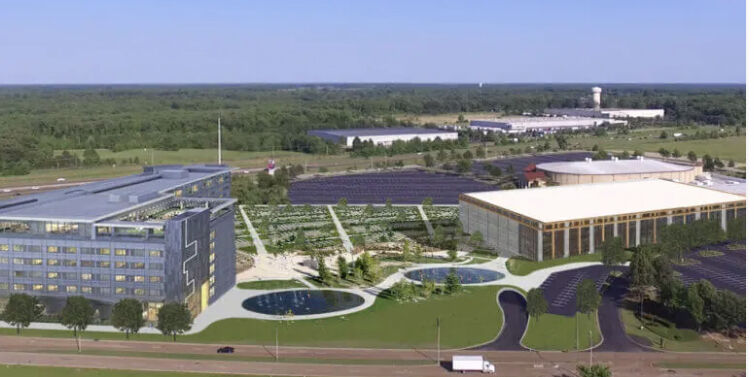 After more than three years of planning and discussion, “Project Sky” has been given the green light.

DeSoto County Board of Supervisors on Monday voted unanimously to issue $35 million in bonds to finance the expansion of the Landers Center.

The project will include an attached luxury brand six-story hotel, free-standing restaurant, and the addition of more than 70,000 square feet of convention and event space.

The DeSoto County Convention and Visitors Bureau, which operates the Landers Center, will contribute $8 million of its own toward the construction cost.

District 2 Supervisor and Board President Mark Gardner said officials have been talking about expanding the facility since 2018, then COVID-19 pandemic threw a further monkey wrench into the process.

Gardner said the expansion will allow the facility to host bigger and better events and trade shows.

“Everything stood down for a bit,” Gardner said. “But it’s back on track. (Southaven) has some good (hotel) prospects they are talking to. The convention center without a four or five star hotel doesn’t happen. So we are at that crossroads.”

Southaven Mayor Darren Musselwhite, who came up with the name “Project Sky” because he wanted to attract a big hotel that was unique to DeSoto County, said the county’s decision to go ahead and fund the expansion launches DeSoto County and Southaven into a new economic plateau.

“What this does for us from an economic development standpoint is it puts us on the map,” Musselwhite said. “It makes us a destination type location.”

Musselwhite told county officials that the city is talking to multiple prospects who are interested in bringing a full-service upscale hotel to Southaven and DeSoto County, brands that are not currently in north Mississippi.

He said the Landers Center is the perfect location for a hotel of this type because it is already the hub of tourism in the county. The Landers Center is also located in the city’s “Metro District,” a special planning and zoning area located along the I-55/Church Road interchange that allows the city to offer special incentives on construction projects valued at $25 million or more.

“The reason we did it is because we want to make this area special,” Musselwhite said. “We think the real estate location is key in the Memphis metro and in a regional perspective. The Landers Center is perfectly placed.”

Musselwhite said attracting an upscale hotel is contingent upon the Landers Center having a convention center, which he believes is worth the investment and will be a “game changer.”

“I know $50 million is a lot of money,” Musselwhite said. “I envision this to be an investment. It’s not a cost. It’s what called leveraged debt. It’s a very wise financial move to leverage your debt on something that is going to produce big time dividends. I believe economically that a convention center here with a hotel will pay the citizens back exponentially on the return in the investment.”

The  hotel will have at least 200 guest rooms, a resort-style pool, and restaurant.

“We spoke to some amateur sports events, consumer shows, RV/boat shows, bridal shows - which the Landers Center does somewhat - but it is limited because it lacks a true convention hall,” Othen said. “When we looked at it on a square footage basis, it’s not ideal for that. It’s not large enough to be a true trade venue.”

And because there isn’t an attached hotel, Othen said event planners look instead to Jackson, Mississippi, which has 85,000 square feet of space available, and the casinos on the Gulf Cost or the Mississippi Coast Coliseum and Convention Center in Biloxi to host their events.

“They showed interest in the Landers Center and the Memphis market, but their big deterrent is the presence of an onsite hotel,” Othen said. “We can’t get the same type of convention and trade show space that they have a lock on.”

Othen said the tourism industry is expected to rebound and reach pre-pandemic levels by 2023 - a year earlier than originally expected.

“We’re really changing the purpose of this center from being a sort of drive-in entertainment and small meeting type center, into a true economic engine through larger events with the hotel being there,” Othen said.

He projects that the added space will result in about $33 million in additional spending and about $12 million in direct spending into the local economy for a total economic benefit to DeSoto County of $45 million a year, and will create 662 full time jobs.

“That is moving the needle quite a bit,” Othen said. “With the hotel and convention center, it is going to be really, really transformative.”

Landers Center Executive Director Todd Mastry said the mission of the convention and visitors bureau is to bring more tourism and generate more economic impact to DeSoto Count, and the numbers for the expansion clearly show that it would accomplish that goal.

The Landers Center has had to turn down hundreds of event requests because the facility was not big enough to accommodate the needs adequately.

“It’s not just about us,” Mastry said. “It’s what is going to happen to the county as a result of this metropolitan zone. The dominoes will start falling now and the economic impact is going to be tremendous.”

“I see this as being something that takes DeSoto County and Southaven to a new economic plateau,” Musselwhite said.

Gardner thanked Musselwhite and his staff for working hand-in-hand with the county to make the expansion a reality.

“We say all the time that government that works together works better,” Gardner said. “And this is a perfect example.”

“I am very excited that day is here,” Caldwell said. “When we travel to other conventions, we see that people really do want to come to DeSoto County, but we haven’t had the space.”

Construction is expected to begin in summer 2022 and take an estimated 24 months to complete.