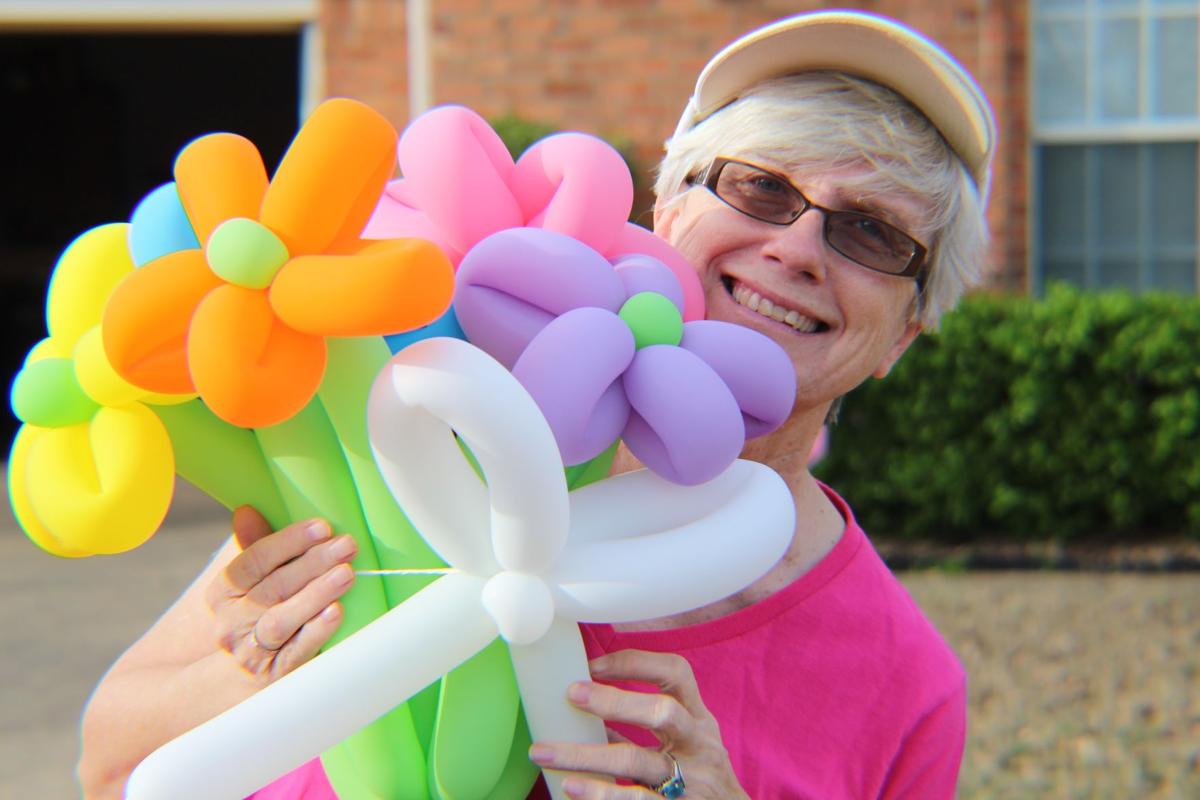 Jean Bakken, a Southaven balloon artist/entertainer, provides some positive vibes in the COVID-19 pandemic gloom with her brightly colored bouquets. Bakken’s weekend idea to put a bouquet on her mailbox has taken off with several people asking for similar bouquets for mailboxes or just to include in their homes. 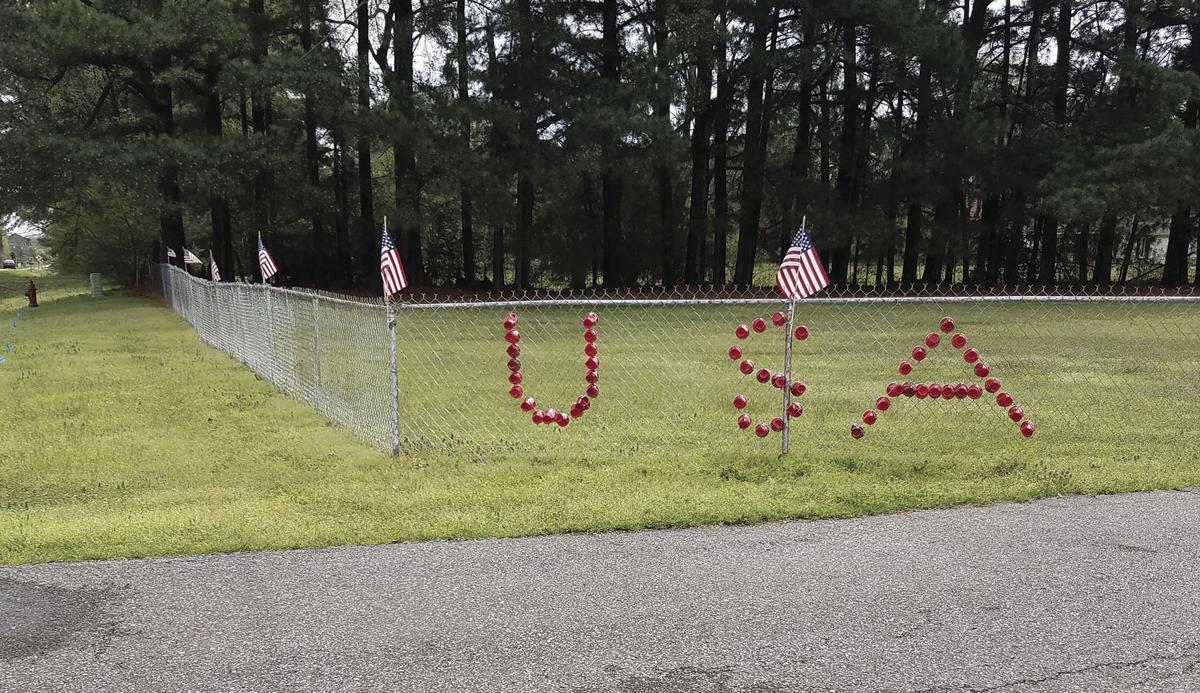 This residence shows its patriotism and love of country in the midst of the pandemic attacking the country. The Eldred family, dealing with a family member recovering from the virus, felt it was important to continue displaying their support for the nation, as what happened in the U.S. after the 9/11 attacks.

Jean Bakken, a Southaven balloon artist/entertainer, provides some positive vibes in the COVID-19 pandemic gloom with her brightly colored bouquets. Bakken’s weekend idea to put a bouquet on her mailbox has taken off with several people asking for similar bouquets for mailboxes or just to include in their homes.

This residence shows its patriotism and love of country in the midst of the pandemic attacking the country. The Eldred family, dealing with a family member recovering from the virus, felt it was important to continue displaying their support for the nation, as what happened in the U.S. after the 9/11 attacks.

It’s been a dreary, sad time with the discovery and growing threat of novel coronavirus, across the globe as well as in DeSoto County.

In the midst of the gloom and gray, punctuated by the continual periods of rainfall in the county, there are still people who seek to pass on on a bit of sunshine through the clouds.

For some, it may be a momentary smile with a glimpse of color, while for others, it is the acknowledgment the virus has reached their home, but still, they have the trust of the government and health officials in addressing the health threat. They’re finding unique ways to respond to the wide-ranging effects of the virus.

Take Jean Bakken of Southaven, for instance. During the week, when school is in session, Bakken is a teacher’s assistant at Pleasant Hill Elementary School in Olive Branch.

When she is not working with first-graders, Bakken is found entertaining and bringing smiles to youngsters as a balloon twister and entertainer, known in the Mid-South as Miss B-Loonie. She has made appearances at locations like the Children’s Museum of Memphis and the National Civil Rights Museum, as well as being found at some local restaurants and at special events, like birthday parties.

This past weekend, Bakken decided it was time to use her talents for a positive purpose.

“Last Friday, with the weather all gloomy and gray, I felt that I needed to bring some colors into my spirit,” she said. “So, being a balloon artist, I set about making a balloon bouquet that I could tie on my mailbox where it would be seen by my neighbors and passing motorists. I took a photo of it and posted it on social media. Almost immediately, people responded wanting a bouquet to put on their mailboxes.”

Her balloon bouquets are called “Sonshine Bouquets” as a clever acknowledgment of her faith and the positive message she wanted to share.

“People were leaving comments on my social media site saying things like, 'I want one' and 'Where can I get one?',” Bakken recalled.

People can search for Miss B-Loonie on Facebook and ask for a bouquet there, and while she did not set out for compensation, recipients have been gracious to offer that to her.

“I've not asked for money for any of the bouquets during this stressful time,” Bakken said. “ Yet people insist on paying me something, so I tell them to just leave a little something in the mailbox and I'll get it.”

While Miss B-Loonie has displayed a desire to bring smiles to a sad situation, there are others who have stepped to help out as best as they can. Schools and churches are offering food, people have stepped up to collect material to make masks for distribution, teachers continue making connections through technology with their students to keep instructing them.

One person was even inspired to make red bows to show support for medical personnel.

There are people in DeSoto County who are especially benefitting from the support, those who have tested positive for coronavirus, are dealing with the symptoms, and are waiting for the virus to disappear from them.

In one case, a DeSoto County family has chosen to take their situation with the virus and express that they are backing their country through the pandemic.

Tommy Eldred is waiting out the quarantine imposed once it was learned he had contracted coronavirus, making him one of the statistics when we hear of cases in DeSoto County.

At 76 years old and in perfect health, Eldred apparently caught the virus when he and his wife Patsy attended a volleyball tournament recently in Bentonville, Arkansas, mingling with crowds and even visiting a grocery store.

Within a day or so after returning from Arkansas, Patsy said Tommy started to feel the effects of the virus.

“We were going out,” Patsy said. “But he said he just couldn't get up, which was unusual since his health has always been perfect.”

Tests were run by a physician and initially, it was thought he had viral pneumonia, but Tommy was later taken to a clinic, referred to a hospital, and tested for coronavirus.

The Eldreds went home and self-quarantined themselves waiting for the results, which confirmed that Tommy had come down with COVID-19. He now has to wait until March 30, the end of his 14-day required quarantine.

“As of right now, he is doing much better,” Patsy said. “His temperature has stabilized within two degrees of normal and he is eating well. He is also drinking a lot of water.”

Instead of just sitting and waiting inside, the Eldreds have decided they would at the least express their continued support of the country trying to fight the pandemic through their situation.

A multiple of American flags appeared across the country when the World Trade Center towers were struck by terrorists on 9/11. In a small way, the Eldreds have announced through a display of flags on their residential fence and the spelling of the letters “USA” that they are showing their patriotism through this new “war” on the country.

While some seek to bring smiles in a dreary time and others deal with the virus through a show of patriotism, DeSoto County and the rest of the country are finding ways of positively responding to the latest attack on our health and livelihood.